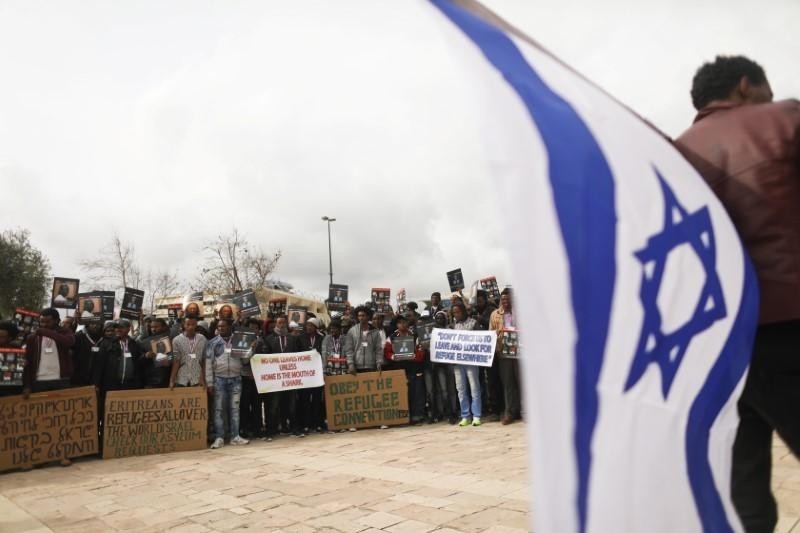 Israel's prime minister said late Monday he has suspended an agreement with the U.N. to resettle African migrants in Western countries, just hours after unveiling the agreement on national TV.

In a Facebook post, Benjamin Netanyahu said he will discuss the deal with Israeli residents of south Tel Aviv on Tuesday. He added that in the meantime, "I am suspending the implementation of the agreement, and after meeting with the representatives I will re-examine the agreement again."

"It's a good agreement," Netanyahu had told reporters earlier. "It enables us to solve this problem in a way that serves, protects the interests of the state of Israel and gives a solution to the residents of southern Tel Aviv and other neighborhoods, and also for the people who came into Israel."

The deal also lifts the threat of a forced expulsion to unnamed African destinations, widely believed to be Rwanda and Uganda, with whom Israel has reached a secret agreement.

The Africans, nearly all from dictatorial Eritrea and war-torn Sudan, say they fled for their lives and faced renewed danger if they returned. Israel has said it considers the vast majority of the 35,000-40,000 migrants to be job seekers and has said it has no legal obligation to keep them.

Critics at home and in the Jewish American community have called the government's proposed response unethical and a stain on Israel's image as a refuge for Jewish migrants.

As the world grapples with the worst refugee crisis since World War II, the issue has struck a raw nerve in Israel — established in the aftermath of the Holocaust.

The optics of black asylum seekers accusing the country of racism has turned into a public relations liability for Israel, and groups of Israeli doctors, academics, poets, Holocaust survivors, rabbis and pilots have all appealed to halt the plan. Before Monday's announcement, the government had remained steadfast, bristling at what it considers cynical comparisons to the plight of Jews in Nazi Germany.

The Africans started moving toward Israel in 2005, after neighboring Egypt violently quashed a refugee demonstration and word spread of safety and job opportunities in Israel. Tens of thousands crossed the porous desert border before Israel completed a barrier in 2012 that stopped the influx. But Israel struggled with what to do with those already in the country, alternating between plans to deport them and offering them menial jobs in hotels and local municipalities.

Over the years, Israel had threatened migrants with prison, placed them in a now-shuttered desert detention camp and tried to persuade them to leave by offering them money and a one-way ticket to Africa. After those options failed, it announced plans to begin deporting them to an unnamed African country — believed to be Rwanda or Uganda — on April 1.

Thousands of the migrants concentrated in neighborhoods in south Tel Aviv, where ethnic food shops and phone card stalls line the streets, and the area has become known as "Little Africa." This has sparked tension with the working-class Jewish residents who have been putting pressure on the government to find a solution.

Netanyahu's office said that legal obstacles and ensuing problems with the proposed third-country African destinations forced the government to amend its plans and come to an agreement under U.N. auspices. It says the new framework will include a development and rehabilitation plan for southern Tel Aviv.