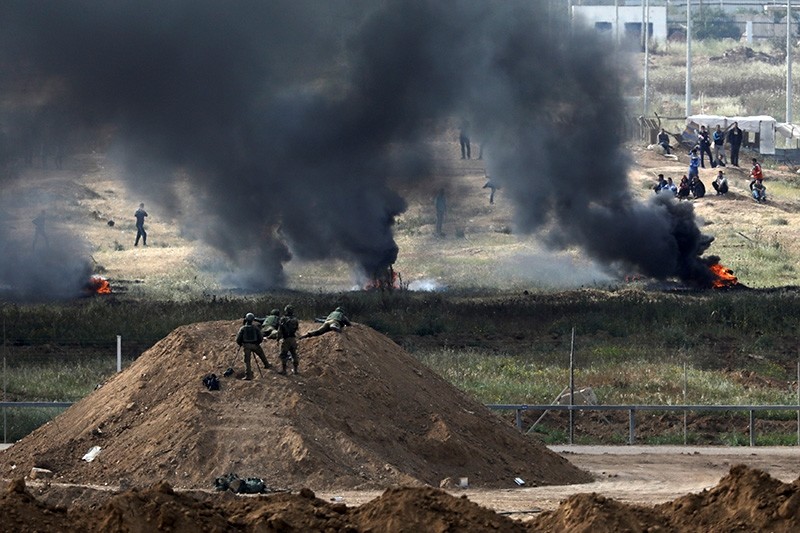 Israeli soldiers are seen next to the border fence on the Israeli side of the Israel-Gaza border, as Palestinians protest on the Gaza side of the border, Israel April 5, 2018. (Reuters Photo)
by Anadolu Agency Apr 05, 2018 12:00 am

Israeli forces have used internationally-banned weapons against unarmed demonstrators near the border between Gaza and Israel, a Palestinian rights group asserted Thursday.

"We have received information indicating the use of internationally-prohibited weapons by occupation forces -- including exploding bullets -- with the aim of causing the greatest number of injuries," Essam Younis, head of the Independent Commission for Human Rights, said at a press conference.

According to Younis, the Israeli army "has deliberately killed civilians by targeting them directly, as evidenced by numerous injuries to the upper part of the body, specifically the head, neck and chest."

He went on to urge international rights organizations to shoulder their legal and humanitarian responsibilities and work towards preventing Israel's ongoing violations against Palestinian civilians.

A total of 20 Palestinian protesters have been killed since last Friday, when mass rallies began along the Gaza Strip's eastern border with Israel.

According to the Palestinian Health Ministry, more than 1,500 Palestinian demonstrators have been injured -- many seriously -- over the same period.

Last Friday's border rallies kicked off a six-week demonstration that will culminate on May 15, which will mark the 70th anniversary of Israel's establishment -- an event Palestinians refer to as the "Nakba" or "Catastrophe."

Demonstrators demand that Palestinian refugees be granted the "right of return" to their towns and villages in historical Palestine, from which they were driven in 1948 to make way for the new state of Israel.

In the run-up to the mass demonstrations last week, Israel deployed thousands of troops on the border, threatening to use live ammunition against anyone who threatened Israel's "security infrastructure."