Netanyahu concerned over Trump’s plan to withdraw from Syria 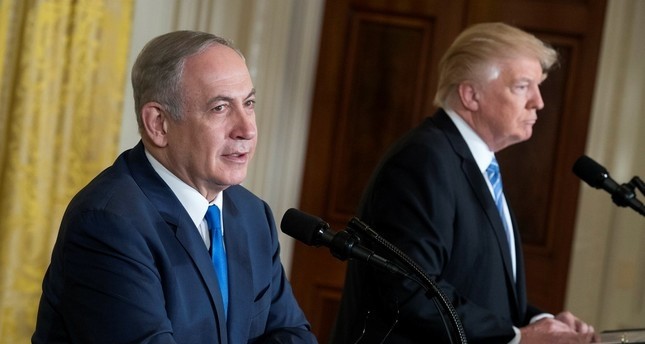 Israeli Prime Minister Benjamin Netanyahu (L), with US President Donald J. Trump (R), responds to a question from the news media during a joint press conference in the East Room in of White House in Washington, DC, USA, 15 February 2017. (EPA Photo)
by Daily Sabah with Wires Apr 05, 2018 12:00 am

Israeli Prime Minister Benjamin Netanyahu is concerned over U.S. President Donald Trump's plan to withdraw from Syria and has tried to convince him not to, U.S. officials speaking on condition of anonymity said Wednesday.

A phone call earlier on the same day between Trump and Netanyahu grew tense over the Israeli leader's concerns that the U.S. will withdraw and allow Israel's enemies to gain a further foothold in a neighboring country.

In his haste to withdraw from Syria, Trump stands alone. The Pentagon, the State Department and CIA are all deeply concerned about the potential ramifications if the U.S. leaves behind a power vacuum in Syria, as are Israel, Arab leaders and other nations in the U.S.-led coalition that has fought Daesh terrorist group in Iraq and Syria since 2014.

U.S. President Donald Trump first made his surprise announcement on March 29, saying the U.S. would withdraw from Syria in the near future.

On the other hand, General Joseph Votel, the commander of the U.S. Central Command which coordinates anti-Daesh operations in Iraq and Syria, implied that the United States will not yet leave Syria, saying there "are still some areas where Daesh terrorists are present."