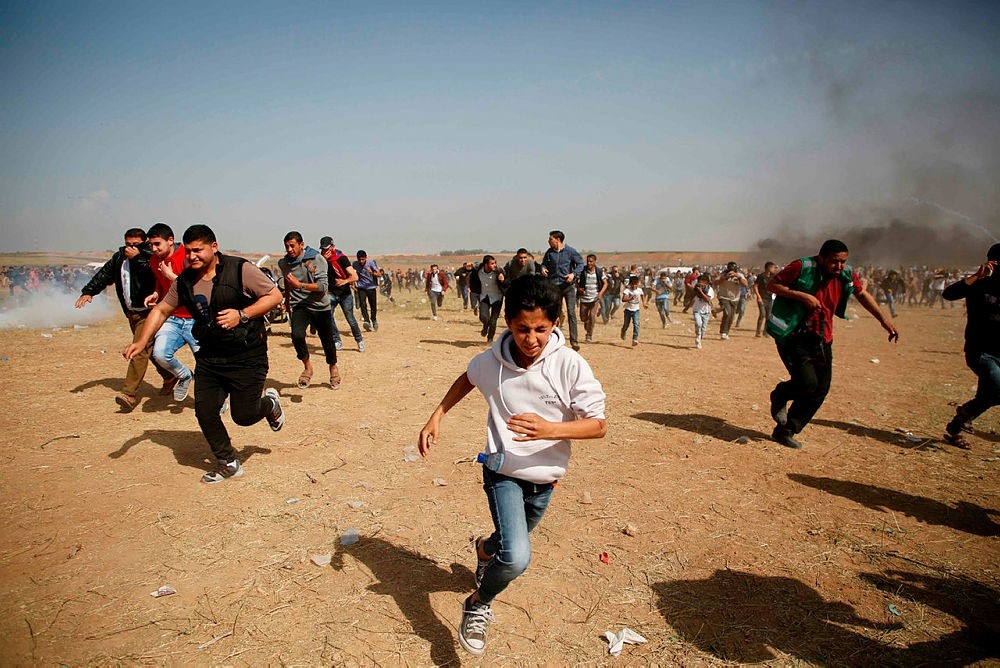 Palestinians run for cover from tears gas fired by Israeli security forces at a protest on the Israel-Gaza border east of the Jabalia refugee camp in the northern Gaza Strip on April 6, 2018. (AFP Photo)
by daily sabah Apr 06, 2018 12:00 am

An Israeli army spokesman on Friday used images of Palestinian children participating in protests targeted by an Israeli sniper's gunsight.

Israeli military spokesman Avichay Adraee wrote on his Arabic-language Twitter page that no one can hide from Israeli forces, by using a photo of a scope aiming at Palestinian children carrying tires to create a smoke screen to block the view of Israeli snipers.

"Those who think they can hide from our lenses are mistaken, we can see you clearly. We will never let anyone put the security of Israel and its citizens in danger. Stop being naive and don't put yourself in danger," the tweet read.

On Friday, Israeli troops killed six men in the second mass protest and injured more than 780 Palestinian protesters along the Gaza borders. Friday's deaths brought to 28 the number of Palestinians killed by Israeli fire over the past week.

Videos from the protests showed Palestinian demonstrators torching large piles of tires, engulfing the area in black smoke meant to shield them from Israeli snipers; the faces of some of the activists were covered in black soot.

Israeli troops on the other side of the fence responded with live fire, tear gas, rubber coated steel pellets and water cannons.

Israel has drawn sharp criticism for its open-fire orders along the border, including its warnings that those approaching or trying to damage the fence would be targeted.

Rights groups have branded orders permitting the use of lethal force against unarmed protesters as unlawful. A leading Israeli rights group, B'Tselem, issued a rare appeal to Israeli soldiers this week to refuse the "grossly illegal" open-fire orders.