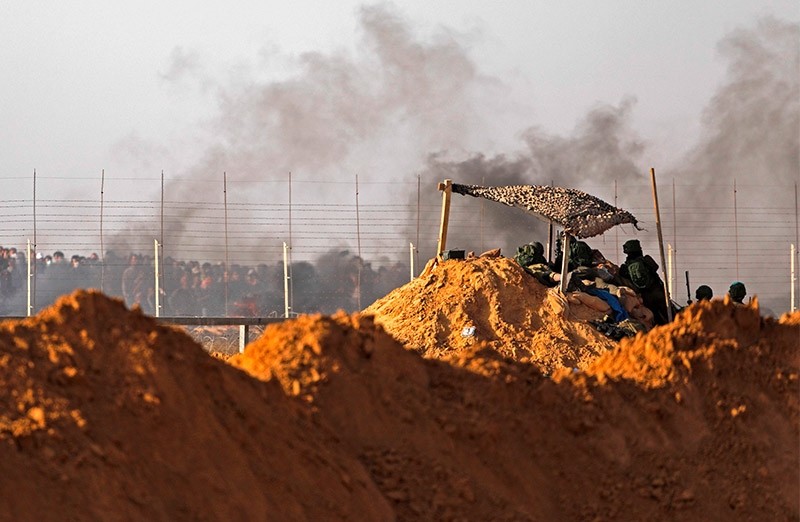 Israeli snipers watch Palestinian demonstrators on the Israeli border with the southern Gaza Strip as smoke billows from tyres burnt by Palestinians. (AFP Photo)
by Associated Press Apr 06, 2018 12:00 am

Israeli troops killed nine men and injured more than 1,000 in the second mass protest in a week along Gaza's border, as Palestinians torched piles of tires to create a smoke screen to block the view of snipers.

Friday's death brought to 31 the number of Palestinians killed by Israeli fire over the past week, including 23 protesters. Gaza health officials earlier said 780 people were hospitalized Friday, but did not provide details on injuries.

Riyad Mansour told reporters at U.N. headquarters in New York late Friday that one child is among the dead and a large number of children were injured, at least 48 according to one report. He said his information comes from Health Ministry and Red Crescent officials in Gaza.

Mansour condemned "these massacres in the strongest possible terms" and demanded a halt and an independent investigation. The Arab League's U.N. Ambassador Maged Abdelaziz echoed his condemnation and demands.

Kuwait's U.N. Ambassador Mansour Al-Otaibi, the Arab representative on the Security Council, said a press statement has been circulated to members, almost identical to one blocked last week by the United States, that among other things calls for an independent and transparent investigation. The deadline for objections is 6 p.m. EDT.

In remarks clearly aimed at White House envoy Jason Greenblatt, Mansour denounced a statement that condemned Palestinians for calling for violence and sending protesters to the Gaza-Israeli border but never mentioned Israel's "behavior" or urged restraint against firing on civilians.

"Shame on those who issue such statements, and they are totally on the side of the Israelis and condoning their behavior," Mansour said.

Friday's march was the second in what Gaza's Hamas rulers said would be several weeks of protests against a decade-old border blockade of the territory. Israel has accused the Palestinian group of using the protests as a cover for attacking Israel's border, and has warned that those approaching the fence put their lives at risk.

On Friday, thousands of Palestinians streamed to five tent encampments that organizers had set up, each about several hundred meters from the border fence.

In one camp near the border community of Khuzaa, smaller groups of activists moved closer to the fence after Friday's noon prayers.

Associated Press video showed demonstrators torching large piles of tires, engulfing the area in black smoke meant to shield them from Israeli snipers; the faces of some of the activists were covered in black soot.

Israeli troops on the other side of the fence responded with live fire, tear gas, rubber coated steel pellets and water cannons.

Later on Friday, the shadowy Hamas leader in Gaza, Yehiyeh Sinwar, visited the Khuzaa camp, receiving a hero's welcome. He was surrounded by hundreds of supporters who chanted, "We are going to Jerusalem, millions of martyrs."

Sinwar told the crowd that the world should "wait for our great move, when we breach the borders and pray at Al-Aqsa," referring to the Al-Aqsa Mosque.

It appeared to be the first time a Hamas leader specifically threated to break through the border — something Israel has said it would not allow at any price.

The Israeli military said protesters on Friday hurled several explosive devices and firebombs under cover of smoke, and that several attempts to cross the fence were thwarted. The military said it brought in a huge fan to disperse the tire smoke.

After the first tires started burning, several young men with gunshot wounds began arriving at a field clinic at the camp.

Mohammed Ashour, 20, who had been among the first to set tires on fire, was shot in the right arm.

"We came here because we want dignity," he said resting on a stretcher before paramedics transported him to the strip's main hospital.

Yehia Abu Daqqa, a 20-year-old student, said he had come to honor those killed in previous protests.

"Yes, there is fear," he said of the risks of advancing toward the fence. "We are here to tell the occupation that we are not weak."

Hamas had billed the final protest, set for May 15, as the "Great March of Return" of Palestinian refugees and their descendants, implying they would try to enter Israel. But the group stopped short of specifically threatening a mass breach of the border fence.

Israel has drawn sharp criticism for its open-fire orders along the border, including its warnings that those approaching or trying to damage the fence would be targeted.

Rights groups have branded orders permitting the use of lethal force against unarmed protesters as unlawful. A leading Israeli rights group, B'Tselem, issued a rare appeal to Israeli soldiers this week to refuse the "grossly illegal" open-fire orders.

Conricus said that under "clear rules of engagement" snipers are used "sparingly" and only against those that pose a "significant threat."