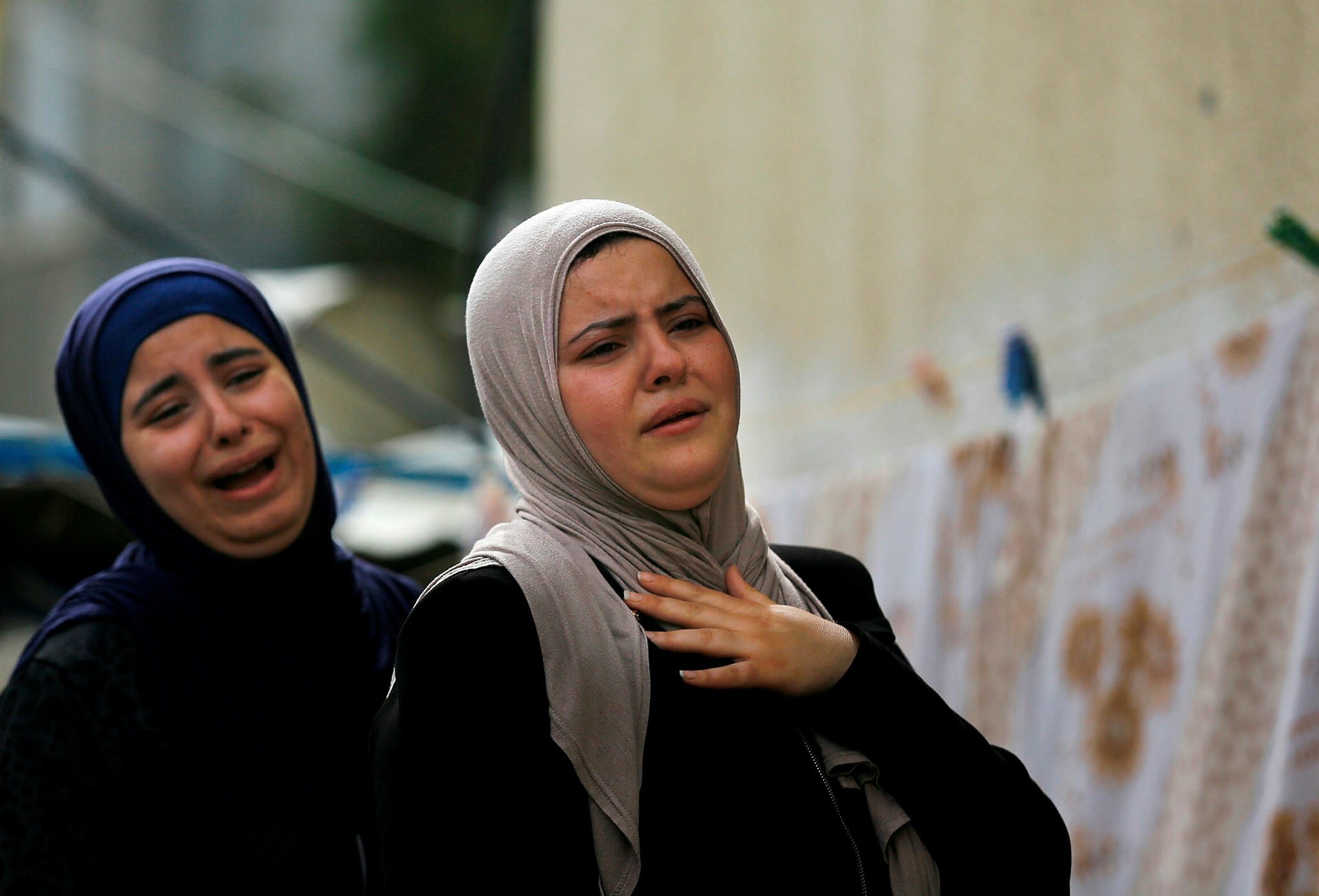 Mourning relatives of a Palestinian who was killed during clashes on the Gaza-Israel border, Gaza City, April 5.
by Compiled from Wire Services Apr 06, 2018 12:00 am

Despite calls on Israel to give up the open-fire rules for the Gaza border, Israel continues to target civilians, bringing the Palestinian death toll in a week of border protests to 19

Israeli fire killed a Palestinian at the Gaza border yesterday and another died of wounds suffered several days ago, health officials said. The fatalities bring to 19 the number of people killed in protests in Gaza border over the past week.

As the Israeli army has continued to use live ammunition against Palestinians, Defense Minister Avigdor Lieberman said yesterday that open-fire rules are for the Gaza border. "If there are provocations, there will be a reaction of the harshest kind like last week," Lieberman said on the eve of fresh protests expected on the Gaza-Israel border, as reported by Agence France-Presse (AFP). "We do not intend to change the rules of engagement," the minister told public radio.

The latest deaths are likely to add to international concerns over the violence, which human rights groups have said involved live fire against unarmed demonstrators posing no immediate threat to life. A leading Israel human rights group urged Israeli forces in a rare step Wednesday to disobey open-fire orders unless Gaza protesters pose an imminent threat to soldiers' lives. B'Tselem said the appeal is a last-ditch attempt to prevent more bloodshed on the volatile Gaza-Israel border. B'Tselem has never before called on soldiers to refuse orders, but believes firing on Palestinians who pose no imminent threat to the lives of Israeli forces is "manifestly illegal," said spokesman Amit Gilutz. "As long as soldiers in the field continue to receive orders to use live fire against unarmed civilians, they are duty bound to refuse to comply," the group said.

Israel has faced calls for an independent investigation from the EU and U.N. Secretary-General Antonio Guterres over Friday's violence. Guterres has called for an independent investigation into Friday's deaths and appealed to those involved to refrain from any act that could lead to further casualties or place civilians in harm's way. Israel has rejected the calls, saying its soldiers opened fire when necessary to prevent attacks, attempts to damage the fence and infiltrations.

In addition to the 19 Palestinians killed, more than 1,400 were wounded Friday, 758 of them by live fire, with the remainder hurt by rubber bullets and tear gas inhalation, according to the health ministry in Gaza. Palestinians accused Israel of using disproportionate force, saying its soldiers opened fire on protesters who did not pose a threat, while human rights groups questioned Israel's use of live fire.

The protest is scheduled to culminate on May 15, when Palestinians mark the "Nakba" or "Catastrophe" when hundreds of thousands fled or were driven out of their homes in 1948, when the state of Israel was created. Israel has long ruled out any right of return, fearing it would lose its Jewish majority. Israel withdrew from Gaza in 2005, but citing security concerns, still tightly controls its land and sea borders. Egypt also keeps its Gaza frontier largely shut.