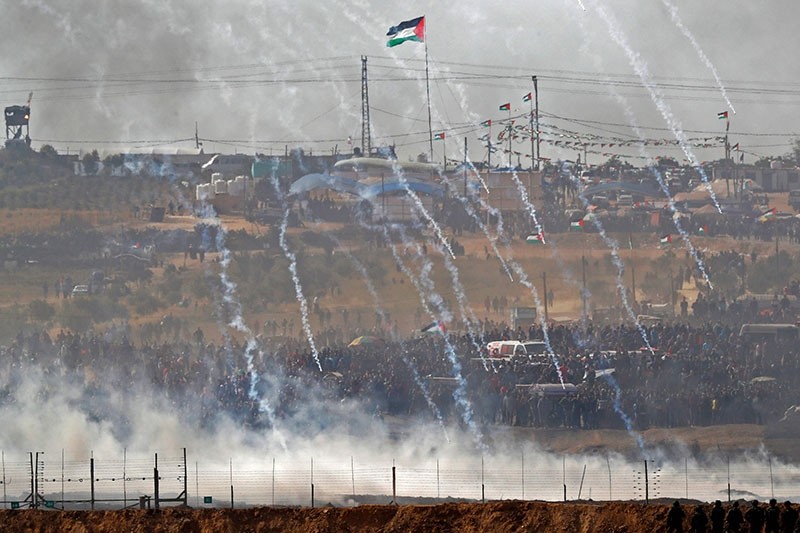 A picture taken on April 13, 2018 from the southern Israeli kibbutz of Nahal Oz across the border with Gaza Strip shows tear gas canisters launched by Israeli forces falling down on Palestinian protestors gathering along the border fence. (AFP Photo)
by Compiled from Wire Services Apr 13, 2018 12:00 am

One protester was killed and hundreds of Palestinian protesters were injured by live ammunition and tear gas fired by Israeli troops on Friday, as demonstrations in the Gaza Strip extended to a third straight week, albeit in smaller numbers than previous weeks.

Israeli live fire from across the border fence killed a 28-year-old Palestinian man and wounded at least 223, Gaza health officials said. The death brought to 35 the number of protesters killed, with hundreds wounded by Israeli fire since March 30.

The majority of the fatalities occurred during the demonstrations, while 1,236 have suffered from bullet wounds, according to the Hamas-controlled ministry. Some of those killed were militants, the Israeli army said.

The protests since March 30 have posed a challenge to Israel, which has dismissed criticism of its use of live fire, saying its rules of engagement are necessary and will not change.

Organizers were calling on Friday's demonstrators to burn Israeli flags and raise Palestinian ones.

At a protest camp there, a large Israeli flag was placed on the ground for demonstrators to walk on.

In the northern Gaza Strip, Sumaya Abu Awad, 36, attended the protest with her three daughters and son.

"I am from the village of Hiribya and it is my right to return to it," she said, referring to a village north of Gaza destroyed in the 1948 war surrounding Israel's creation.

"I am not afraid of death because there is no life in Gaza already."

Last week, protesters burned mounds of tires, sending plumes of smoke into the air in the border area. Israeli soldiers used large fans in a bid to push the smoke away.

The protests, planned to last six weeks, are calling for Palestinian refugees to return to their former homes that are now inside Israel -- which Israelis say essentially amounts to calling for the country's destruction.

The first two Fridays -- with far less on intervening days -- saw tens of thousands gather near the border with Israel at five locations.

Smaller numbers approached the fence, throwing stones and rolling burning tires toward soldiers taking up positions on the other side.

Israel accuses Hamas, the Islamist movement that runs Gaza and with whom it has fought three wars since 2008, of using the protests as cover to carry out violence.

It has pledged to stop attacks, damage to the fence and infiltration bids, and says there have been attempts at all three.

But Palestinians say protesters are being shot while posing no threat to soldiers, and UN Secretary-General Antonio Guterres and the European Union have called for an independent investigation.

The dead from last Friday included a journalist, Yasser Murtaja, who witnesses said was wearing a press vest at the time he was shot.

Israel claimed he was a paid member of Hamas, but produced no evidence.

The company Murtaja co-founded had been vetted for US government funding, while an international journalists federation said he was harassed and beaten by Hamas police in 2015.

Rights groups have strongly criticized Israeli forces while pointing to unverified videos that have spread online of Gazans appearing to be shot, including one seeming to show a Palestinian targeted as he ran away from the fence while holding a tire.

Hamas officials have said in recent days they want this week's protest to see less bloodshed and hope to keep momentum building for May 14, when the United States is expected to move its Israel embassy from Tel Aviv to Jerusalem.

The embassy move has deeply angered the Palestinians, who see the Israel-annexed eastern sector of Jerusalem as the capital of their future state.

Organizers also again said they want the protest to be peaceful this week, but it is unclear to what extent they or even Hamas remain in control.

The official end date of the protests is May 15, when Palestinians mark the Nakba, or "catastrophe," commemorating the more than 700,000 who fled or were expelled during the 1948 war surrounding Israel's creation.

Gaza has been under an Israeli blockade for more than 10 years, while its border with Egypt has also been largely closed in recent years.

In a rare move, Egypt opened its crossing with Gaza on Thursday and it will remain open until Saturday.

Israeli media reports have said Egypt, one of only two Arab countries to have signed a peace treaty with the Jewish state, had been negotiating with Hamas to seek to calm the crisis, but there has been no confirmation.