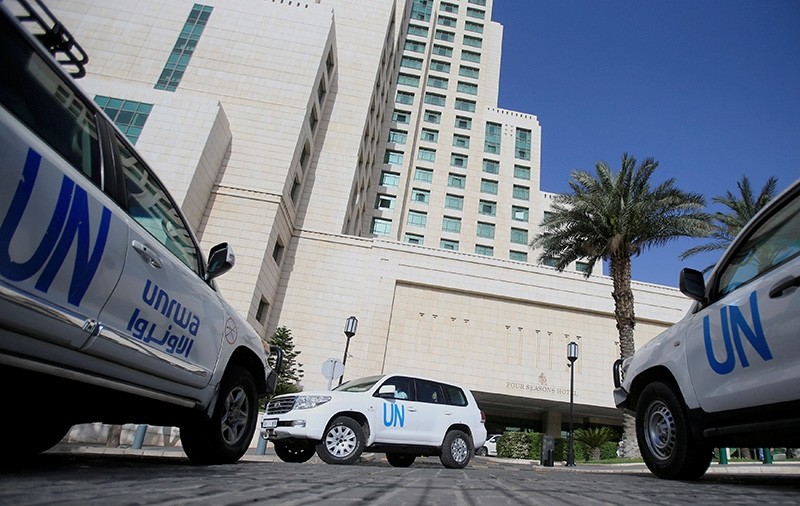 The United Nation vehicle carrying the Organisation for the Prohibition of Chemical Weapons (OPCW) inspectors is seen in Damascus, Syria April 18, 2018. (Reuters Photo)
by Compiled from Wire Services Apr 18, 2018 12:00 am

The head of the Organization for the Prohibition of Chemical Weapons said Wednesday that a U.N. security team doing reconnaissance in Douma, Syria came under gunfire a day earlier, sources told Reuters.

OPCW Director General Ahmet Üzümcü told a meeting at the organization's headquarters in The Hague that the security team was forced to withdraw, delaying the arrival of chemical weapons inspectors due to visit the site. Sources present at the closed-door meeting briefed Reuters on Üzümcü's remarks.

International inspectors were still waiting to visit the site of an alleged chemical weapons attack in Syria on Wednesday, as the U.S. accused the Syrian government and its ally Russia of trying to cover up the evidence.

It has been 11 days since the alleged attack on Douma, a town outside Damascus that at the time was controlled by an opposition group that surrendered in the days after the attack.

The U.S., France, and Britain launched missile strikes against suspected chemical weapons facilities one week later, after concluding that Syrian President Bashar Assad's forces were behind the attack.

The three countries did not make their evidence public, and both the Syrian government and its ally Russia have denied any chemical attack took place. Russia has accused rebels of staging the attack with support from Britain, an allegation that Britain has strongly denied.

Syrian state media reported Tuesday that inspectors from the Organization for the Prohibition of Chemical Weapons had entered Douma, but the Syrian government later said that only a U.N. advance security team had entered.

U.S. State Department spokeswoman Heather Nauert said Tuesday the U.S. did not believe the inspectors had entered Douma, and that the evidence was at risk of decaying as delays dragged on.

"We've seen that the Russian government and the Syrian government — their whole goal in this is to try to cover up. Their goal is to try to deflect attention," she said. "But the fact of the matter is that Bashar al-Assad is responsible yet again for gassing and killing innocent men, women and children."

There was no comment from the OPCW or the U.N.'s security department.

Russia's military said it uncovered a chemical weapons stockpile left behind by rebels in Douma on Tuesday. The claim could not be independently verified.

Survivors reached by the Associated Press said they were overwhelmed by the smell of chlorine on the night of April 7. Activists say at least 40 people were killed. Many were found with foam around their mouths, an indicator for suffocation. Medical workers said they treated symptoms including difficulty breathing and fainting.

The U.N.-mandated Independent International Commission on Syria has documented more than 30 chemical attacks in Syria between 2013 and the end of 2017 — and says at least 25 of them were carried out by the Syrian military. For the rest, it had insufficient evidence to determine the perpetrator.