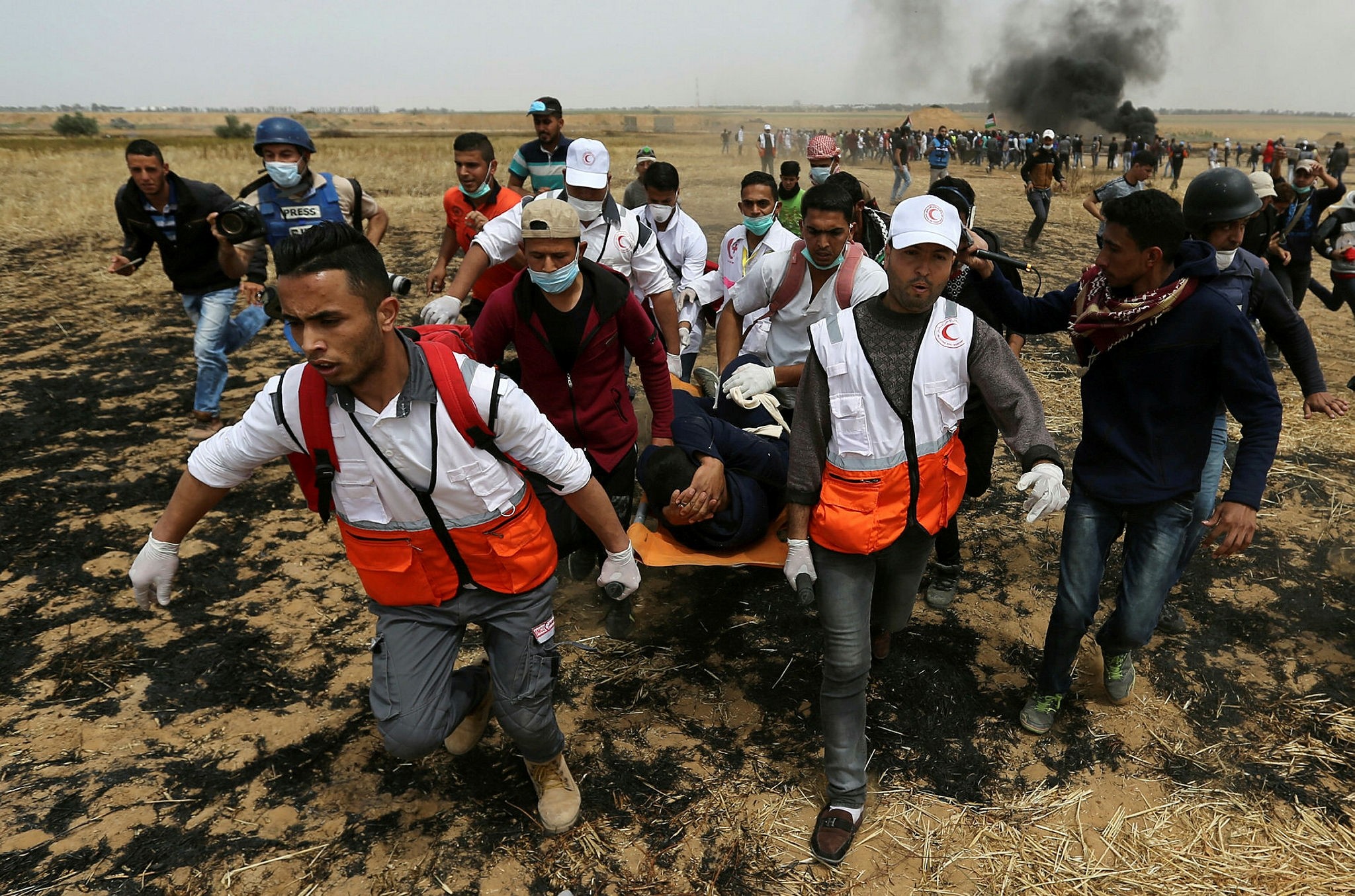 A wounded Palestinian is evacuated during clashes with Israeli troops at the Israel-Gaza border, southern Gaza Strip, April 20.
by Compiled from Wire Services Apr 21, 2018 12:00 am

Earlier Friday, Israeli military aircraft had dropped leaflets urging Palestinians to stay away from the fence and warning that they endanger their lives if they follow directives of Gaza's Hamas rulers, who have taken the lead in organizing the protests.Israeli daily Yedioth Ahronoth reported that Israeli army planes had dropped flyers over the Gaza Strip warning would-be protesters to refrain from approaching or attempting to damage the border fence, according to Anadolu Agency (AA).

"You are strongly advised not to participate in acts of violence against Israeli army troops or Israeli citizens," the flyers read, according to the newspaper.

The flyers went on to warn that Israeli forces would "use any means necessary" to preempt perceived "acts of violence" by Palestinian protesters.

Israel has faced international criticism for its response to the mass marches. Rights groups have branded open-fire orders as unlawful, saying they effectively permit soldiers to use potentially lethal force against unarmed protesters.

White House envoy Jason Greenblatt, a member of President Donald Trump's Mideast team, said on social media that Palestinians in Gaza have a "right to protest their dire humanitarian circumstances."Organizers "should focus on that message, not stoke the potential for more violence with firebombs and flaming kites, and must keep a safe distance from the border," said Greenblatt, adding, "The cost of these demonstrations is too high in loss of life and injuries," as reported by the Associated Press (AP).

The protests are to continue at least until May 15, the anniversary of Israel's 1948 creation. Palestinians mark the day as their "nakba," or catastrophe, when hundreds of thousands fled or were driven from their homes in the Mideast war over Israel's founding.

On Thursday, organizers moved sit-in protest tents, each set up several hundred meters from the border, closer to the fence. Organizers said they will gradually move the camps toward the fence until May 15, but have made conflicting comments about a possible mass border breach.Hamas says the protests are aimed at breaking a crippling border blockade that was imposed by Israel and Egypt after the Palestinian resistance group overran the territory in 2007, a year after winning Palestinian parliament elections.

The marches also press for the return of Palestinian refugees and their descendants to what is now Israel. While Hamas and smaller Palestinian factions have taken a lead as organizers, the mass marches are also fueled by growing desperation among Gaza's 2 million residents.

The border blockade has trapped nearly all of them in the tiny coastal territory, gutted the economy and deepened poverty. Gaza residents typically get fewer than five hours of electricity per day, while unemployment has soared above 40 percent.