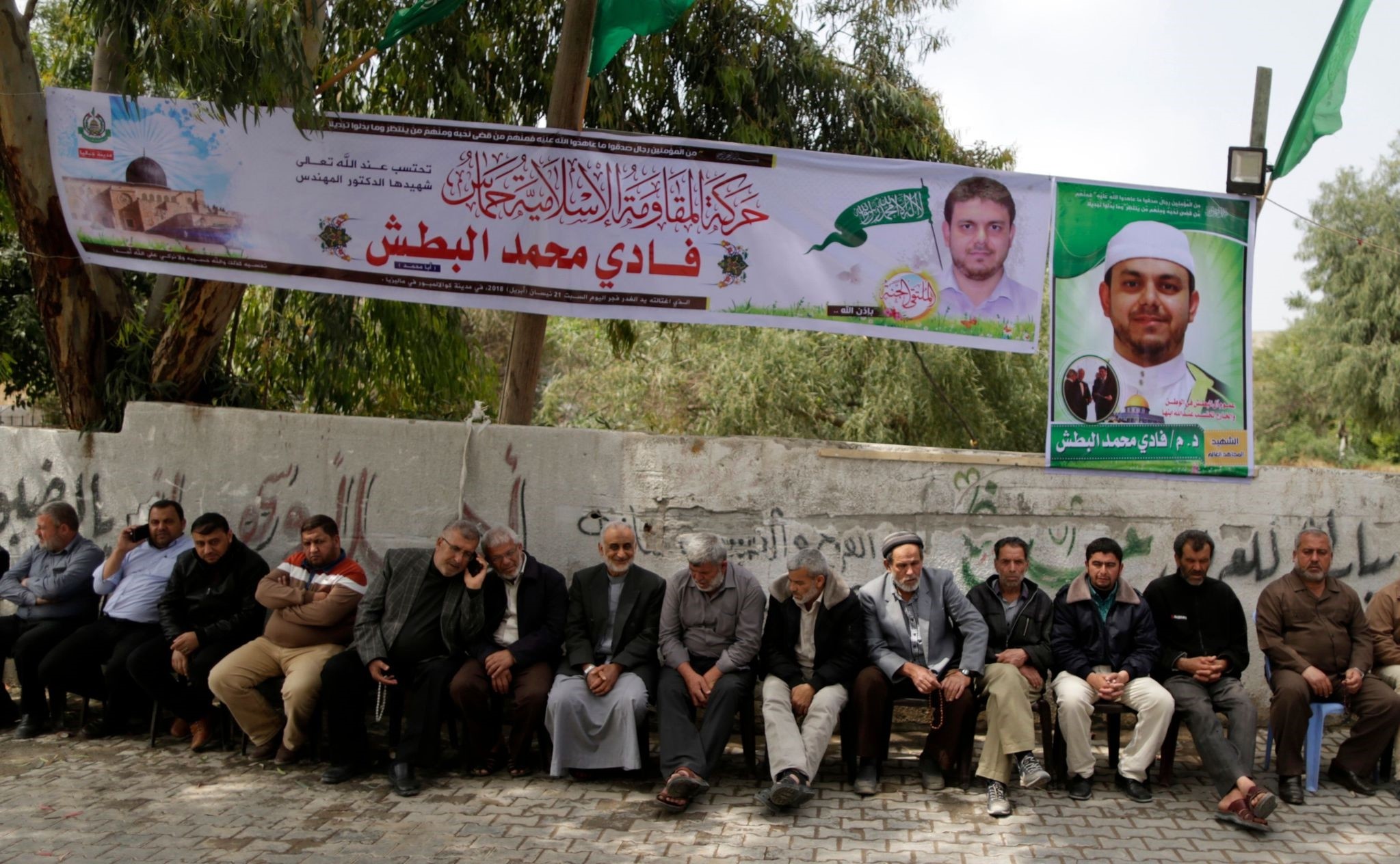 Palestinians gather in mourning outside the family home of 35-year-old professor and Hamas member Fadi Mohammad al-Batsh, who was killed early in the day in Malaysia, in Jabalia in the northern Gaza strip. (AFP Photo)
by Daily Sabah with Agencies Apr 21, 2018 12:00 am

A Palestinian man was fatally shot by two assailants on a motorbike as he was heading to a mosque for dawn prayers, Malaysian police said Saturday.

The man was identified as a relative of a senior official in the Gaza branch of the Islamic Jihad group by Palestinian news outlets.

Palestinian Ambassador Anwar H. Al Agha was quoted by the New Straits Times newspaper as saying the victim was Fadi M. R. al-Batsh, a second imam at the mosque. He had been reportedly living in Malaysia for 10 years.

Al-Batsh's family, as well as a senior Islamic Jihad leader, Khaled al-Batash, have accused Israel's Mossad intelligence service of being behind the murder. The family said that al-Batsh was supposed to have left for Turkey on Saturday to attend a conference on energy.

In an interview on the television network Al-Miyadin, Khaled al-Batash demanded that Malaysia "conduct a comprehensive and rapid investigation to prevent the escape of the assassins."

When asked who he blamed, he replied: "The Israeli Mossad. The Israeli Mossad stood behind the assassination of educated people and intellectuals because Israel knows Palestine will be liberated by scientists."

Malaysian police say they are investigating all angles, including terrorism.

"The suspect fired 10 shots, four of which hit the lecturer in the head and body. He died on the spot," the official Bernama news agency quoted Kuala Lumpur police chief Mazlan Lazim as saying.

Mazlan said a recording of a closed-circuit television camera near the scene showed the two assailants waited for about 20 minutes for the Palestinian lecturer.

"We believe the lecturer was their target because two other individuals walked by the place earlier unharmed," he said.

He added the victim had links with foreign intelligence and was active in pro-Palestinian non-governmental organisations, describing him as an expert in electrical engineering and rocket-building.

The victim could have been seen as "a liability for a country that is an enemy of Palestine," Zahid was quoted as saying by Bernama.

Hamas, which exercises de facto control over Gaza, said one of its members was "assassinated" in Malaysia but stopped short of accusing Israel's secret service of carrying out the killing.

A Hamas statement said Batsh was "assassinated at treacherous hands on Saturday...as he walked for the dawn prayers."

The Israeli government had no comment. But Israel has a long history of suspected targeting of wanted Palestinian militants in daring overseas operations around the globe and has been linked to other assassinations as well, though it has never acknowledged them.

Al-Batsh specialized in electrical and electronic engineering and worked at a Malaysian university. He also worked with the MyCare charity association in Malaysia, which includes several charitable and humanitarian organizations such as the Al-Aqsa Foundation and i4Syria.

He received his Ph.D degree from the University of Malaya in 2015 and was a senior lecturer at the British Malaysian Institute. His official biography said his research interests included power converters, power quality and renewable energy.

Al- Batsh was also vocal about the Palestinian cause on social media. He had shared many tweets supporting the Great March for Return and also posted about slain Palestinian journalist Yaser Murtaja.