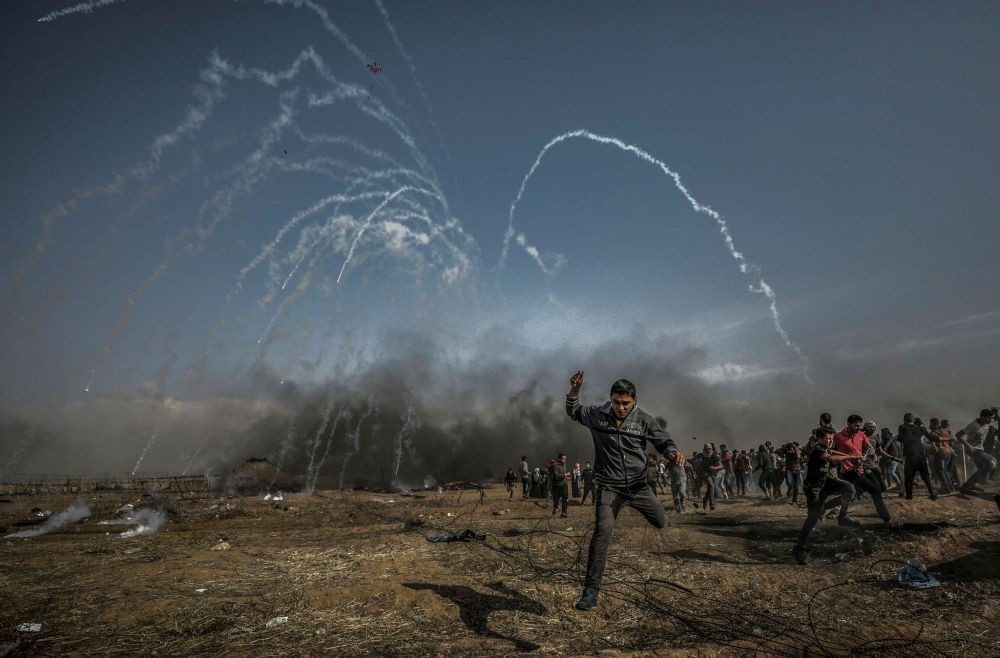 Palestinian protesters run for cover from teargas fired by Israeli soldiers after Friday's protests near the border with Israel, Gaza Strip, April 27.
by Compiled from Wire Services May 01, 2018 12:00 am

Since the border rallies began one month ago, at least 49 Palestinian protesters, including five children, have been killed by cross-border Israeli gunfire, according to the Palestinian Health Ministry. Thousands of others have reportedly been injured, more than 140 seriously, over the same period.

The Israeli military's use of live fire against Palestinian protesters on the Gaza border faced its first legal test before the Supreme Court. Six human rights groups asked the court yesterday to restrict or ban the use of live ammunition.

The Israeli army has refused to disclose its rules of engagement in regards to ongoing Palestinian rallies along the Gaza Strip's eastern border, Israeli daily Haaretz has reported. According to the newspaper's website, the army has refused to answer a petition requesting clarification of its policies in regards to the rallies, which have remained ongoing since March 30.

The army insists that its policy vis-a-vis the use of force along the fraught Gaza-Israel border is confidential saying its rules of engagement in this regard could only be disclosed in a closed court session.

The rights groups say rules of engagement of law enforcement apply, under which officers can only resort to lethal force if their lives are in imminent danger. They say the military's use of lethal force against unarmed protesters is unlawful.

For the last four weeks, Gazans have staged peaceful rallies along the border to demand the "right of return" to their homes in historical Palestine from which they were driven in 1948 to make way for the new state of Israel. The rallies are part of a six-week demonstration that will culminate on May 15, which will mark the 70th anniversary of Israel's establishment, an event Palestinians refer to as Nakba Day, or the Day of Catastrophe, commemorating their displacement 70 years ago.

More than 2 million Palestinians are packed into the narrow coastal enclave. Israel withdrew its troops and settlers from Gaza in 2005. Israel and Egypt imposed the Gaza blockade in 2007 in response to a violent takeover of the territory by Hamas, which had won the Palestinian Parliament elections a year earlier. The blockade has gutted Gaza's economy, driving up unemployment and has left two-thirds of young people without jobs.