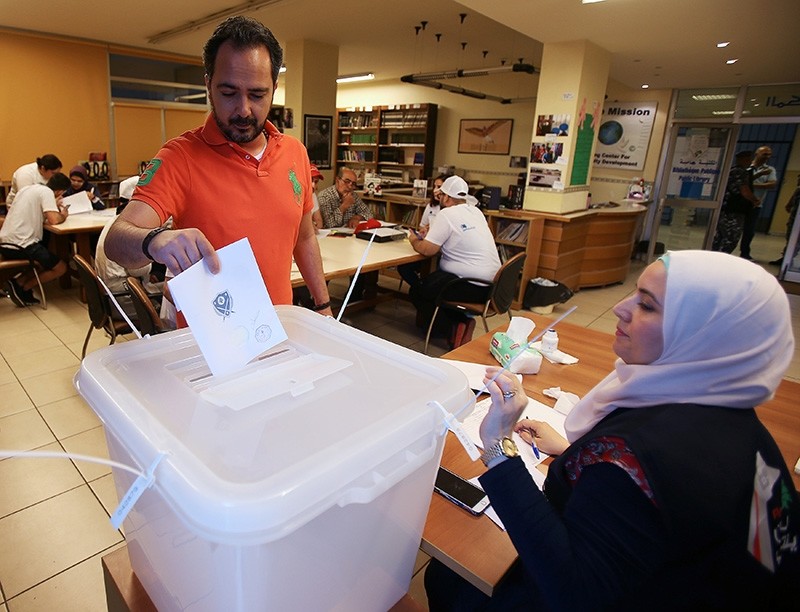 Lebanon's first national elections in nine years were marked by a tepid turnout Sunday, reflecting voter frustration over endemic corruption and a stagnant economy. Politicians urged citizens to vote and security forces struggled to maintain order as fights broke out in and around polling stations.

Less than half of Lebanon's 3.6 million-strong eligible electorate cast votes Sunday, according to a provisional turnout figure of 49.2 percent announced by Interior Minister Nohad Machnouk.

The figure marked a drop from the 54 percent of voters who cast a ballot in 2009, the last time Lebanon elected its parliament.

President Michel Aoun appealed to voters to vote in a televised address an hour before polls closed. "If you want change, you should exercise your right" to vote, he said in a message published on Twitter at the same time.

The main race is between a Western-backed coalition headed by Prime Minister Saad Hariri and the Iranian-backed Hezbollah group. The vote also reflects regional tensions between Sunni powerhouse Saudi Arabia and Iran, which back the rival groups.

The vote is the first since Syria's war broke out in 2011. Hezbollah has sent thousands of fighters to back Bashar Assad's forces, a move that has been harshly criticized by many Lebanese, mainly Sunni Muslims and Christians who see the group as pulling the country into regional conflicts.

The house's term was supposed to expire in 2013, but lawmakers have approved several extensions since then, citing security concerns linked to the spillover from Syria's war. Lebanese who support opposing sides in the war have clashed on a number of occasions, and Sunni extremists have carried out several bombings. The war next door driven more than a million Syrian refugees into Lebanon, straining the country's economy and infrastructure.

Early results were expected to start coming in later Sunday, but official results are not expected to be announced before Monday.

But low turnout — between 30 and 40 percent in Beirut precincts according to the country's National News Agency — betrayed widespread voter apathy for the main political currents governing the country and left open the possibility that outside candidates could win seats in Parliament.

Some 586 candidates, including 86 women, are running for the 128-seat parliament, which is equally divided between Muslims and Christians.

This year's vote is according to a new election law that is based on proportional representation, implemented for the first time since Lebanon's independence in 1943. Voters will choose one list of allied candidates, as well as a preferred candidate from among them.

In the past, the winning list took all the seats in the electoral district.

Hezbollah and its allies are likely to add more seats, while Hariri is likely to lose several. Some of his Sunni supporters see him as being too soft on Hezbollah, and the billionaire businessman has also faced criticism after laying off scores of employees from his companies in Lebanon and Saudi Arabia.

Still, Hariri will most likely be named to form a national unity Cabinet after the vote. Rival sides can hardly govern effectively without each other, and are expected to recreate the unity government that currently exists, which includes Hezbollah.

The vote comes a week after Lebanese living oversees voted in 39 countries around the world for the first time ever.

Turkey's foreign ministry on Sunday welcomed Lebanon's peaceful general elections, which were held for the first time in nine years.

"We wish that the election results will contribute to the social peace, tranquility and stability of Lebanon and a new government embracing the Lebanese people will be formed as soon as possible," the ministry said in a written statement.

The statement said Turkey attaches great importance to the sovereignty, independence, security and stability of Lebanon.

"Turkey will continue to support in all spheres the friendly and brotherly people, and government of Lebanon," the statement added.

Here's a look at the main political parties and key players:

Future Movement: The Future Movement of Prime Minister Saad Hariri was founded in the mid-1990s by his father, the late Prime Minister Rafik Hariri, who was assassinated in a massive bombing in 2005. Hariri, a Sunni politician who also holds Saudi citizenship, currently heads the largest bloc in parliament. He is a critic of the Iranian-backed Hezbollah group, which is nevertheless part of his unity government. Hariri's Future Movement is expected to lose some of its seats during Sunday's elections due to a new electoral law that is likely to fragment the Sunni vote. Some of Hariri's supporters have also shifted their allegiance after the billionaire businessman, who also holds Saudi citizenship, laid off scores of employees in his development company because of Saudi spending cuts.

Free Patriotic Movement: The group founded by President Michel Aoun — a former anti-Syrian Christian opposition leader — has been a close ally of the Hezbollah militant group since the two political factions signed a memorandum of understanding in February 2006. FPM has the second largest bloc in parliament and has candidates running in different regions. The mostly Maronite Christian party enjoys wide support among many Shiites in Lebanon, who are likely to back the group in areas where they have a presence. The FPM is now headed by Aoun's son-in-law, Foreign Minister Gibran Bassil, who is running for a seat.

Hezbollah: The Shiite Muslim Hezbollah guerrilla group, backed by Iran and Syria, was founded in 1982 as a resistance movement to Israeli occupation of parts of Lebanon, and has since grown into Lebanon's most potent military and political force. The group runs an extensive network of charities, schools and clinics and enjoys strong support among Shiite Muslims and some Christians for its record of fighting Israel. Its decision to send its fighters to Syria to shore up Bashar Assad's forces, however, is highly controversial, and may bring a degree of backlash from within the Shiite community. However, it is still expected come out as a winner in these elections, along with its allies. Hezbollah is expected to keep its 12 seats in parliament.

Amal Group: The Shiite political group was founded in the 1970s by Imam Moussa al-Sadr, who went missing in Libya in 1978. The group is a close ally of Hezbollah and is headed by Lebanon's powerful parliament speaker, Nabih Berri. The 80-year-old Berri has held the post for more than 25 years and runs virtually uncontested. Berri is an ally of the Syrian government and is running in a coalition with the militant Hezbollah and other Syrian-backed parties.

Progressive Socialist Party: The main political party of Lebanon's Druze community, which makes up about 5 percent of the total population of Lebanon. The group is headed by leading Druze politician Walid Jumblatt, who is stepping aside in Sunday's election and is backing his eldest son, Taymour, for the seat. The group has several candidates running in coalition with Hariri's Future Movement, the right-wing Christian Lebanese Forces and others.

Lebanese Forces: The right-wing Christian party is the main Christian rival of President Michel Aoun's Free Patriotic Movement and has been one of the harshest critics of Hezbollah. Led by former Christian warlord Samir Geagea, who spent years in jail after the 1975-1990 civil war ended, the group is expected to win more than the eight seats it currently holds.

Civil Society: A record number of civil society activists, women and independents are running in these elections, hoping to ride a wave of popular discontent over Lebanon's myriad troubles, including endemic power cuts, a waste management crisis and soaring debt blamed on corrupt politicians. They face the almost impossible task of competing with sectarian warlords, established parties and wealthy politicians, but hope to at least make a dent in the system.