France, Germany to stick with Iran deal regardless of Trump's decision 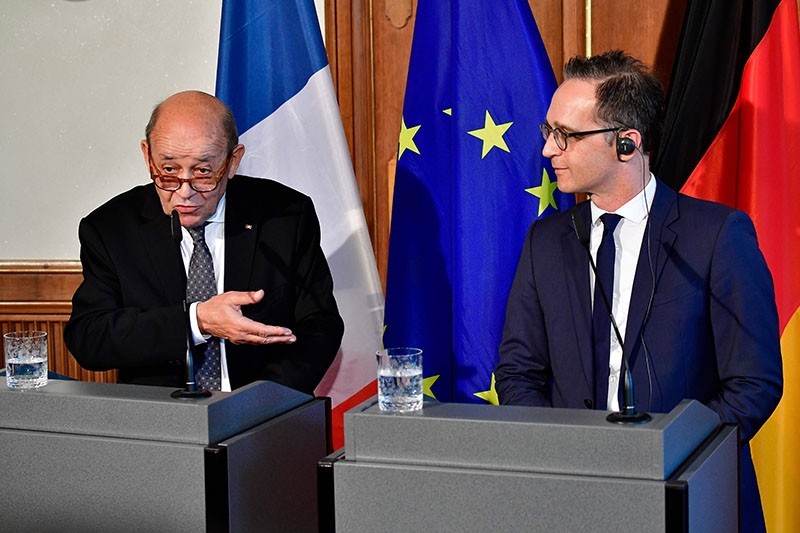 French Foreign Minister Jean-Yves Le Drian (L) and his German counterpart Heiko Maas attend a joint press conference prior a meeting to discuss the EU, common defence policy and international issues on May 7, 2018 in Berlin. (AFP Photo)
by reuters
May 07, 2018 12:00 am

Germany and France on Monday vowed to stand by the 2015 nuclear deal between Iran and world powers even if the United States pulls out, with the German foreign minister saying the world would be less safe without it.

U.S. President Donald Trump has threatened to retreat from the deal by not extending sanctions waivers when they expire on May 12, unless European signatories of the accord fix what he calls its "flaws".

German Foreign Minister Heiko Maas said it was clear that the agreement made the world securer and there was a risk of escalation were it to be cancelled.

"We don't think there is any justifiable reason to pull out of this agreement and we continue to make the case for it to our American friends," Maas said during a joint news conference with visiting French Foreign Minister Jean-Yves Le Drian.

"We'll deal with the (U.S.) decision but like Jean-Yves said, we want to adhere to this agreement," Maas added.

Le Drian said France, Britain and Germany would keep to the 2015 nuclear deal with Iran irrespective of the United States' decision later this week because it is the best way to avoid nuclear proliferation.

"We are determined to save this deal because this accord safeguards against nuclear proliferation and is the right way to stop Iran getting a nuclear weapon," Le Drian said.

France, Germany and Britain have for weeks been campaigning to keep the deal alive and have been negotiating since January with the U.S. to find ways to convince Trump to keep to the accord.

Maas said "good proposals" had been made in recent weeks.

In an effort to keep Washington in the deal, the three EU states have been discussing how to tackle Iran's ballistic missile programme, its nuclear activities beyond 2025 - when key provisions of the deal expire - and its role in the wars in Syria and Yemen.

Iranian President Hassan Rouhani said on Monday the United States would regret any decision to leave the deal and Tehran would fiercely resist U.S. pressure to limit its influence in the Middle East.