US embassy road signs go up in Jerusalem ahead of move 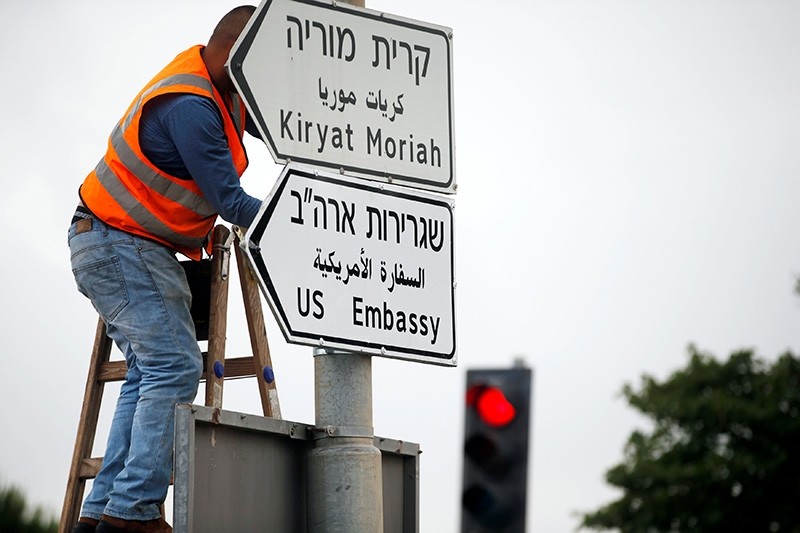 U.S. Embassy road signs went up in Jerusalem on Monday ahead of next week's opening of the mission in accordance with President Donald Trump's recognition of the city as Israel's capital.

On Monday, Jerusalem Mayor Nir Barkat hung the first road sign, in English, Hebrew and Arabic, which points to the interim compound that will be repurposed as the embassy when it is officially relocated from Tel Aviv on May 14.

"This is not a dream, it's reality," the mayor said in a statement. "Jerusalem is the eternal capital of the Jewish people, and the world is beginning to recognize this fact."

According to a state department official, the interim embassy is a building that now operates as part of the U.S. consulate in Jerusalem.

There will be office space for the U.S. ambassador and a few staff, while plans are underway to build new office space. The permanent location of the U.S. embassy is still under consideration, the official said.

Trump announced the move in December, saying he was making good on U.S. legislation and presidential pledges, dating back decades, to back Israel's designation of Jerusalem as its capital.

"By recognizing Jerusalem as the capital of Israel and the seat of its government, we're recognizing reality," U.S. Secretary of State Mike Pompeo said during a visit to Israel last week.

Other world powers have not followed suit, with many condemning the move as a hindrance to regional peace.

The Palestinians want their own state with a capital in East Jerusalem, which Israel captured from Jordanian control in the 1967 war and annexed in a move not recognized abroad.

"This move is not only illegal but will also thwart the achievement of a just and lasting peace between two sovereign and democratic states on the 1967 borders, Israel and Palestine living side by side in peace and security," Palestinian negotiator Saeb Erekat said in a statement.