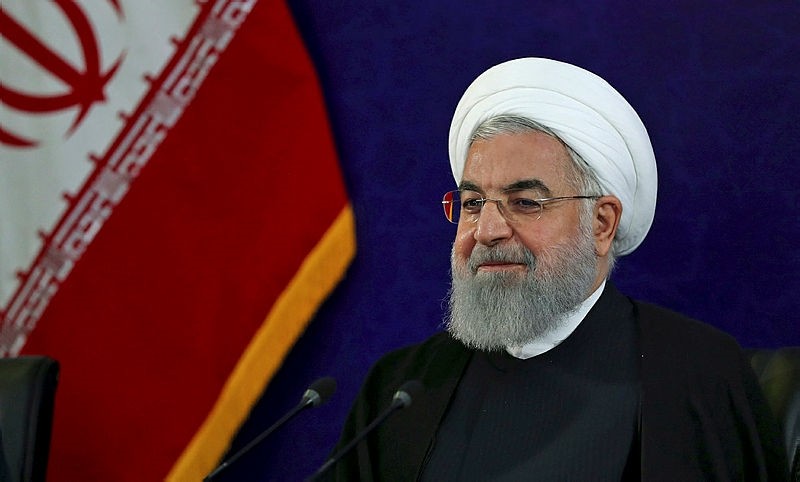 Iranian President Hassan Rouhani said Tehran is ready to resume its nuclear work after holding talks with European, Russian and Chinese parties to the 2015 deal, and asserted that the country will remain in the deal despite Washington's withdrawal.

Speaking live on Iranian state television immediately after the U.S.' announcement, Rouhani called Trump's decision to pull out of the nuclear deal an act of "psychological warfare" against Tehran.

Stressing that the accord remained a "multilateral" one, and not just with the U.S., Rouhani said he'd be sending Iranian Foreign Minister Mohammad Javad Zarif to the countries still in the deal — China, France, Germany, Russia and the United Kingdom.

Iran hopes the European Union will pass laws to protect European firms from any potential U.S. sanctions. EU officials have suggested they'll do what they can to salvage the agreement.

Still, Rouhani made a point of stressing that Iran, at any time, could resume its nuclear program.

"So if necessary, we can begin our industrial enrichment without any limitations," the Iranian leader said. "Until implementation of this decision, we will wait for some weeks and will talk with our friends and allies and other signatories of the nuclear deal, who signed it and who will remain loyal to it. Everything depends on our national interests."

"I have ordered Iran's atomic organization that whenever it is needed, we will start enriching uranium more than before," he said, adding that Iran would start this "in the next weeks," as there was a "short time" to negotiate.

Bucking pressure from the U.S.' closest European allies, President Donald Trump withdrew the U.S. Tuesday from its participation in the landmark nuclear agreement world powers struck with Iran in 2015.

Trump opted not to extend sanctions relief on Iran ahead of a May 12 deadline, vowing instead to re-impose nuclear-related economic penalties.

The 2015 nuclear agreement placed unprecedented restrictions on Iran's nuclear program in exchange for billions of dollars in relief from international sanctions, but Trump has consistently railed against it since he began his bid for America's highest office, repeatedly claiming it is the "worst deal" he has ever seen.

All of the U.S.' negotiating partners -- the U.K., France, Germany, Russia, China and the EU -- had agreed that maintaining the accord was the best way to reign in Iran's program.