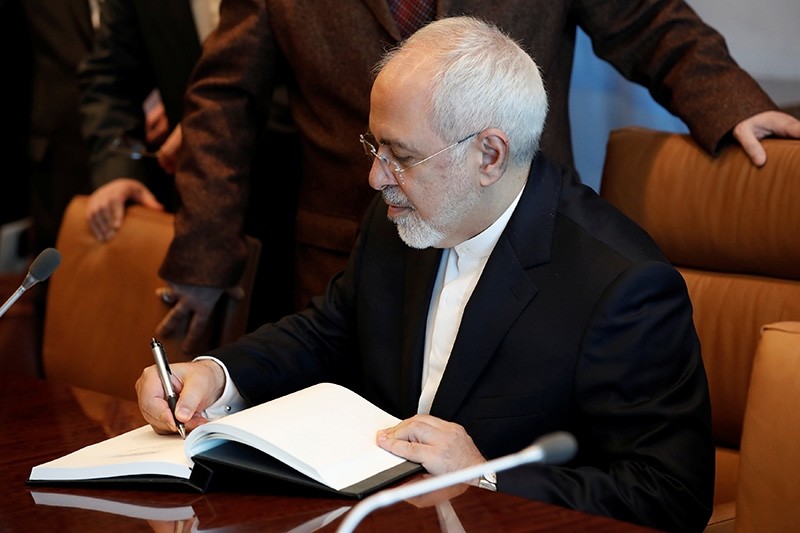 Iran's foreign minister was due to leave Saturday for a whirlwind diplomatic tour as world leaders scramble to salvage something from the wreckage of a landmark nuclear deal in the wake of Washington's withdrawal.

He will visit Beijing, Moscow and Brussels, a spokesman said, holding meetings with all of the remaining parties to the 2015 agreement.

Before leaving, Zarif published a government statement on his Twitter page, slamming the "extremist administration" of U.S. President Donald Trump for abandoning "an accord recognized as a victory of diplomacy by the international community".

It reiterated that Iran was preparing to resume "industrial-scale" uranium enrichment "without any restrictions" unless Europe provided solid guarantees that it could maintain trade ties despite renewed U.S. sanctions.

Zarif is due to leave for Beijing on Saturday and will later travel to Russia. He will then go to Brussels to meet counterparts from Germany, Britain and France "about the fate of the nuclear deal", Iranian state television said.

"Iran has asked the European Union and particularly Germany, France and Britain to announce as soon as possible their stand on how Iran's interests can be fulfilled and guaranteed under the nuclear agreement after America's withdrawal," the TV report said.

Europe's largest economies lobbied to protect their companies' investments in Iran on Friday, seeking to keep the nuclear deal with Tehran alive after Washington pulled out and threatened to impose sanctions on European companies.

Germany and France have significant trade links with Iran and remain committed to the nuclear agreement, as does Britain, and the three countries' foreign ministers plan to meet on Tuesday to discuss it.

That is part of a flurry of diplomatic activity following Trump's unilateral withdrawal from what he called "a horrible, one-sided deal", a move accompanied by the threat of penalties against any foreign firms doing business in Iran.

Zarif's delicate diplomatic mission was complicated by reports of clashes between Iranian and Israeli forces in Syria on Thursday.

The Syrian Observatory of Human Rights said Saturday that 11 Iranians were among the pro-regime fighters killed in strikes by Israel, which has vowed to prevent Iran gaining a military foothold in neighboring Syria.

Tehran, which has sought to avoid an escalation in regional conflict that could alienate its European partners, has not commented on whether its forces were hit.

Israel and its allies have blamed the Iranian Revolutionary Guards for initiating Thursday's exchange by launching missiles into the occupied Golan Heights.

The White House backed Israel's claims, accusing Iran of "reckless actions" that posed a "severe threat" to stability in the Middle East.

Iran denies that version of events, saying the Israeli strikes were launched on "invented pretexts".

Meanwhile, European diplomats in Tehran fumed that Trump's decision to withdraw from the nuclear deal could undermine years of patient work to restore commercial and diplomatic ties with the Islamic Republic.

"Since the signing of the JCPOA (nuclear deal), we have gone from an atmosphere like a gold rush, to one of utter depression," said a Western trade diplomat on condition of anonymity.

"We are waiting now for how the decision-makers in the European Union will react. If the EU leans towards accommodating the U.S., all the progress we have made since 2015 will be lost."

But she emphasized that many of the problems began long before Trump's move last Tuesday.

"Decisions on the Iranian side took longer than expected, international banks were reluctant to work with Iran and the recent decline in the value of (Iran's currency) made international business even more difficult," she said.

Iranian hardliners -- who have long opposed President Hassan Rouhani's moves to improve ties with the West -- are already mobilizing against the efforts to save the nuclear deal.

A photo on the official Instagram site of Supreme Leader Ayatollah Ali Khamenei showed him reading a Farsi translation of Michael Wolff's scabrous account of the Trump White House, "The Fire and the Fury," quickly picking up more than 100,000 likes.

Khamenei said this week he is highly doubtful that Europe will provide the "real guarantees" needed for Iran to stay in the nuclear deal.

But analysts said Iran was determined to maintain the moral high ground in the coming weeks.

"For the first time, Iran has the chance to show the world they are not the rogue nation they are always presented as, that they negotiated in good faith and keep to their commitments," said Karim Emile Bitar of the Institute for International and Strategic Studies in Paris.

The challenge for Rouhani is to maintain his diplomatic efforts in the face of mounting challenges at home, where Iranians were already suffering high unemployment and inflation before Trump's decision.

Many say sanctions allow the government to blame outsiders for its own bad decisions.

The Western trade diplomat gave the example of Iran's recent restrictions on transferring funds to the EU -- an effort to control the rapid slide of the rial -- that caused huge problems for importers.

"It's really annoying that the Iranian government is never blamed for the really bad decisions they have taken lately concerning business, and only the sanctions are blamed," she said.