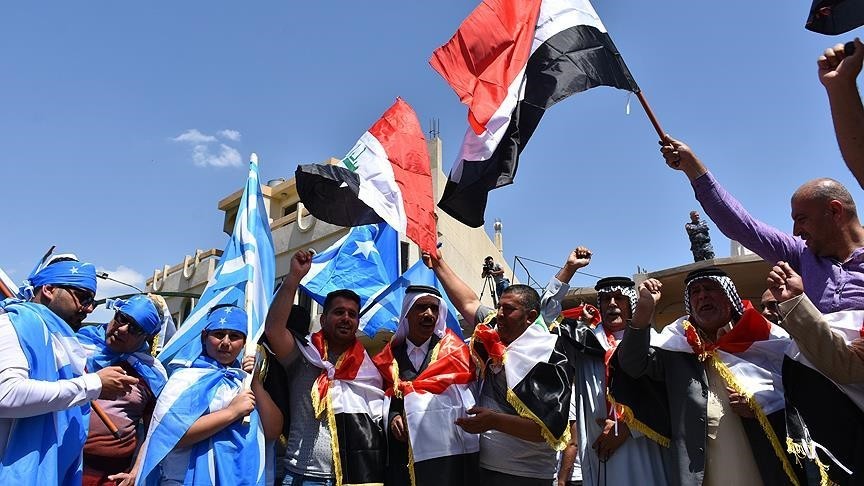 Iraqi Turkmens and several Arab and Kurd groups in Kirkuk on Sunday protested alleged fraud in the country's first parliamentary elections since the defeat of Daesh.

The protesters claimed their votes were illegally changed in favor of Kurdish parties by local officials at polling stations.

"Arabs and even some Kurds have joined the protests. We are standing altogether against that shady election," a Kirkuk resident speaking to Anadolu Agency, Ali Berberoğlu said.

"We want votes to be counted manually, not electronically. Otherwise, those demonstrations won't stop," Berbedoğlu added.

Another resident, Murat Ahmet also said that the results should be considered null and void.

"We will not allow Kirkuk to come under a one-sided administration again. We will continue our protests."

The governor of Kirkuk declared a curfew the previous day and ordered a manual recount of votes there in the national election, saying an electronic counting system had produced an "illogical" result.

Rakan al-Jubouri, governor of the northern oil-rich region, announced a curfew from midnight until 6 a.m. to prevent any ethnic or sectarian tension between its Kurdish, Arab and ethnic Turkmen communities.

Al-Jubouri did not elaborate in his statement on the problem with the vote-counting system.

In October, Iraqi forces backed by Shi'ite militias dislodged Kurdish Peshmerga fighters who had taken control of Kirkuk city in 2014, preventing its capture by Daesh terrorists who had overrun Iraqi army positions in northern and western Iraq.

The return of the Iraqi army to Kirkuk was greeted with relief by the Arab and Turkmen populations there.

Saturday's elections are the first in Iraq since the defeat of Daesh last year by Iraqi forces backed by a U.S.-led coalition.