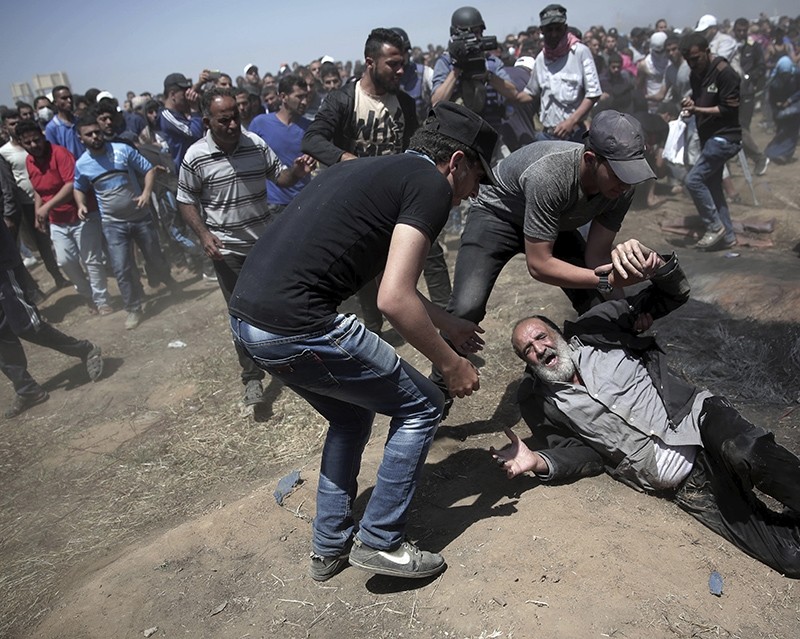 An elderly Palestinian man falls on the ground after being shot by Israeli troops during a deadly protest at the Gaza Strip's border with Israel, east of Khan Younis, Gaza Strip, Monday, May 14, 2018. (AP Photo)
by Daily Sabah with Agencies May 14, 2018 12:00 am

Gaza experienced its bloodiest massacre since 2014 on Monday, as the Israeli military killed at least 52 Palestinians and wounded more than 1,700 others as protesters streamed to the frontier for the climax of a six-week demonstration as the United States prepared to open its embassy in Jerusalem.

The death toll made it the deadliest day in the Israeli-Palestinian conflict since the 2014 Gaza war.

The victims, including a 14-year-old, were shot dead as Israeli snipers opened fire amid clashes at five points along the Gaza border hours before the opening of the embassy.

More than 1,700 Palestinians were wounded in the clashes, the health ministry in Gaza said, with the Palestinian Journalists' Syndicate saying eight journalists were among them.

The Israeli army said that more than 35,000 people were involved in the protests and clashes.

Israeli warplanes also struck a Hamas base close to the border, the army said, saying forces had come under fire.

The army killed three more Palestinians, who it said were trying to plant an explosive device.

The Palestinian Authority government based in Ramallah, in the occupied West Bank, accused Israel of carrying out a "terrible massacre."

Bilal Fasayfes, 31, was getting on a free bus to the border with his wife and two children in the southern Gaza city of Khan Yunis.

"If half the people die we won't care," he said. "We will keep going so the other half can live with dignity."

East of Gaza City, Umm Saab Habib, 60, said she was taking part "to tell Trump to remove the embassy from Jerusalem and we are returning to Jerusalem."

Demonstrators are also calling for Palestinian refugees who fled or were expelled during the 1948 war surrounding Israel's creation to be allowed to return to their homes now inside Israel.

More than 91 Palestinians have been killed by Israeli fire since protests and clashes began along the Gaza border on March 30.

No Israelis have been wounded and the military has faced criticism over the use of live fire.

Musab Abu Laila, 29, was also killed later in the day near Jabalia suburb.

At Shifa Hospital, where doctors say they are running low on crucial supplies and being forced to discharge patients early to make space for the next wave, a large tent was erected in front of the emergency room.

Faris Abu Hajaras, 50, said his family was from Jaffa, now within Israel, but he had never been there. He is a builder but said Israel's blockade of Gaza meant there was no work.

"We will stay peaceful with our hands like this," he said, lifting them to the sky. "But death comes from God."