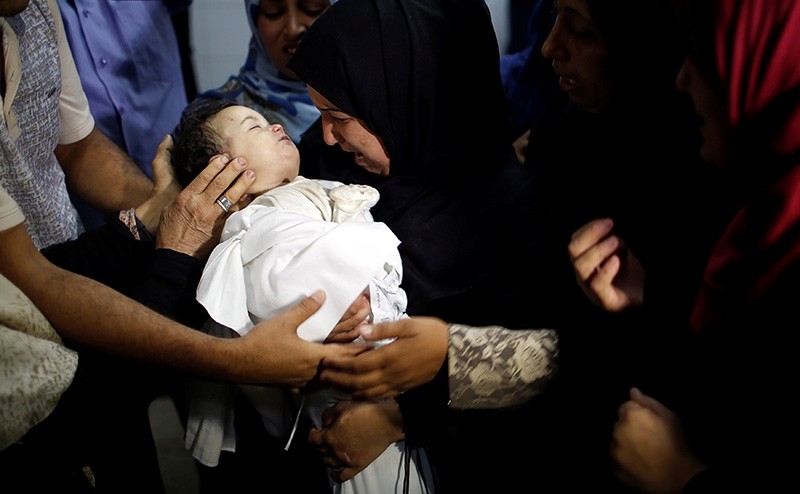 The mother of 8-month-old Palestinian infant Laila al-Ghandour, who died after inhaling tear gas during a protest at the Israel-Gaza border, mourns as she carries her body during her funeral in Gaza City May 15, 2018. (Reuters Photo)
by May 15, 2018 12:00 am

Israeli forces killed 61 Palestinians and injured 2,770 during protests along the Gaza border on Monday and Tuesday against the U.S. embassy opening in Jerusalem in the conflict's bloodiest day in years.

It comes a day after the United States transferred its Israel embassy from Tel Aviv to the disputed city of Jerusalem in a move that infuriated the Palestinians and was widely condemned.

Most of the 61 Gazans who died Monday were shot by Israeli snipers, Gaza's health ministry said. 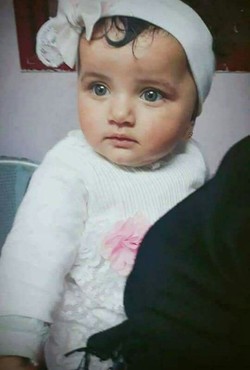 The toll included a baby who died from tear gas inhalation along with eight children under the age of 16, the ministry said.

At least 2,700 others were wounded in the bloodiest day in the Israeli-Palestinian conflict since the 2014 Gaza war.

Hamas's armed wing and other Palestinian groups "will not prolong their silence over the crimes of the occupation", he said.

In the West Bank, Palestinian president Mahmoud Abbas declared a general strike on Tuesday after accusing Israel of "massacres".

On Monday, tens of thousands had gathered near the border in protest while smaller numbers of stone-throwing Palestinians approached the fence and sought to break through, with Israeli snipers positioned on the other side.

The death toll led to strong condemnation from rights groups and concern from a range of countries.

But the United States blocked the adoption of a UN Security Council statement that would have called for an independent probe into the violence, diplomats at the United Nations said.

Despite the violence, the embassy inauguration went on as planned in Jerusalem, attended by a Washington delegation that included U.S. President Donald Trump's daughter Ivanka and her husband Jared Kushner, both White House aides.

Trump addressed the gathering by video.

"Our greatest hope is for peace," he said, despite the Palestinian anger the move has provoked.

Israel's military said 40,000 Palestinians had taken part in the protests and clashes.

It said its aircraft had targeted 11 Hamas sites and tanks fired at "two terror posts belonging to Hamas", accusing the Palestinian movement of opening fire towards Israeli forces.

Israel says its action is necessary to stop infiltrations of the border fence and claims that Hamas, which runs the blockaded Gaza Strip, uses the protests as cover to carry out violence.

The White House also blamed Hamas for the violence.

French President Emmanuel Macron condemned the "violence of the Israeli armed forces against the protesters" as several countries urged restraint.

"We continue to implore Israel to show greater restraint," he said.

Turkey also said it was recalling its ambassadors to the United States and Israel "for consultations," while South Africa recalled its ambassador to Israel "until further notice".

At least 113 Palestinians have been killed in a campaign of protests along the Gaza border since March 30, the vast majority by Israeli snipers during clashes.

Only one Israeli soldier has been reported wounded during that time.

On Monday, the army said "many rioters" tried to breach the border fence and "approximately 10 explosive devices and several firebombs were used to target the security fence and (Israeli) troops". It said shots were also fired at the soldiers.

Israel considers the entire city its capital, while the Palestinians see East Jerusalem as the capital of their future state.

International consensus has been that the city's status must be negotiated between the two sides, but Trump broke with that to global outrage.

He has argued that it helps make peace possible by taking Jerusalem "off the table", but many have noted he has not announced any concessions in return from Israel.

Beyond the disputed nature of Jerusalem, the date of the embassy move was also of key importance. May 14 marks the 70th anniversary of the founding of Israel.