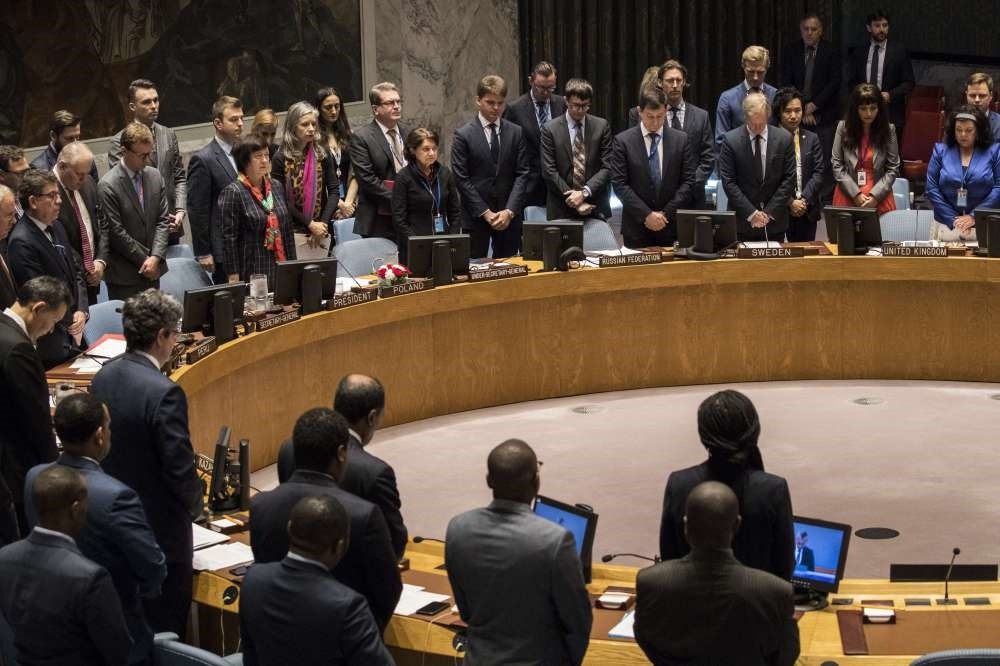 Members of the United Nations Security Council observe a moment of silence, New York City, May 15.
by Daily Sabah with Wires May 16, 2018 12:00 am

As Israel has faced a growing backlash and new charges of using excessive force against Palestinians, U.S. Ambassador to the United Nations Nikki Haley praised Israel for showing restraint as Palestinian resistance group Hamas "has been inciting violence for years, long before the United States decided to move our embassy" to Jerusalem. Addressing a U.N. Security Council meeting on recent deadly violence in Gaza, Haley said: "No country in this chamber would act with more restraint than Israel has."

In the face of global condemnation over Israeli violence against unarmed Palestinian protesters, Israeli Ambassador Danny Danon called on the council to condemn Hamas. He earlier stated that the council needed to speak out against Hamas. "Every casualty on the border is a victim of Hamas' war crimes, every death is a result of Hamas' terror activity, and these casualties are solely Hamas' responsibility," Danon said in a statement.

The U.N. Security Council met yesterday to discuss violence along the border between Israel and the Gaza Strip, beginning with a moment of silence for at least 61 Palestinians killed by Israeli forces in the bloodiest day there since a 2014 war.

Kuwait intends to circulate a draft U.N. resolution to protect Palestinian civilians, its ambassador to the United Nations said yesterday, following the deadliest day of violence in the Gaza Strip since 2014.

Mansour al-Otaibi said the draft would be circulated "most probably tomorrow" and would be designed to protect the Palestinians and "provide international protection for civilians." He spoke moments before the U.N. Security Council opened an emergency meeting to discuss the Israeli violence with a moment of silence. The draft statement demands that all countries comply with a decades-old Security Council resolution that called on them not to have embassies in contested Jerusalem.

In jarring contrast to the Gaza bloodshed, the U.S. held a festive inauguration ceremony for a new U.S. Embassy in contested Jerusalem at the same time Monday, just several dozen miles (kilometers) away. The juxtaposition of violence on the Gaza border and festivities attended by a Trump administration delegation — captured on split screens in TV broadcasts around the world — briefly drew attention to the plight of Gaza and its 2 million people. The relocation of the embassy from Tel Aviv, condemned by Palestinians as blatantly pro-Israel, further dimmed prospects of what President Donald Trump had once touted as plans to negotiate the "deal of the century." The Palestinians seek Israeli-annexed east Jerusalem as a capital.