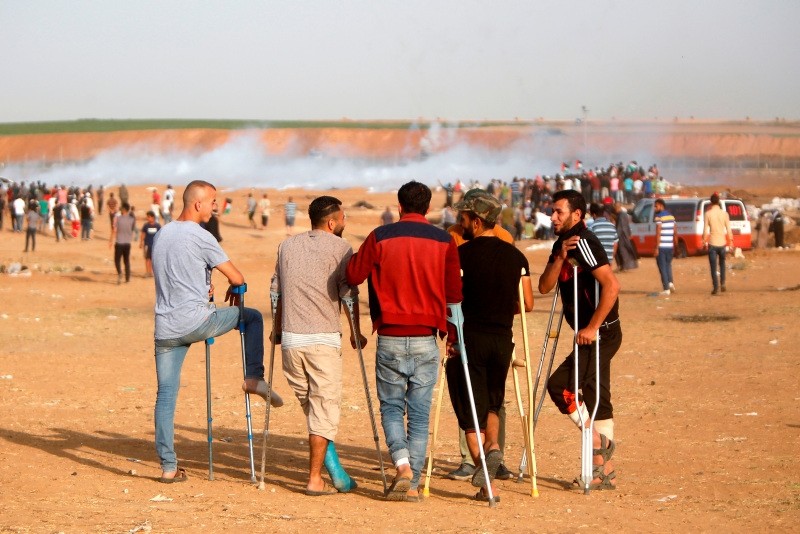 Injured Palestinian men talk during clashes with Israeli forces along the border with the Gaza strip east of Jabalia on May 18, 2018. (AFP Photo)
by Daily Sabah with AP May 18, 2018 12:00 am

Palestinians resumed their protests at Gaza's border with Israel on Friday as a U.N. human rights body criticized Israel for the "disproportionate and indiscriminate use of force" that killed at least 59 Palestinians earlier this week.

Friday's Gaza protests — the eighth in as many weeks — drew Israeli gunfire and tear gas, with at least 23 people wounded, the Gaza Health Ministry said. Israel's military said they were transferred to Jordan for medical treatment.

Egypt, meanwhile, said it has opened its Rafah border crossing with Gaza for the entire Muslim holy month of Ramadan in an apparent effort to ease the crisis in the impoverished, densely populated territory.

Organizers of the protests say they are meant in large part to break the blockade imposed by Israel and Egypt and to pressure Israel to ease its restrictions. Since the demonstrations began March 30, more than 110 Palestinians have been killed and more than 2,500 wounded by live fire, according to the Health Ministry. Palestinian officials say most of the casualties have been unarmed protesters. No casualties from Israeli side.

The weekly protests peaked Monday when about 40,000 Gazans descended on the border. Israeli snipers opened fire, targeting indiscriminately and killing 59 Palestinians and wounding hundreds in the deadliest day of cross-border violence in Gaza since a 2014 war.

In Geneva, the U.N. Human Rights Council voted to set up a commission of inquiry to look into the Israeli actions.

Meeting in a special session, the council voted 29-2 with 14 abstentions to back a resolution that also condemned "the disproportionate and indiscriminate use of force by the Israeli occupying forces against Palestinian civilians."

The "independent, international commission of inquiry" mandated by the council will be asked to produce a final report in March 2019.

"There is little evidence of any attempt to minimize casualties on Monday," he said.

U.S. Ambassador to the United Nations Nikki Haley said in a statement that "the U.N.'s so-called Human Rights Council has decided to launch an investigation into a democratic country's legitimate defense of its own border against terrorist attacks. It is another shameful day for human rights."

Meanwhile, in Istanbul the Organization of Islamic Cooperation (OIC) held a summit over the killing of Gaza protesters. Earlier on the same day, a huge rally was held under the leadership of President Recep Tayyip Erdoğan against the Israeli violence.

Egypt and Israel have imposed a blockade on the Gaza Strip since 2007, heavily restricting movement in and out of the densely populated and impoverished territory.

Over the years, Egypt has opened the crossing for a few days every two to three months, the only way for most Gazans to reach the outside world.

Hamas leader Ismail Haniyeh said the opening was the result of talks Sunday in Cairo with Egyptian officials.

"We are witnessing the outcome through steps Egypt has taken, and we hope they continue, develop and increase," he said at a Friday prayer sermon in Gaza City. But he added that the weekly protests will continue.