Al-Sadr's bloc a surprise to both Iran, United States 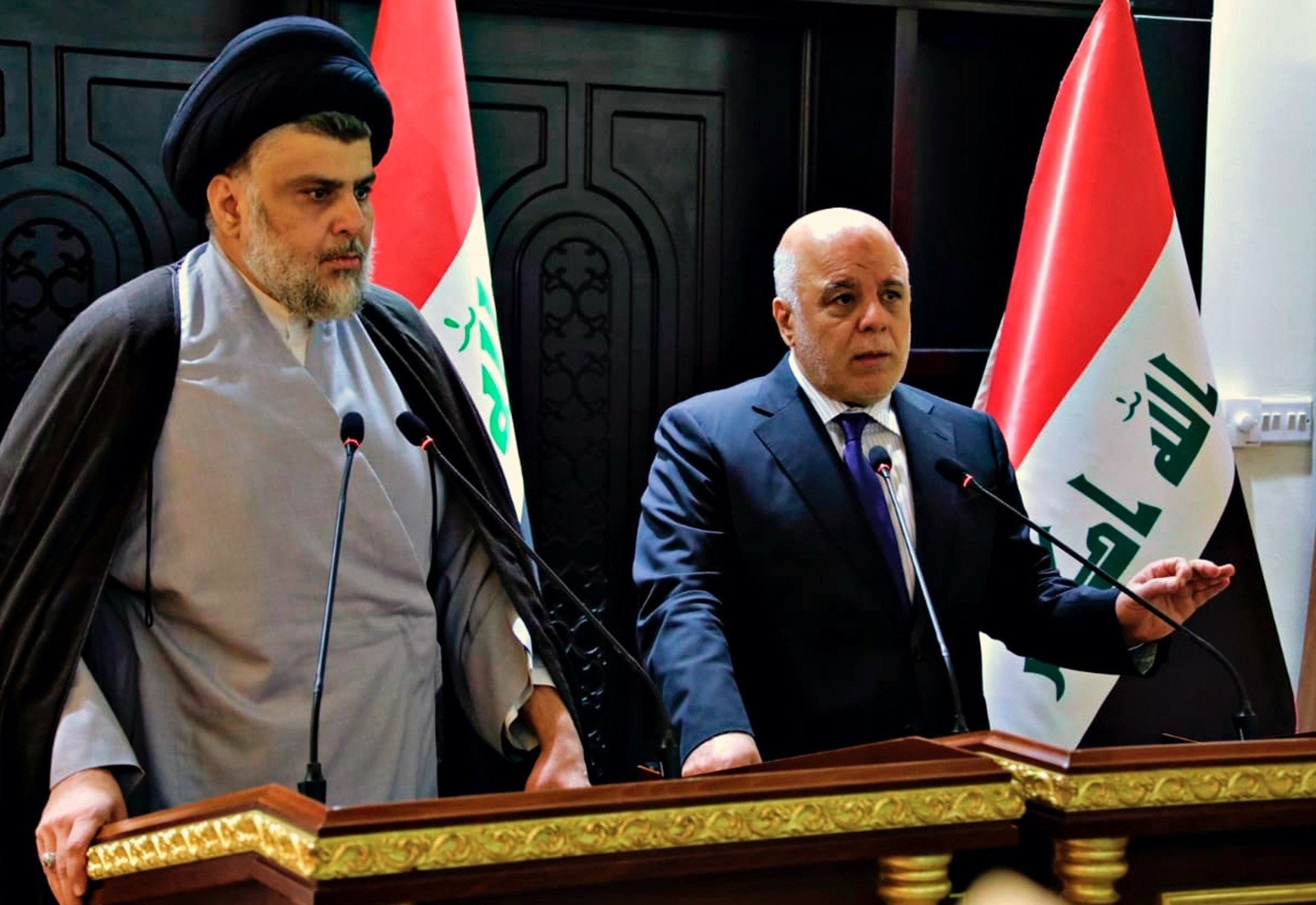 Shiite cleric Muqtada al-Sadr (L) and Iraqi Prime Minister Haider al-Abadi hold a press conference in the heavily fortified Green Zone in Baghdad, May 20.
by Daily Sabah with Wires
May 21, 2018 12:00 am

The results of the Iraqi elections were declared and accordingly the bloc of the Shiite cleric Muqtada al-Sadr, who has considered a foe by both Iran and the U.S. has won the majority

Since Daesh has captured several cities in the country and launched an all-out war against the Iraqi people and Iraqi state, the country's politics had become much more fragile. In addition to the threats posed by the Daesh, the desire of the Kurdish administration for independence has escalated tensions. At the same time, certain Shiite groups declared their displeasure with the government, led by Haidar al-Abadi who ascended to the post after former Prime Minister Nouri al-Maliki was accused of following deliberately sectarian policies. Iraq had elections amid several problems and conflicts. The result was a bit surprising as the Shiite cleric Muqtada al-Sadr won the elections.

Al-Sadr, an interesting and a charismatic figure in Iraqi politics, is known with his anti-Iran stance. Meanwhile, he is a strong U.S. opponent as he and his movement fought against the U.S. forces in the first years of the invasion of Iraq. Al-Sadr is said to be more tolerant towards Sunnis. His meetings with certain leaders and representatives of the Gulf and allegedly positive stance towards Turkey bring about the hope of whether he would be successful to overcome sectarianism in Iraq.

Because Al-Sadr did not run in the elections, he has no chance to become prime minister. However, his bloc's victory (Revolutionary Reform Alliance)likely to increase his power and strengthen his position in politics. "The Victory Alliance, headed by incumbent Prime Minister Haider al-Abadi, trailed in third place with 42 seats, behind the Al-Fatih bloc, which won 47 seats. Al-Fatih is led by Hadi al-Amiri, who has close ties with Iran and heads an umbrella group of paramilitaries that played a key role in defeating Daesh," Reuters reported. Al-Fatih bloc is known for its close ties to Iran.

It is remarkable that both Iran and the U.S. will have to deal with the Shiite cleric's bloc. When it was announced that al-Sadr's bloc was the winner, several news agencies published similar reports, asking how Iran, the U.S. and the government will get along. "The nationalist cleric's success could be a setback for Iran, which has steadily increased its influence in Iraq – its most important ally in the Middle East since a U.S.-led invasion toppled Saddam Hussein in 2003. Sadr was able to capitalize on growing resentment over Tehran-backed governments who have failed to improve basic services and build hospitals and schools in a country devastated by the war against Daesh and by sectarian bloodshed. It was a remarkable comeback for Sadr, who for years had been sidelined by Iranian-backed rivals and was regarded by U.S. and Iraqi officials as an unpredictable maverick.

Sadr became a symbol of resistance to foreign occupation when he led two violent uprisings against U.S. troops, prompting the Pentagon to call his Mehdi army militia the biggest threat to Iraq's security," the Reuters' report said. Similarly, the Associated Press (AP) wrote "Can the U.S. really set aside the past and embrace a cleric whose Mahdi Army killed U.S. and Iraqi troops and was accused of kidnapping, torturing and killing Sunni Iraqis? The tentative answer is yes. U.S. officials involved in Iraq policy said President Donald Trump's administration was cautiously optimistic that al-Sadr, having evolved over the years into a populist, corruption-fighting leader, could herald the formation of a broad-based and inclusive government that tolerates a continuing American presence in the country." Apparently, both al-Sadr's bloc and the U.S. will agree on certain issues. Their primary concern will be to totally erase Daesh from the Iraqi territories.