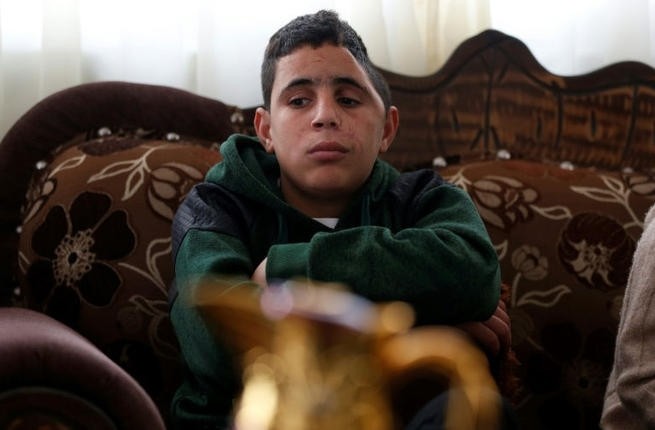 Muhammad al-Tamimi, cousin of Palestinian resistance icon Ahed al-Tamimi, was detained by the Israeli forces in an overnight raid of his home north of Ramallah.

The 15-year-old Palestinian, who suffers from a severe head injury after being struck by a rubber-coated Israeli bullet, was taken to a detention center in the occupied West Bank and was later released after Israeli authorities ruled that his health condition does not permit him to stay in detention, an activist told Palestinian News and Information Agency.

The reason behind his detention was not made public.

Al-Tamimi was shot in the face by an Israeli soldier while playing near his home in Nabi Saleh village on Dec. 28.

He was sent to a hospital near Ramallah for two weeks where he underwent extensive surgery, during which doctors had to remove much of his scalp.

The Israeli military claimed that Muhammad sustained his head injury after falling off a bike, however, the medical records and family statements confirmed that a bullet entered the boy's jaw and exited from his head.

The teen's arrest and full-throttle prosecution by Israel have garnered international attention. The incident has also touched on broader issues, such as Israel's detention of Palestinian minors — currently 356, according to Israeli figures — and the debate on what constitutes legitimate resistance to Israel's rule over millions of Palestinians.