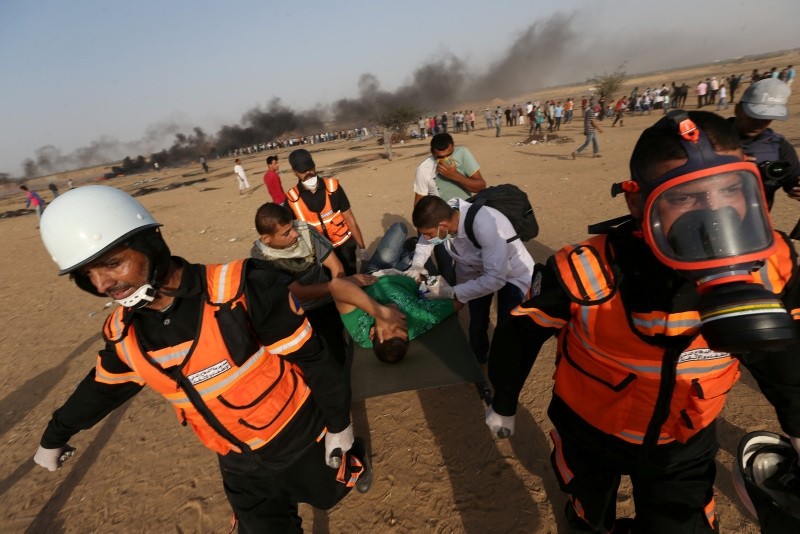 A wounded demonstrator is evacuated during a protest where Palestinians demand the right to return to their homeland, at the Israel-Gaza border, in the southern Gaza Strip May 18, 2018. (Reuters Photo)
by Compiled from Wire Services May 21, 2018 12:00 am

Palestine will lodge a complaint with the International Criminal Court (ICC) against Israel on Tuesday over its settlement building and "war crimes" in the blockaded Gaza Strip.

Palestinian Foreign Minister Riyad al-Malki will submit the complaint to the ICC's chief prosecutor on Tuesday, the Palestinian embassy in The Hague said in a statement on Monday.

There was no comment from Israel on the Palestinian move.

Maliki will meet with prosecutor Fatou Bensouda on Tuesday morning just over a week after 62 Palestinians were killed by Israeli fire as they protested the U.S. decision to move its embassy from Tel Aviv to the disputed city of Jerusalem.

Afterwards, Maliki will hold a press conference outside the court. He will also meet later Tuesday with Dutch counterpart Stef Blok.

Bensouda vowed last week that she was watching the unrest in Gaza closely and would "take any action warranted" to prosecute crimes.

"My staff is vigilantly following developments on the ground and recording any alleged crime that could fall within" the tribunal's jurisdiction, she warned in a statement to AFP.

"The violence must stop," she insisted, urging "all those concerned to refrain from further escalating this situation and the Israel Defence Forces to avoid excessive use of force."

Since March 30, more than 110 Palestinians have been killed and thousands injured by Israeli gunfire during anti-occupation rallies along border of the Gaza Strip.

In late December, 2014, Palestinian President Mahmoud Abbas signed the Rome convention and appendixes related to the ICC, which accepted the Palestinian request to become one of its members in April 2015.

The Palestinians asked the prosecutor to investigate alleged crimes committed in the Palestinian territories in the Gaza war the previous year, and Bensouda opened her inquiry just a few days later.

The preliminary examination which comes ahead of a full-blown investigation continues.