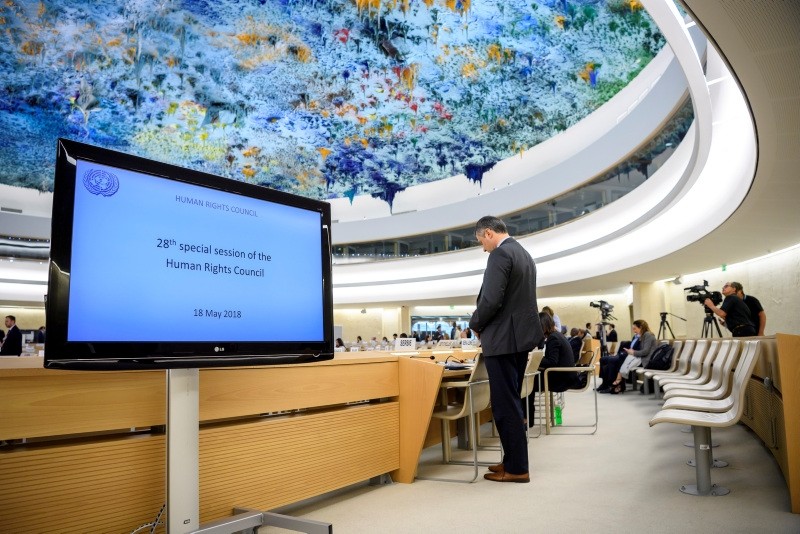 A view of the panel during the Human Rights Council that holds its 28th Special Session at the European headquarters of the United Nations in Geneva, Switzerland, 18 May 2018. (EPA Photo)
by French Press Agency - AFP
May 21, 2018 12:00 am

Israel has summoned the ambassadors of Spain, Slovenia and Belgium over their votes at a U.N. body calling for an international probe of the deadly shootings of dozens of Palestinians on the Gaza border, the foreign ministry said Monday.

The Spanish and Slovenian ambassadors were called in on Monday, while the Belgian envoy was to be received on Tuesday, the ministry said in a statement.

The U.N. Human Rights Council voted Friday to send a team of international war crimes investigators to probe the deadly shootings. The three European countries were among 29 that voted in favor.

Only two of the council's 47 members, the United States and Australia, voted against the resolution, while 14 abstained, including Britain, Switzerland and Germany.

The text said the team should "investigate all alleged violations and abuses... in the context of the military assaults on large scale civilian protests that began on 30 March 2018, ... including those that may amount to war crimes."

Palestinians began protesting on the Gaza-Israel border on March 30 for the right to return to the homes their families fled or were expelled from in 1948, during the war surrounding the creation of Israel.

A total of at least 118 Palestinians have been killed by Israeli fire since then, according to authorities in Gaza, which is run by the Hamas movement.

No Israelis have been killed in that timeframe.

The protests peaked on May 14, the day the United States moved its embassy in Israel from Tel Aviv to Jerusalem. Tens of thousands protested on the Gaza border that day, with 62 killed by Israeli gunfire.

Israel says its actions are necessary to defend the border and stop mass infiltrations from the territory.