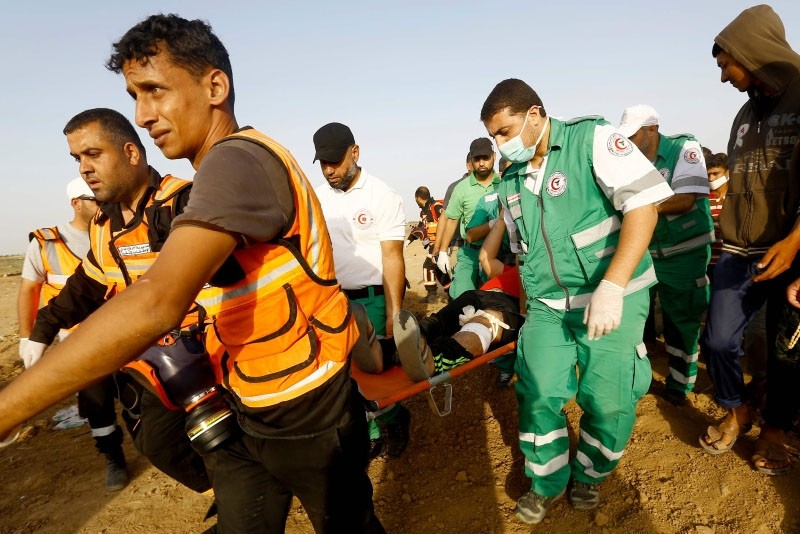 Palestinians carry an injured protester during clashes with Israeli forces along the border with the Gaza strip east of Jabalia on May 18, 2018. (AFP Photo)
by Anadolu Agency
May 22, 2018 12:00 am

Speaking at a press conference in Gaza City, Krahenbuhl described the nature of injuries sustained by Palestinian protesters as "shocking".

He added that the number of protesters injured since Palestinians began holding rallies near the Gaza-Israel fence on Mar. 30 now exceeded the number of those injured during Israel's destructive 2014 military onslaught on the coastal enclave.

Of the 13,000 Palestinians injured since the Gaza rallies began on Mar. 30, Krahenbuhl said, roughly 3,500 had been struck by live ammunition.

According to the UNRWA chief, the large number of casualties -- and the severe nature of many injuries -- had pushed Gaza's health sector to the brink of collapse.

On May 14, at least 65 unarmed Palestinian demonstrators in Gaza were killed -- and thousands more injured -- by intense Israeli army gunfire.

The protests had coincided with the 70th anniversary of Israel's establishment in 1948 -- an event Palestinians refer to as the "The Catastrophe" -- and the relocation of the U.S. Embassy to Jerusalem, which took place the same day.