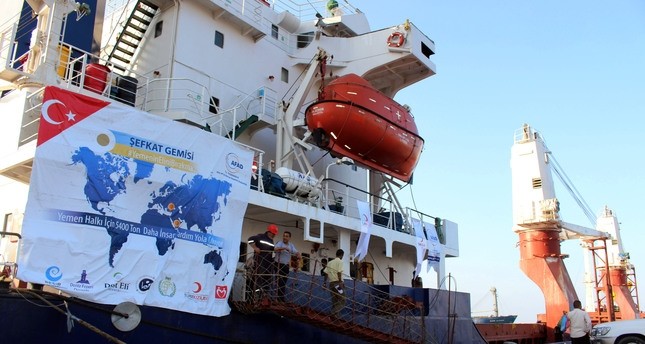 "The United States is alarmed by the Houthi missile strike against a Turkish cargo ship 70 miles off the coast of Yemen that was attempting to deliver 50,000 metric tons of wheat to Yemen's Saleef port near Hudaydah," the White House said in a statement.

Turkey's Foreign Ministry said there were no causalities in the attack.

In a written statement, Turkish Foreign Ministry spokesman Hami Aksoy said the cargo ship Ince Inebolu was attacked by a missile along the coast of Yemen on its way to Saleef Harbor close to midnight.

The ship had departed from the Russian Black Sea port of Novorossiysk.

"The Turkish cargo ship with a 23-strong crew of Turkish citizens was attacked, and fortunately there were no casualties," Aksoy was quoted as saying.

"Investigation of this incident is ongoing and will be disclosed to the public after its completion," he added.

The White House also said in its statement: "This proves yet again that missile proliferation in Yemen is a real threat to all countries and underscores the need to fully enforce United Nations Security Council Resolution 2216."

The Turkish government and aid agencies have sent food, medical and other forms of humanitarian aid to the war-torn country since the start of the civil war.

Impoverished Yemen has remained in disarray since 2014, when Houthi rebels overran much of the country, including capital Sanaa.

The conflict escalated one year later when a Saudi-led Arab coalition launched a devastating air campaign aimed at rolling back Houthi gains.

Since then, the country has faced a host of public-health challenges, including a major cholera epidemic that experts blame on a lack of functioning medical infrastructure and access to clean water.