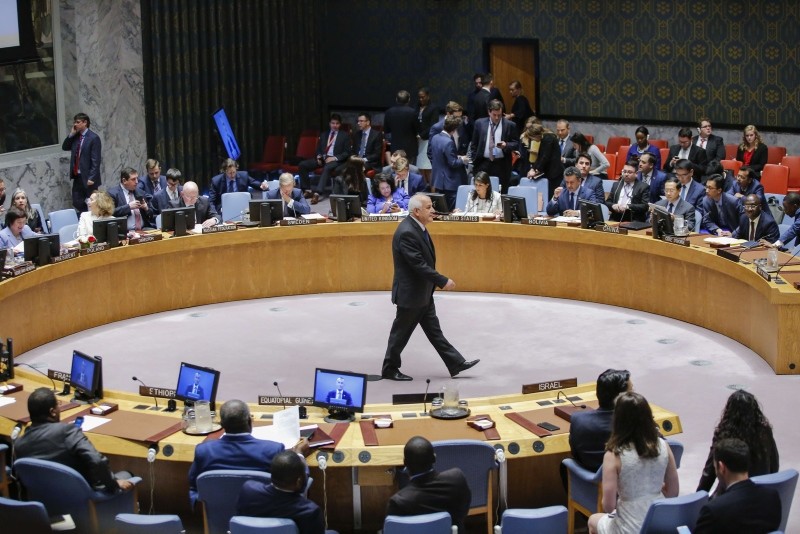 Permanent Observer of Palestine to the United Nations Riyad Mansour (C) attends the UN Security Council emergency session on Israel-Gaza conflict at United Nations headquarter on May 30, 2018 in New York City. (AFP Photo)
by Daily Sabah with Wires Jun 01, 2018 12:00 am

The United States vetoed late Friday a U.N. Security Council resolution calling for ensuring "international protection" for Palestinian civilians while another resolution written by the U.S. condemning Hamas over the recent escalation of violence in Gaza was voted down.

The U.S. was the only one that voted in favor of its own text to the council: A proposal that would condemn Palestinian resistance group Hamas for "its role in the escalation of violence in Gaza in the last two months." Eleven countries abstained while Bolivia, Kuwait and Russia opposed it.

The council met for a closed-door discussion before an expected open meeting and vote Friday, after weeks of urgent discussions about the violence.

U.S. Ambassador Nikki Haley vowed Thursday to veto Kuwait's resolution on protecting Palestinians. She called it "grossly one-sided and morally bankrupt" for demanding that the Israeli military halt "the use of any excessive, disproportionate and indiscriminate force" while not mentioning Hamas that controls Gaza.

The Security Council has been deeply divided and paralyzed over dealing with the decades-old Israeli-Palestinian conflict and the burst of violence in Gaza.

In two months of mass protests at the Gaza border, some 110 Palestinians were killed and thousands wounded by Israeli military fire.

The Kuwaiti draft resolution expresses "grave concern" at the increased violence and deteriorating situation in the Palestinian territories and calls for urgent steps to ensure a "durable and fully respected cease-fire."

It asks U.N. Secretary-General Antonio Guterres for a written report within 60 days on ways to ensure "the safety, protection and well-being of the Palestinian civilian population under Israeli occupation," including recommendations about "an international protection mechanism." The measure also urges humanitarian access and seeks "tangible steps" toward reconciliation between different Palestinian factions.

Israeli Ambassador Danny Danon called the draft biased and "not worthy of consideration by the Security Council." Neither Israel nor the State of Palestine are members of the council.

At Kuwait's request, the council has held multiple emergency meetings on the border clashes. The U.S. called an emergency session Wednesday on the barrage of rockets and mortars the day prior.