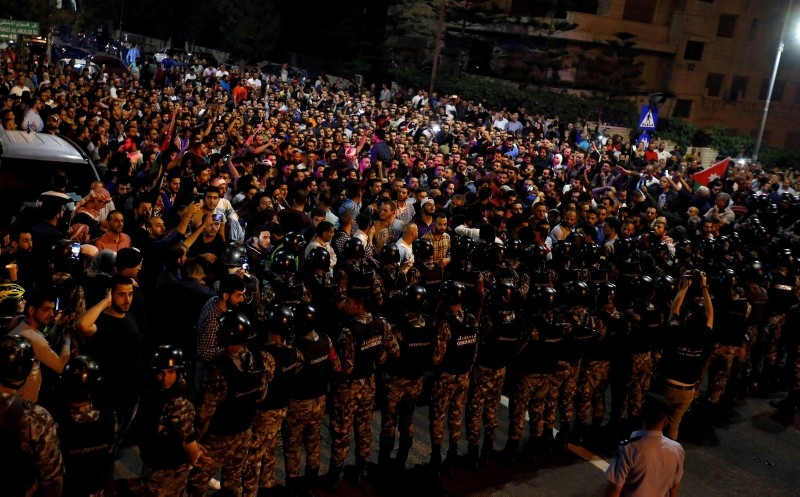 Hundreds of Jordanians demonstrated in the capital Amman for a third consecutive day on Saturday against price hikes and an income tax draft law driven by IMF recommendations to slash its public debt.

Protests have gripped the country since Wednesday, when hundreds flooded the streets of Amman and demonstrated in other cities to demand the fall of the government.

Last week the government adopted an income tax draft law, yet to be approved by parliament, aimed at increasing taxes on employees by at least 5% and on companies by between 20 and 40 percent.

It is the latest in a series of economic reforms since Amman secured a $723-million three-year credit line from the International Monetary Fund in 2016.

The loan, intended to support economic and financial reforms, has the long term objective of reducing Jordan's public debt from about 94 percent of GDP to 77 percent by 2021.

"This will be accomplished through reforms to bolster economic growth and gradual fiscal consolidation," the IMF says on its website.

Prices have steadily risen in recent years in Jordan, a country of 9.5 million which is burdened by poverty and unemployment.

On Thursday, the government announced it would raise fuel and electricity prices from Friday, sparking protests across the country. It later froze the move under orders from King Abdullah II.

But Friday night, hundreds of protesters were back on the streets outside the prime minister's office in Amman in demonstrations called by trade unions.

Some demonstrators blocked roads with their cars, while others held signs reading: "The people of Jordan will not kneel."

Protests were also held in several other cities, including Irbid and Jarash in the north, Zarqa in the east, and the southern city of Maan, which was rocked by deadly riots in the late 1980s over rising food prices.

Under the proposed new law, anyone with an annual income of 8,000 dinars ($11,000) or more would have to pay income tax, while businesses would face steep tax increases. Evaders would be heavily fined.

A majority of deputies -- 78 out of 130 MPs -- issued a statememt Friday saying they would vote against the draft legislation.

They said the income tax law does not serve the economic and social interests of the people.

Trade union representatives met on Saturday with Prime Minister Hani Mulki to demand the bill be revoked, but without any agreement.

The premier told reporters that more meetings would follow, while the head of Jordan's main union, Ali Obus, called for "the state to maintain its independence and not bow to IMF demands".