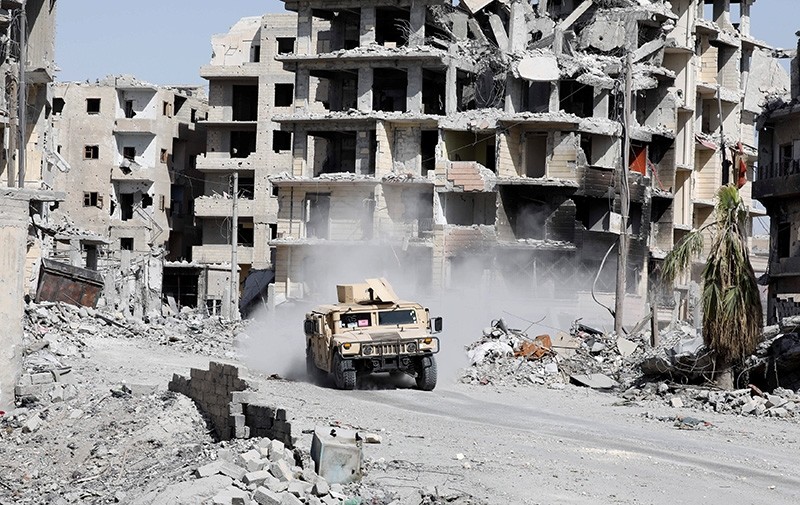 An armored vehicle of the terrorist YPG/PYD is seen along a road at the frontline in Raqqa, Syria October 8, 2017. (Reuters Photo)
by Anadolu Agency Jun 04, 2018 12:00 am
A military base hosting American and French troops in northern Syria's Ain Issa town was hit by an explosion on Sunday night, according to local sources in Raqqa on Monday.

Ain Issa in northern Raqqa is under the control of the PKK-linked People's Protection Units (YPG) terror group, the sources, who spoke on condition of anonymity due to restrictions on talking to the media, said.

The base reportedly hosts around 200 American and 75 French troops. It remains unclear if there have been any casualties following the blast.

The YPG is the Syrian branch of the PKK terrorist network, which has waged war against Turkey for more than 30 years.

The U.S. and the coalition have largely ignored the links of the YPG and Democratic Union Party (PYD) with the PKK, which the U.S. and the EU also list as a terrorist group.

Turkey has repeatedly objected to U.S. support for the terrorist YPG as a "reliable ally" in Syria, which has included supplying arms and equipment.
Last Update: Jun 04, 2018 11:41 am
RELATED TOPICS