US to intensify counter-Daesh fight in Afghanistan, top general says 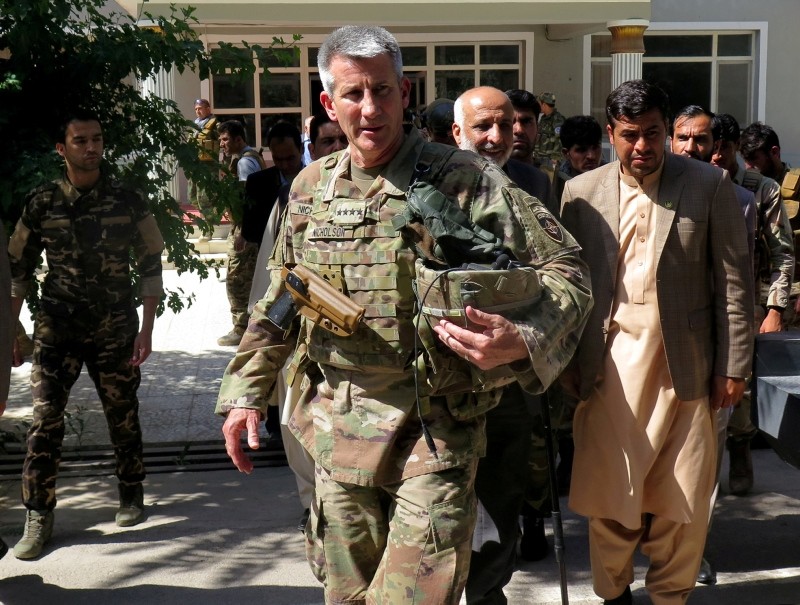 The United States intends to step up military operations against Daesh terrorists in eastern Afghanistan during a temporary ceasefire between the Afghan government and the Taliban, the top U.S. general in Afghanistan said on Friday.

Afghan President Ashraf Ghani on Thursday announced the first unconditional ceasefire with the Taliban, coinciding with the end of the Muslim fasting month. But that excludes other terrorist groups such as Daesh.

The group has developed a stronghold in Nangarhar, on the porous eastern border with Pakistan, and become some of the country's most dangerous terrorists since they appeared around the start of 2015.

"(Operations against Daesh) will continue, in fact will be even intensified during this period of ceasefire as we focus on Daesh," U.S. Army General John Nicholson, commander of U.S. and international forces in Afghanistan, told reporters.

Nicholson said the ceasefire could free resources for operations against Daesh, but some would remain to monitor the Taliban and for force protection.

Whether it remains a unilateral action or not, U.S. forces will remain prepared to respond to any Taliban attacks, Nicholson said. The U.S. has about 8,400 troops performing non-combat support for Afghan security forces fighting the Taliban; separately, several thousand U.S. combat troops are fighting al-Qaida and Daesh-affiliated groups.

"We're going to leave resources devoted to protecting our forces and watching the enemy, even those that participate in the ceasefire, as well as intensifying the pressure on Daesh," Nicholson said.

Afghan commandos, supported by U.S. Special forces and American and Afghan air power, have been carrying out an operation against the terrorists in Nangarhar.

The general said the international financial network that supports the Daesh-affiliates in Afghanistan have been "degraded" in the period since Daesh in Syria has been largely dismantled.

Nicholson, who has commanded the U.S.-led military coalition in Afghanistan since March 2016, spoke with measured optimism about prospects for compelling the Taliban to enter peace negotiations with the Afghan government.

U.S. officials have talked up the prospects for peace many times over the course of the 17-year war in Afghanistan, only to be disappointed. When President Donald Trump announced last August that he was committed to winning the war with a revamped strategy, he said the goal was to compel the Taliban — with help from Pakistan and other interested nations — to seek peace. However, a U.S. government watchdog agency recently reported that it saw few signs that this strategy was working, while acknowledging that the Afghan security forces are getting better training.

Nicholson, however, credited Trump's policy with producing early signs that the Taliban might be considering peace talks.

"I do think the policy is working. It just needs more time," he said.

Nicholson acknowledged that the war is complicated by the involvement of other outside powers, including Russia, which has said it became involved out of concern that Daesh-affiliated groups there will spread to other parts of Central Asia.

"We are concerned about any external enablement (of the Taliban)," he said. "We do believe that the Russians have increased this kind of activity." He characterized this as "small-scale support" for the insurgency.