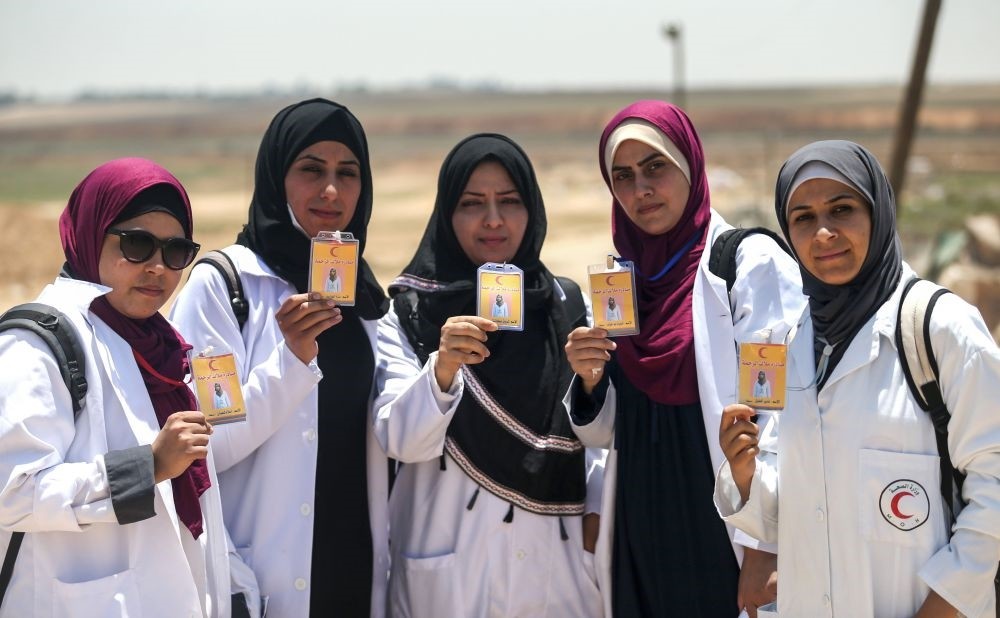 The Gaza Strip, squeezed between Israel and Egypt, is sinking deeper into hardship, with the U.S. suspension of aid worsening the humanitarian and financial tragedy

Samia Hassan used to have enough money to feed her two dozen children and grandchildren. Now she spends much of her time worrying about food, scouring Gaza's vegetable markets for end-of-day discounts or walking miles for a pot of free gruel from a soup kitchen.Large numbers of Gaza families have been pushed deeper into poverty in recent months by Palestinian political infighting and the freezing of U.S. aid. Life is tougher than ever for most of the 2 million Palestinians locked into tiny, blockaded Gaza, where electricity is off most hours of the day, unemployment approaches 50 percent and Hamas rules with a tight grip.

"It's a perfect storm," said Hilary DuBose of the Catholic Relief Services, which has had to forego emergency food distributions because the Trump administration is withholding funds. "At the same time that the humanitarian situation in Gaza is worsening, humanitarian aid is disappearing."

Growing despair in Gaza has helped drive recent Hamas-led protests against the border blockade by Israel and Egypt. The closure was imposed after Hamas seized Gaza in 2007, driving out forces loyal to Palestinian President Mahmoud Abbas.The escalating crisis also spotlights the lack of a coherent Gaza policy by the external players trying to shape its future. Israel and Egypt say they need the blockade to contain Hamas, but have not offered a viable plan for Gaza. The international community wants the blockade lifted, but hasn't said how it would deal with Hamas, which refuses to disarm or renounce violence.

Hassan - who shares her unfinished cinderblock home with seven of her 12 adult children, three daughters-in-law and 16 grandchildren - said she joined the border protests repeatedly, intentionally getting close to the fence in hopes of getting shot and killed by Israeli troops.

"Death is better than this life," she said to her sons' astonishment as the family gathered for the meal breaking the dawn-to-dusk fast of the Muslim holy month of Ramadan.Hassan said she only pulled back because she realized she could end up crippled rather than dead and become a burden. In the past two months, more than 115 Palestinians have been killed and close to 3,800 wounded by Israeli fire in near-weekly border protests, with some facing lifelong disabilities.

Hassan, who wears the black robe and full face veil of ultra-conservative Muslim women, is angry at Hamas, which has fought three cross-border wars with Israel."It's because of them," she said of her family's hard times.

In the last war in 2014, the family taxi, an important source of income, was destroyed in an Israeli airstrike on a neighbor's house. After the war's devastation, her sons only found work sporadically and one -a father of six -is now in jail for being unable to pay his debts.

The family suffered a new blow after Abbas ordered his West Bank autonomy government to curtail its regular support payments to Gaza, in hopes of pressing Hamas to hand over authority.

The Hassans used to get $500 every three months from Abbas' Palestinian Authority, but haven't been paid since the beginning of the year, along with tens of thousands of Gaza welfare recipients, said Social Affairs Ministry official Khaled Barghouti.

Meanwhile, some 60,000 former civil servants, paid by Abbas since 2007 to ensure their loyalty, have received only a fraction of their salaries since March.

With barely any money coming in, the Hassans increasingly rely on charity.

During Ramadan, Samia Hassan often walks five kilometers to another Gaza City neighborhood to line up for wheat gruel cooked in a large cauldron over an open fire.

Hassan said her sons won't make the trip, embarrassed to be seen asking for handouts, but that she doesn't mind because her face is veiled.

On a recent afternoon, dozens of people jostled, pushing their aluminum or plastic food containers to be filled. The huge pot was empty within 10 minutes.

"The situation is difficult for everyone," said Walid Hattab, 50, who owns a small coffee-and-spice store and cooks the free meals as Ramadan charity. Demand is up from last year, he said, noting that merchants have stopped selling on credit.Along with the Palestinian Authority, the U.N. has been instrumental in propping up Gaza's fragile economy. About two-thirds of Gaza's residents are eligible for health, education or welfare services from UNRWA, the agency that aids descendants of Palestinian refugees from the 1948 war over Israel's creation.

At the same time, the Trump administration has blown a $305 million hole into the agency's annual $1.2 billion budget - the result of a decision earlier this year to suspend most aid to the Palestinians until further notice. Washington has said it's linking future funding to UNRWA reforms.UNRWA has raised more than $200 million from other donors, but is still struggling. Money for Gaza food distributions could run out in a couple of months, Gunness said.

With the exception of the funds already spent this year, all U.S. assistance to the Palestinians is under review. This includes projects funded by USAID and the State Department, including health, education, good governance and security cooperation programs.

There is no indication the review will be completed any time soon, if ever, and it appears to be driven in part by Abbas' decision to boycott Washington's Mideast peace efforts as well as Palestinian moves to assert themselves at the United Nations.Charities such as Catholic Relief Services rely heavily on U.S. support. In Gaza, its operations have been underwritten by a five-year, $50 million USAID grant. This year, the charity should have received about $10 million, but hasn't gotten any money so far, said DuBose.

As a result, 20,000 Gaza families aren't receiving food vouchers and about 2,200 people eligible for job-creation programs are staying home, she said.

Muslim countries such as Qatar, Iran, Turkey and the United Arab Emirates have stepped up aid during Ramadan. Qatar is distributing 1 million meals for the month and Iran 11,000 per day.

But it's not clear if such aid will be sustained after the holy month.

On a recent evening, Samia Hassan and two dozen family members sat on the straw mat-covered floor of their home. Salad and leftover gruel from the day before had been laid out. Just before iftar, volunteers from a nearby mosque sent over a tray of rice with one chicken.

"It came at the right time," said daughter-in-law Samah, holding a toddler in her lap.Such uncertainty is tough for Samia. "Our situation has never been like this," she said.