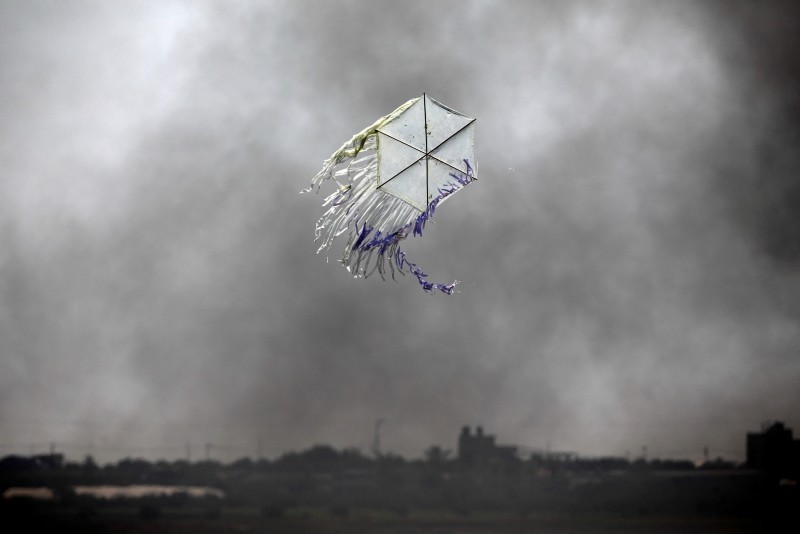 A kite flies over the border in an area where kites and balloons have caused blazes, between Israel and the Gaza strip June 8, 2018. (Reuters Photo)
by Compiled from Wire Services Jun 09, 2018 12:00 am

The Israeli army said it fired a warning shot on Saturday at a group of Palestinians preparing incendiary balloons to be launched from the Gaza Strip into Israel.

Saturday's warning shot by an Israeli aircraft is the first time the army has said it fired upon the launchers, amid mounting pressure from Israeli politicians to deal more forcefully with the issue.

"The [Israeli army] views the use of incendiary balloons and kites with explosive devices attached to them with great severity and will operate to prevent their use," the military said in a statement.

The kites have become a potent symbol of a wave of Palestinian protests that broke out on March 30 against Israel's crippling decade-long blockade of Gaza.

At least 129 Palestinians have been killed by Israeli fire since then, the majority as they approached the border fence where troops have orders to use lethal force to prevent any infiltration attempts.

The kites offer a safer way for Gazans to protest, inflicting economic losses on Israel while remaining far enough from the border to avoid being shot.

The Israeli army has been launching drones to damage or cut down the kites.

According to Israeli Defense Minister Avigdor Lieberman, of the more than 600 kites launched from Gaza so far, around 400 kites have been intercepted.