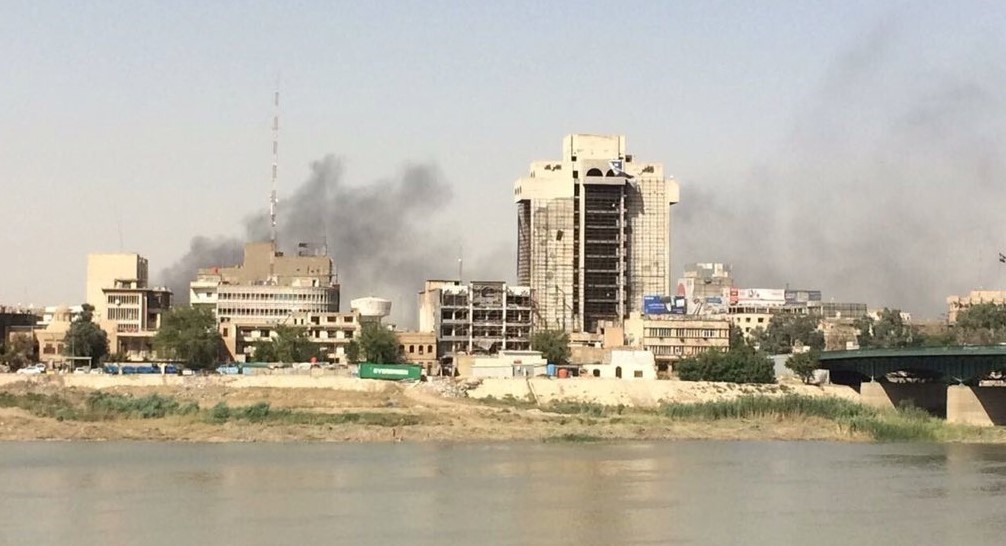 A fire ripped through Iraq's biggest ballot warehouse on Sunday where votes for the eastern Baghdad district were stored, before a recount ordered by parliament, a security official said.

The cause of the blaze was not immediately known but it comes as Iraq prepares for a manual recount of around 10 million votes following allegations of fraud during the May 12 legislative election that saw a surprise victory for populist Shiite cleric Moqtada Sadr.

The senior security official, speaking to AFP on condition of anonymity, said the fire broke out in a warehouse located in Al-Russafa, one of the largest voting districts in eastern Baghdad.

Around 60 percent of Baghdad's two million eligible voters had cast their ballots in the May election in Al-Russafa district.

A column of black smoke billowed from the warehouse and could be seen across the capital.

Two hours after the blaze erupted firefighters backed by 10 trucks were still struggling to put out the fire, an AFP reporter said.

"The room where voting machines and other election equipment were stored was destroyed by the fire," Imed Jamil, an election commission official for Al-Russafa told AFP.

"The ballot boxes were stored in another room," he said, adding that the fire would not affect the recount.

Interior ministry spokesman General Saad Maan visited the scene and told reporters that "most of the ballot boxes were stored in another building and have been preserved".

On Wednesday Iraq's parliament ordered a manual recount at all polling stations -- although no timetable has been announced -- and sacked the commission which oversaw the polls.

The election was won by Sadr's electoral alliance with communists, with long-time political figures pushed out by Iraqi voters who were hoping for change.

But the result was contested following allegations of fraud namely by the veteran politicians, including parliamentary speaker Salim al-Juburi.

According to intelligence services, tests of electronic voting machines -- used for the first time in Iraqi elections -- produced varied results, appearing to give credence to the fraud claims.

An electoral commission official and a spokesman for the interior ministry suggested that Sunday's fire did not damage ballot boxes.

"The room where voting machines and other election equipment were stored was destroyed by the fire," Imed Jamil, an electoral commission official for Al-Russafa, told AFP.

"The ballot boxes were stored in another room," he said, adding that the fire would not affect the recount.

Interior ministry spokesman General Saad Maan echoed him during a visit to the scene to the warehouse where the blaze was raging.

"Election material, including maybe ballot boxes, were burned but most of the ballot boxes were stored in another building and have been preserved," Maan told reporters.

Last month's election saw a record number of abstentions as Iraqis snubbed the corruption-tainted elite who have dominated the country since the 2003 U.S.-led invasion that toppled Saddam Hussein.

Less than half of Iraq's 24-million electorate took part, dumping the old guard in favor of Sadr's alliance followed by a list of former fighters of the Hashed al-Shaabi alliance that last year played a key role in the defeat of the Daesh terror group.

But the old guard, dumped by Iraqi voters, have clamored for a recount, although experts say it is unlikely to produce a major change in the number of seats won by their rival lists.

On Wednesday, Iraq's outgoing parliament also sacked the nine-member independent commission which oversaw the polls, and on Sunday they were replaced by nine judges who would supervise the recount.

The previous week parliament had already voted to annul the ballots of displaced Iraqis and those living abroad, although they accounted for only a small fraction of the overall vote.