More than 600 killed in heavy fighting on Yemen's western coast 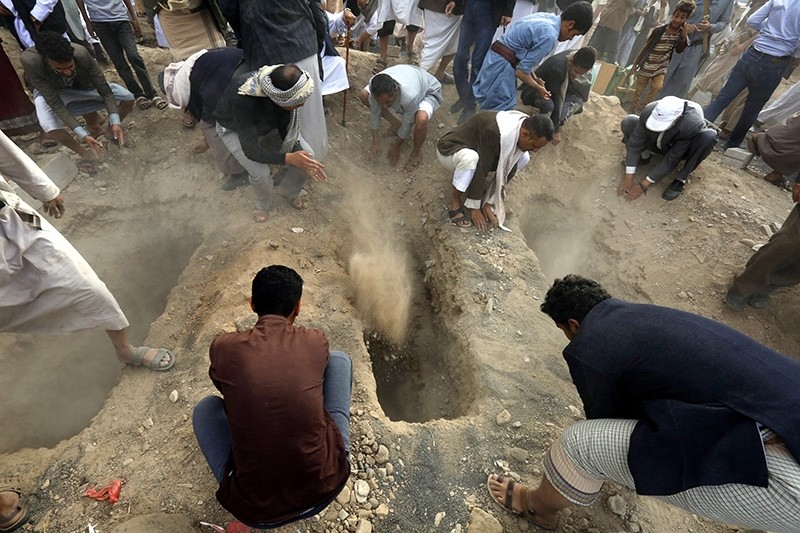 Yemenis bury the bodies of Houthi rebels allegedly killed during recent fighting at Yemen's western coast areas, during the funeral procession at a cemetery in Sanaa, Yemen, June 9, 2018. (AFP Photo)
by Compiled from Wire Services Jun 11, 2018 12:00 am

Heavy fighting in Yemen between pro-government forces and Houthi rebels has killed more than 600 people on both sides in recent days, security officials said Monday.

Government forces, backed by a Saudi-led coalition, have been advancing along the western coast in recent weeks as they battle the Iran-allied rebels, known as Houthis. The fighting has escalated as government forces close in on the Red Sea port of Hodeida, a vital lifeline through which most of Yemen's food and medicine enters.

"At least 250 members of the Houthi militia were killed in battles and coalition raids in the past seven days," the army's September.net website, citing military sources.

A total of 143 Houthi rebels have also been captured during the clashes, it added.

The Houthi militia has yet to comment on the claim.

Witnesses, who spoke on condition of anonymity for fear of reprisals, said the fighting has forced dozens of families to leave their homes.

Last week, the Houthis claimed to have killed more than 70 Yemeni soldiers in an ambush in Al-Hudaydah province, but a Yemeni military commander said that only 19 soldiers had been killed.

The United States urged all parties of the conflict to ensure humanitarian access to the Yemeni people, Secretary of State Mike Pompeo said Monday. The U.S., he said, is closely following developments in Hodeidah and urged Emirati leaders to preserve "the free flow of humanitarian aid and life-saving commercial imports."

The United Nations warned Friday that a military attack or siege on Hodeida would affect hundreds of thousands of civilians. Some 600,000 people live in and around the city.

International aid group Doctors Without Borders said Monday the Saudi-led coalition has attacked a cholera treatment center in the northern province of Hajja.

The group, known by its French acronym MSF, has temporarily frozen its activities in the area, "until we guarantee the safety of our staff and patients," said João Martins, MSF's head of mission in Yemen tweeted.

Yemen has been embroiled in a civil war pitting the coalition against the Iran-backed Houthis since March 2015. The coalition aims to restore the government of self-exiled President Abed Rabbo Mansour Hadi.

The three-year stalemated war has killed more than 10,000 people and displaced more than 3 million. It has damaged Yemen's infrastructure, crippled its health system and pushed the Arab world's poorest country to the brink of famine.

The U.N. considers Yemen to be the world's worst humanitarian crisis, with more than 22.2 million people in need of assistance. Malnutrition, cholera and other diseases have killed or sickened thousands of civilians over the years.