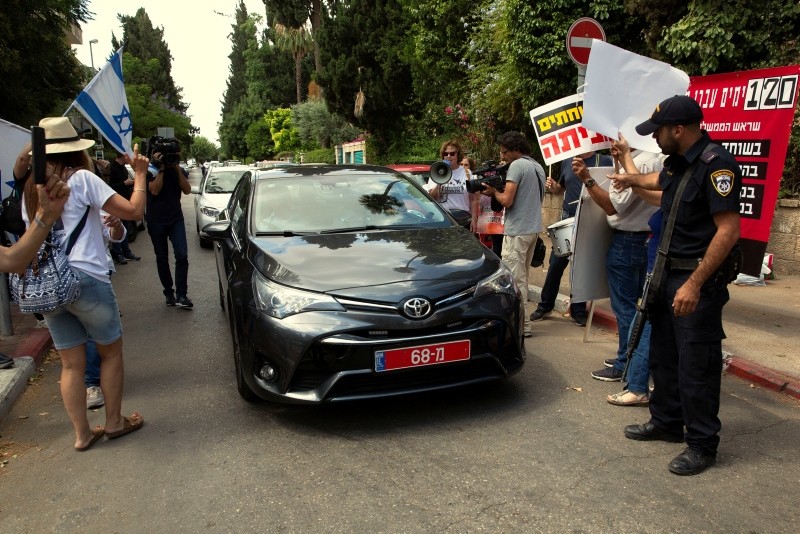 A vehicle carrying police officers pulled up at the entrance of the prime minister's official residence, where a clutch of protesters called for Netanyahu to resign over the investigations.

Investigators grilled Netanyahu at his residence in West Jerusalem over suspicions that he awarded favors to Israel's telecom company Bezeq Telecom Israel in return for favorable coverage on Walla news site the company's owner controls.

Netanyahu, who has been questioned twice before in so-called Case 4000, and Bezeq have denied wrongdoing.

Netanyahu has been the subject of criminal investigations in separate corruption cases. He has also repeatedly denied any wrongdoing, describing the probes as a media with hunt

In February, Israeli police recommended that Netanyahu be indicted for alleged corruption, saying there was now sufficient evidence to formally charge him in two separate graft cases.

The first case, known as Case 1000, involves Israeli Hollywood producer Arnon Milchan, who was allegedly asked to purchase luxury items for Netanyahu and his wife Sara. He is suspected of bribery over gifts from wealthy businessmen, which police say were worth nearly $300,000.

The second, Case 2000, relates to an alleged deal -- again for favorable media coverage -- with Arnon Mozes, publisher of Hebrew-language daily Yedioth Ahronoth, which is Israel's biggest newspaper. The case includes offers to take measures to curtail the circulation of a rival daily.

Israel's Attorney-General Avichai Mandelblit has yet to decide whether to press charges against the prime minister.

In both those cases, lawyers for Netanyahu said he has committed no crimes.

Despite the probes, the right-wing leader's popularity has risen in the past few weeks, a reflection, commentators said, of his tough security policies, U.S. withdrawal from the Iran nuclear deal he opposes, and the opening of the American Embassy in contested Jerusalem, a move Netanyahu has long advocated.

The surveys predicted that Netanyahu's Likud party, which heads a coalition largely comprised of right-wing and religious factions, would add up to four seats to the 30 it already holds in the 120-member parliament if an election were held now.

Israel is due to hold its next national ballot no later than November 2019.