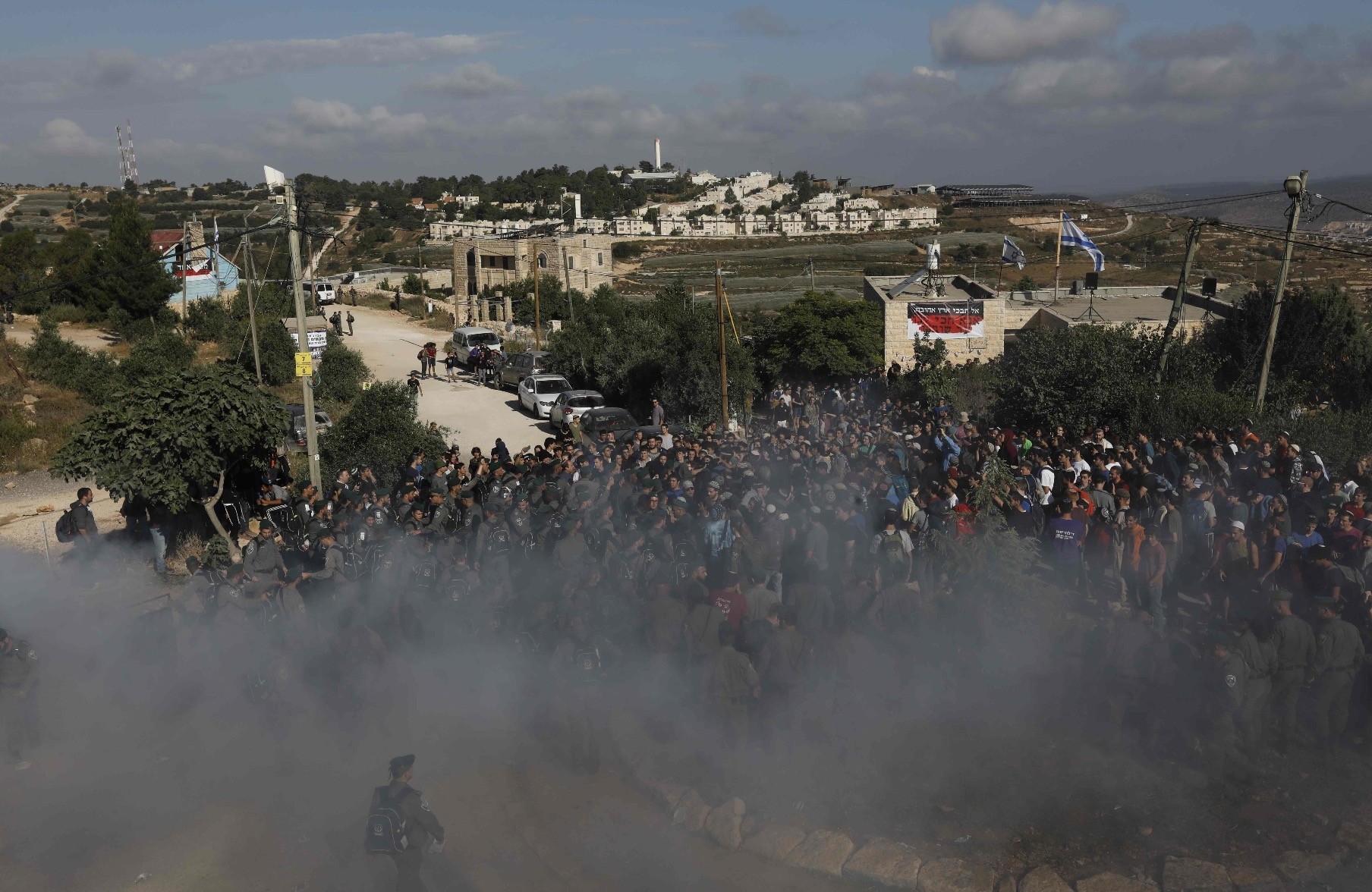 Israeli settlers scuffle with Israeli security forces at Netiv Hau2019avot settlement near Bethlehem in the occupied West Bank, June 12.
by Compiled from Wire Services Jun 13, 2018 12:00 am

Hundreds of Jewish settlers clashed on Tuesday with Israeli police ahead of the evacuation of an illegal outpost in the occupied West Bank. Angry settlers barricaded themselves inside a number of buildings to be demolished at the Netiv Ha'avot outpost in Gush Etzion near Hebron in the southern West Bank, according to Israeli daily Yediot Ahronoth. Protesters set fire to tires and garbage cans and began shoving the police, while dozens of them clashed with border police forces, the newspaper said.

Israel's High Court of Justice ordered the demolition of 15 homes illegally built on private Palestinian land after a petition filed by Israeli movement Peace Now, which includes names of Palestinian petitioners who own the land. The evacuation and demolition of the settlement homes came after a more than decade-long legal battle in which seven Palestinians, aided by an anti-settlement NGO, have sought the return of the lands. After the eviction, Israeli forces are expected to demolish the structures. The government says it will compensate the residents and rebuild their homes on nearby lands that are not privately owned.

Netiv Ha'avot is a settlement outpost, meaning it was built without government approval. Most settlements in the Israeli-occupied West Bank are established with government support and largely built on lands Israel does not consider to be owned by Palestinians.

Settlement supporters are calling for 350 new homes to be built in the area in response to the demotion.

"We hope these evictions will send a clear message that crime does not pay, and that anyone who builds on land without authorization or even purchasing it first will ultimately be compelled to leave," Peace Now, the anti-settlement NGO which petitioned the High Court alongside the Palestinian landowners, said, as reported by dpa.

"We call upon the relevant security bodies to allow the rightful Palestinian landowners, who have waited 17 years, to return to their land following the evictions," the NGO said.

Settlements are one of the most heated issues in efforts to restart Israeli-Palestinian peace talks, frozen since 2014. The international community regards all Israeli settlements in occupied Palestinian territories to be illegal and a major obstacle to Middle East peace. The area, captured by Israel in 1967, is not sovereign Israeli territory and Palestinians there are not Israeli citizens and do not have the right to vote. Some 500,000 Israelis live in the West Bank and East Jerusalem, areas that are also home to more than 2.6 million Palestinians. Palestinians have long argued that Israeli settlements could deny them a viable and contiguous state. Israeli watchdog group Peace Now reported earlier this year that settlement construction has surged under the Trump administration, which has taken a softer stance than his predecessors. According to a report issued by the group earlier in March, construction began on 2,783 new housing units on the occupied West Bank in 2017, a 17-percent increase from the yearly average since 2009.