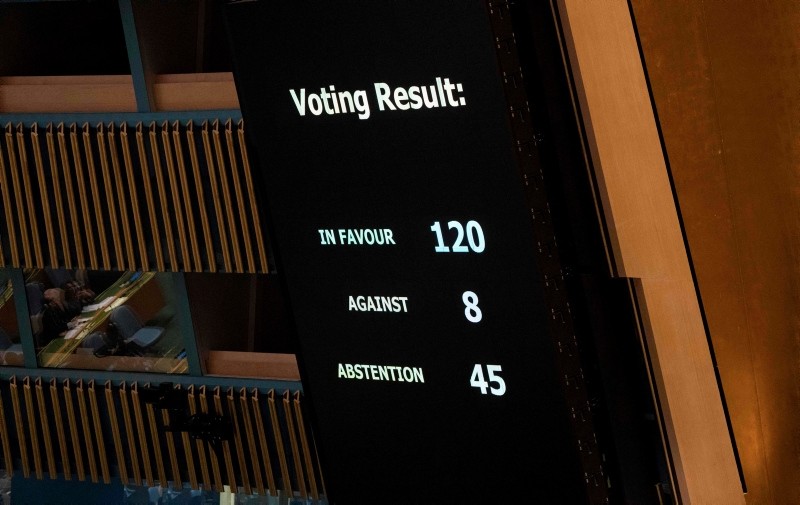 Palestinian President Mahmoud Abbas on Thursday hailed a U.N. General Assembly vote calling on Israeli forces to halt violence against Palestinian protesters in the Gaza Strip, while Israel condemned the vote as biased.

"It is a victory for justice and international law," Abbas told Palestine's official WAFA news agency.

He also appreciated and thanked the U.N. member countries who had voted in favor of the resolution.

"The adoption of a resolution in the UN General Assembly demanding protection for the Palestinian people is a great achievement and victory that shows that the world's nations stand by Palestinian rights," Foreign Minister Riyadh al-Maliki said.

The Turkish and Algerian-sponsored resolution passed in the General Assembly with 120-8 votes. In all, 45 countries abstained.

The resolution blamed Israel for the recent deaths of Palestinians in the Gaza Strip and urged the international community to consider protections for Palestinian civilians.

The countries that voted against the resolution include the U.S., Israel, Australia, the Marshall Islands, Nauru, Togo, Solomon Islands and Micronesia.

The U.N.'s focus on Israel "brings shame to the organization," Israeli Prime Minister Benjamin Netanyahu's office said in a statement.

Turkish President Recep Tayyip Erdoğan said the U.S. had once again been disappointed with the adoption of the resolution.

"This is a major victory for justice and the rights of Palestinians. Turkey will continue to stand by Palestine," Turkish top aide Ibrahim Kalın also tweeted.

"It's a historic decision that underlines that Palestine is an issue of the whole world," the minister tweeted.

Since March 30, 123 Palestinians have been killed and scores injured by Israeli forces in demonstrations, according to the Gaza Health Ministry.