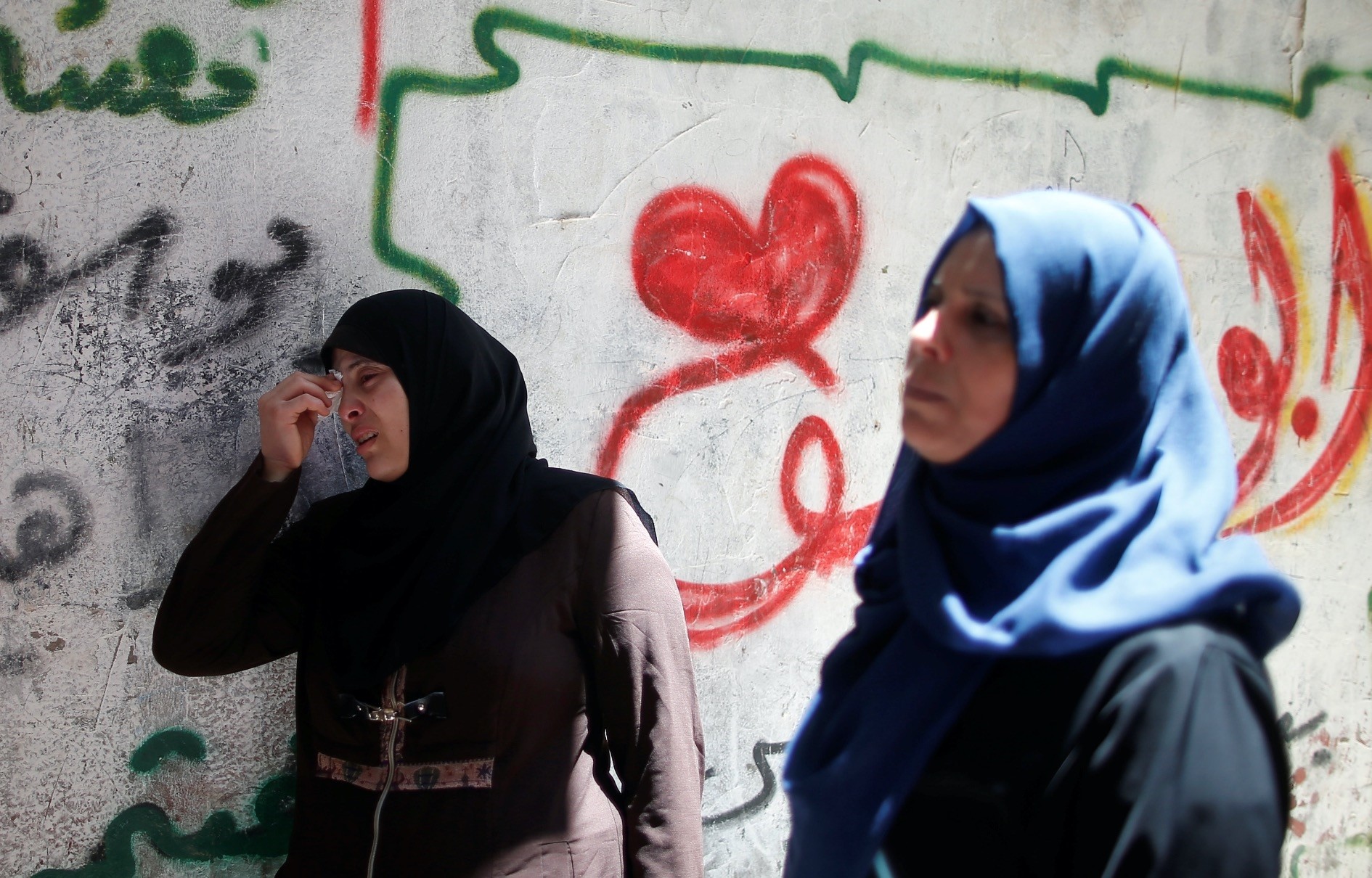 Relatives of a Palestinian who was killed by Israeli troops during protests at the Israel-Gaza border, mourn during his funeral, Gaza City, June 9.
by Compiled from Wire Services Jun 15, 2018 12:00 am

Together with the U.S., Israel remained isolated in the U.N. as the Turkish and Algerian-sponsored resolution, that blames Israel for the recent deaths of Palestinians in the Gaza Strip, overwhelmingly passed in the U.N. General Assembly

The United Nations General Assembly on Wednesday adopted by a strong majority of 120 countries a Turkish and Algerian-sponsored resolution condemning Israel for Palestinian deaths in Gaza and rejected a U.S. bid to blame Hamas for the ongoing violence.The resolution, backed by Turkey on behalf of the Organization of Islamic Cooperation, and Algeria on behalf of the Arab League, "deplores the use of any excessive, disproportionate and indiscriminate force by the Israeli forces against Palestinian civilians in the Occupied Palestinian Territory, including East Jerusalem," and demands Israel "refrain from such actions."

It further calls "for the consideration of measures to guarantee the safety and protection of the Palestinian civilian population," pointing particularly to Gaza, where at least 130 Palestinians have been killed and thousands more injured by Israeli military fire during mass demonstrations. The resolution passed in the General Assembly in a 120-8 vote. In all, 45 countries abstained.

France was among 12 EU countries that backed the resolution, but Britain abstained along with Italy, Poland and 13 other EU member-states. Russia and China voted in favor. Australia, the Marshall Islands, Micronesia, Nauru, the Solomon Islands and Togo joined the United States and Israel in voting against the resolution.

Following the resolution's adoption, President Recep Tayyip Erdoğan said during a live TV broadcast, "The U.S. is disappointed once again."

Also commenting on the decision, Turkish presidential aide İbrahim Kalin called it "a big success" for the Palestinian cause and justice.

Turkey's Foreign Ministry also said that members of the prudent international community had shown once again that the Palestinian people would never be left alone.

"We expect the U.N. Secretary General to immediately fulfill the requirements of the resolution to ensure that the perpetrators of massacres on Palestinian civilians are held accountable," it added.

Meanwhile, U.S. Ambassador Nikki Haley dismissed the resolution as "one-sided" and accused Arab countries of trying to score political points at home by seeking to condemn Israel at the U.N.

"For some, attacking Israel is their favorite political sport. That's why we are here today," Haley told the assembly.

An amendment presented by the United States that condemned Hamas for "inciting violence" along the border with Gaza failed to garner the two-third majority needed for adoption.

Arab countries backing the measure turned to the General Assembly after the United States used its veto in the Security Council to block the resolution on June 1. Unlike the Security Council, resolutions adopted by the assembly are non-binding and there is no veto. Early this month, the same draft resolution was vetoed by the U.S. in the U.N. Security Council. The General Assembly last held a similarly contentious vote on the Israeli-Palestinian conflict in December when it rejected President Donald Trump's decision to recognize Jerusalem as Israel's capital and move the U.S. Embassy there.

Israel and Hamas have fought three wars in Gaza and the U.N. has warned that a fourth conflict could be easily ignited.

The protests in Gaza were to be the biggest yet in a week-long campaign against a decade-old blockade of the territory. They mark the culmination of a campaign, led by Hamas and fueled by despair among Gaza's 2 million people, to break the decade-old border blockade of the territory imposed by Israel and Egypt after Hamas seized control of Gaza in 2007. Palestinians took to the streets of the occupied West Bank on Tuesday to mark the 70th anniversary of the "Nakba" or "Catastrophe." Waving Palestinian and black flags, hundreds marched in the city of Ramallah to the Beit Eil checkpoint north of the city. As they marched, demonstrators held sculptures of 70 keys and banners bearing the text of U.N. Resolution 194 that guarantees Palestinian refugees the right to return to their homes.