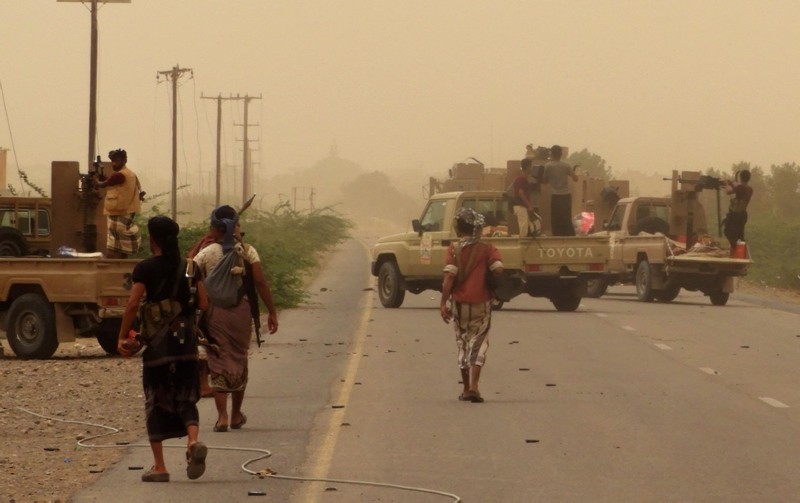 Engineers worked from Saturday morning to clear mines from areas around Hodeida International Airport, just south of the city of some 600,000 people on the Red Sea, the military of Yemen's exiled government said.

Yemen's Shiite rebels known as Houthis, who hold the country's capital of Sanaa, did not immediately acknowledge losing the airport.

However, the Houthi-run Al Masirah satellite news channel aired footage it described as being from near Hodeida showing a burned-out truck, corpses of irregular fighters and a damaged Emirati armored vehicle. The Iranian-aligned fighters rifled through a military ledger from the vehicle before chanting their slogan: "Death to America, death to Israel, damn the Jews, victory to Islam!"

The Saudi-led coalition began its assault Wednesday on Hodeida, the main entry for food into a country already on the brink of famine. Emirati forces are leading ground forces mixed with their own troops, irregular militiamen and soldiers backing Yemen's exiled government. Saudi Arabia has provided air support, with targeting guidance and refueling coming from the U.S.

International aid groups and the United Nations cautioned the Saudi-led coalition from launching the assault. Their fear is that a protracted fight could force a shutdown of Hodeida's port at a time when a halt in aid risks tipping millions into starvation. Some 70 percent of Yemen's food enters via the port, as well as the bulk of humanitarian aid and fuel supplies. Around two-thirds of the country's population of 27 million relies on aid and 8.4 million are already at risk of starving.

For its part, the Saudi-led coalition says it had no choice but to launch the assault as the port provided millions of dollars for the Houthis through customs controls. They also accuse the Houthis of using the port to smuggle weapons through, something a U.N. panels of experts described in January as "unlikely" as incoming ships require U.N. permission and are subject to random searches.

The U.N. and Western nations say Iran has supplied the Houthis with weapons, from assault rifles to the ballistic missiles they have fired deep into Saudi Arabia, including at the capital, Riyadh.

The coalition has blocked most ports, letting supplies into Hodeida in coordination with the U.N. The air campaign and fighting have disrupted other supply lines, causing an economic crisis that makes food too expensive for many to afford.

Aid agencies and the U.N. evacuated international staff from the city ahead of the offensive. Some of the wounded able to flee are driving onto Aden, some 315 kilometers (195 miles) away, after being stabilized at a hospital in Mocha on the way, the aid group Doctors Without Borders said. The local hospital in Hodeida already is struggling to help the wounded, the group said.

Thousands remain besieged in the city and around the airport due to the fighting.

"Families are trapped inside and it is difficult leaving as they are coming under airstrikes and bombardment by both parties of the war," relief worker Saber Wasel told The Associated Press. "It was a hard night for citizens because of the intensity of the strikes and gunfire."

The Houthis seized control of Sanaa in September 2014, later pushing south toward the port city of Aden. The Saudi-led coalition entered the conflict in March 2015 and has faced criticism for a campaign of airstrikes killing civilians and destroying hospitals and markets.