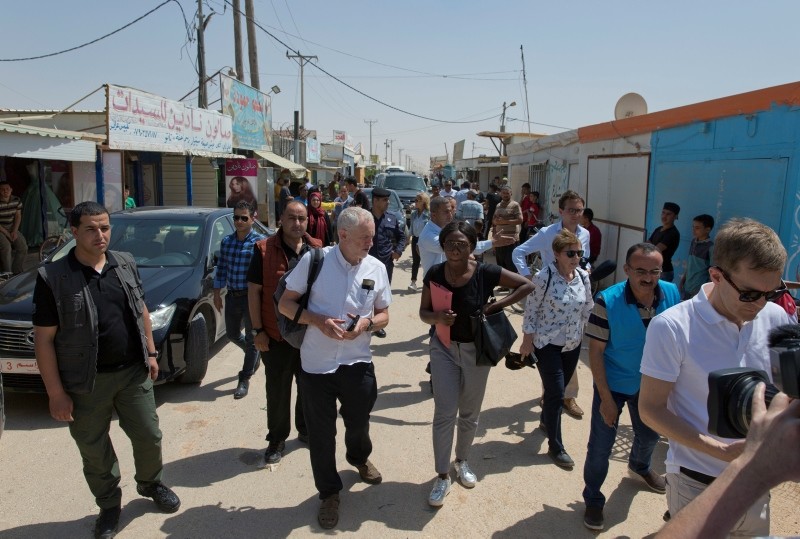 British opposition leader Jeremy Corbyn, who is visiting camps for Syrian and Palestinian refugees, said Friday that a Labour government under his leadership would recognize a Palestinian state "very early on."

He spoke during his first international trip outside Europe since he was elected Labour Party leader in 2015.

Corbyn said during a tour of the Zaatari camp for Syrian refugees that Britain could do more to take in displaced Syrians, particularly unaccompanied children. He said government efforts have been "very, very small" compared to others in Europe, including Germany.

On Saturday, he is to visit a decades-old camp for Palestinians who were forced to leave their country due to the Israeli occupation. Corbyn's a vocal supporter of the state of Palestine. Corbyn said a Labour government would quickly recognize Palestine "as a full state as part of the United Nations."

Opinion polling suggests the two parties are neck and neck. Britain is not scheduled to have another election until 2022, but there could be an early vote if May's fragile minority government suffers a major defeat in Parliament.

With his visit to Jordan, Corbyn appeared to be burnishing his foreign policy credentials.

Taking questions from reporters in the Zaatari market, he said that a Labour government would "work very, very hard to regenerate the peace process" in Syria. He said two parallel sets of talks about a solution for Syria would need to "come together," but did not offer specifics.

Without a solution in Syria, "the conflict will continue, more people will die in Syria and many many more will go to refugee camps, either here in Jordan or come to Europe or elsewhere," he told The Associated Press.