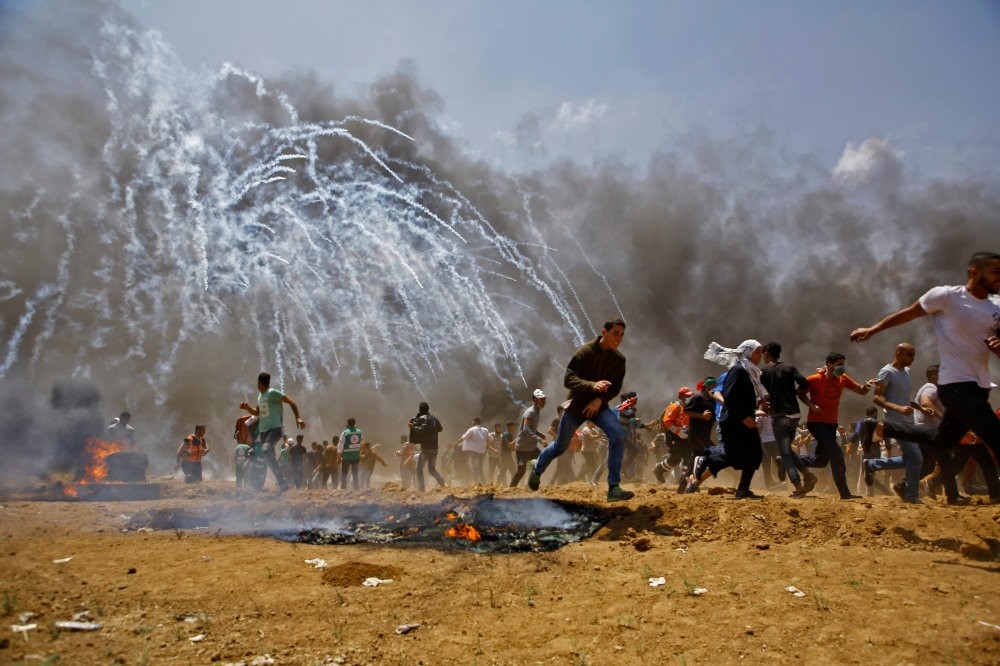 Palestinians run for cover from tear gas during clashes with Israeli security forces near the border between Israel and the Gaza Strip, May 14, 2018.
by Compiled from Wire Services Jun 22, 2018 12:00 am

Israeli Prime Minister Benjamin Netanyahu said Israel could step up its "intensity" on Gaza, after a new flare-up that saw Israel carrying out airstrikes and Palestinians launching rockets and mortar shells. The latest spike in tensions follows weeks of deadly protests and clashes along the Gaza-Israel border as well as the worst military escalation last month since a 2014 war. The move came as U.S. President Donald Trump's special envoy Jason Greenblatt and adviser Jared Kushner visit the region to discuss issues including the Palestinian-Israeli peace process.

Late Wednesday, Netanyahu warned that Israel's response to these repeated attacks would "intensify if necessary", as reported by Anadolu Agency. He went to assert that Israel was "prepared for any scenario and our enemies must understand this".

Israeli Public Security Minister Gilad Erdan said yesterday that Israel might be forced to launch a "large-scale military operation" in the Gaza Strip. He told Israeli Army Radio: "I don't want to launch an operation, but there is a good chance that we will have no other option."

Energy Minister Yuval Steinitz, for his part, was more straightforward. "We can't know how or when it will end, but it looks like we are on the way to an escalation," he said.

Tensions have soared in Gaza since mass protests and clashes broke out along the border on March 30. At least 132 Palestinians have been killed. There have been no Israeli fatalities. Palestinians are demanding the right to return to the homes their families fled or were expelled from during the 1948 war surrounding the creation of Israel.

Israel has defied international condemnation over the Palestinian deaths, maintaining the use of live ammunition is necessary to defend its borders and stop infiltrations. However, the escalation of violence in the Gaza Strip places the besieged enclave on the "brink of war," the United Nations reported, condemning Israeli use of force against Palestinians. Israel was sharply criticized by a U.N. human rights body for killing protesters in Gaza and treatment of the Palestinians, declaring it a "war crime" under the Statute of Rome. The high casualty toll triggered a diplomatic backlash against Israel and new charges of excessive use of force against unarmed protesters.

Israel and Hamas have fought three wars since 2008 and observe a tense cease-fire that is regularly shaken by hostile acts. Peace talks between Israel and the Palestinians have been stalled since 2014.

On Wednesday Greenblatt and Kushner were in Saudi Arabia where they met Crown Prince Mohammed bin Salman and discussed Gaza and "the Trump administration's efforts to bring peace between the Israelis and Palestinians," according to a White House statement. The duo's regional tour started in Jordan and will also take them to Israel, Egypt and Qatar. Trump's controversial December decision to recognize the disputed city of Jerusalem as Israel's capital prompted Palestinians to freeze all contacts with U.S. officials.