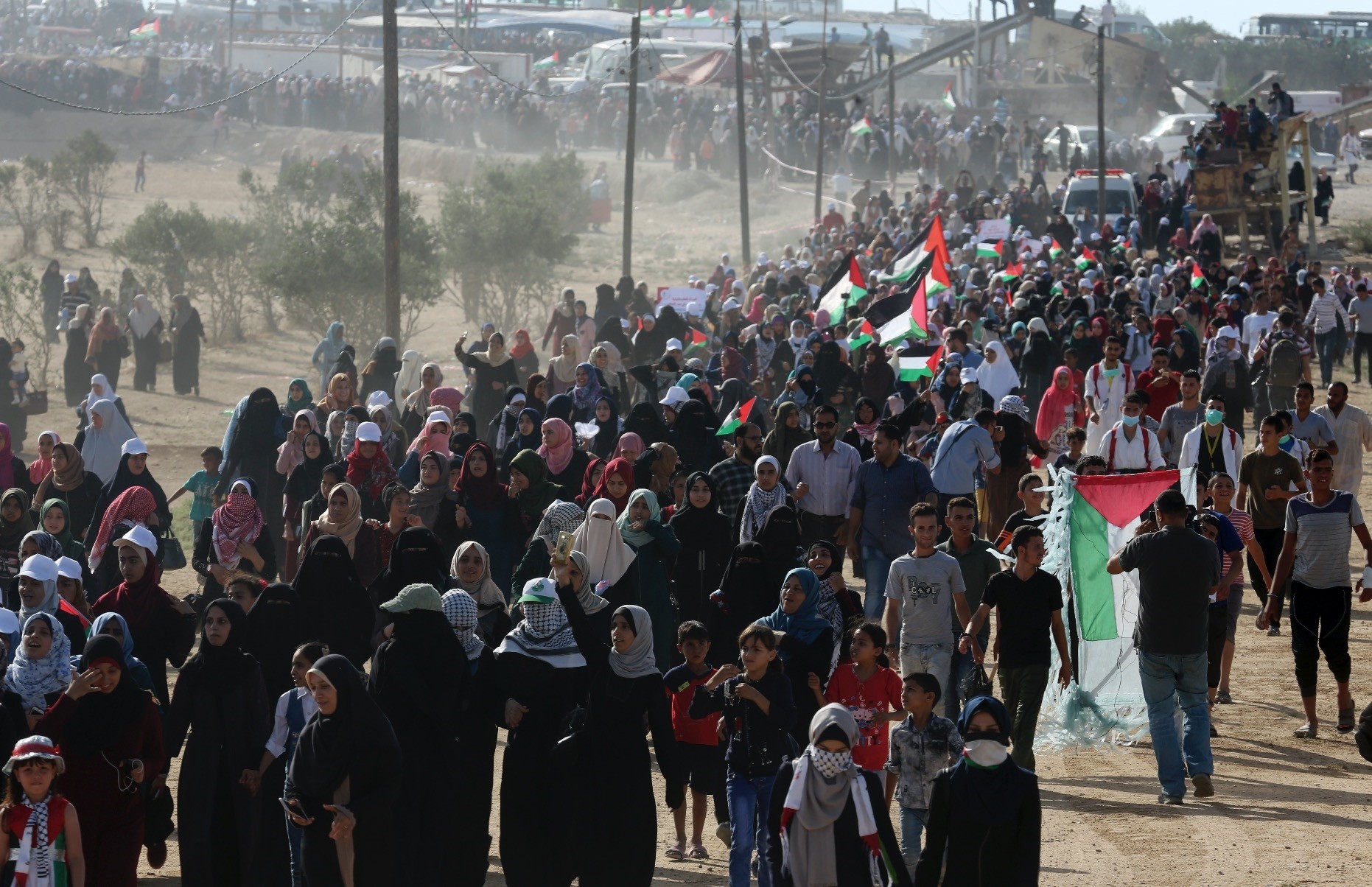 Palestinian women wave their national flags while marching toward the Gaza Stripu2019s border with Israel, July 3.
by Compiled from Wire Services
Jul 05, 2018 12:00 am

The Israeli army violently targeted a Palestinian women's march along the besieged Gaza Strip, the first mass women's demonstration to take place in the strip since March 30

Hundreds of Palestinian women faced Israeli violence along the Gaza-Israel security fence while taking part in ongoing demonstrations against Israel's decades-long occupation. The protest was their first mass mobilization since protests erupted on the border three months ago. During the protests, at least 134 Palestinians were wounded by Israeli gunfire, according to the Palestinian Health Ministry.

"[At least] 134 Palestinians were injured and affected by gas due to the Israeli army's intervention on a women's march on the eastern Gaza border," Health Ministry spokesman Ashraf al-Qidra said.

In a statement, the women's committee of Gaza's National Authority for Breaking the Siege called on Palestinian women to take part in the rallies, which began on March 30. "We are demonstrating today for a just cause: to end the years-long blockade of Gaza and return to our land that has been stolen by Israel," committee member Iktimal Hamad told Anadolu Agency (AA). "Palestinian women have paid dearly for Palestine," she added. "We will not give up our land or our legitimate rights."

The Israeli army shot a young Palestinian who was waving a Turkish flag, AA correspondents reported from the scene. Despite his injury, the Palestinian continued to hold the Turkish flag, while he was being transferred by medical staff to the ambulance. During the protests, many young people raised the Turkish flag and held pictures of Turkish President Recep Tayyip Erdoğan as a show of support and love for Turkey.

Since near-weekly mass protests began along the Israel-Gaza border, more than 135 Palestinians have been killed by Israeli army fire. The overwhelming majority of the dead and wounded have been unarmed, according to Gaza health officials.

Palestinians have held near-weekly protests since March 30, calling for a "right of return" to ancestral homes now in Israel. According to the U.N., among the dead are children, journalists, medics and many young unemployed men. Approximately, 12,000 have been injured. Over 1,000 children have been injured by Israeli forces in the besieged Gaza Strip during demonstrations, according to the U.N. Children's Fund (UNICEF).

Israel has long been facing international criticism for its harsh response to mass Palestinian protests. Rights groups have branded open-fire orders as unlawful, saying they effectively permit soldiers to use potentially lethal force against unarmed protesters. Israel was sharply criticized by a U.N. human rights body for killing protesters in Gaza and treatment of Palestinians, declaring it a "war crime" under the Statute of Rome. The high casualty toll triggered a diplomatic backlash against Israel and new charges of excessive use of force against unarmed protesters.