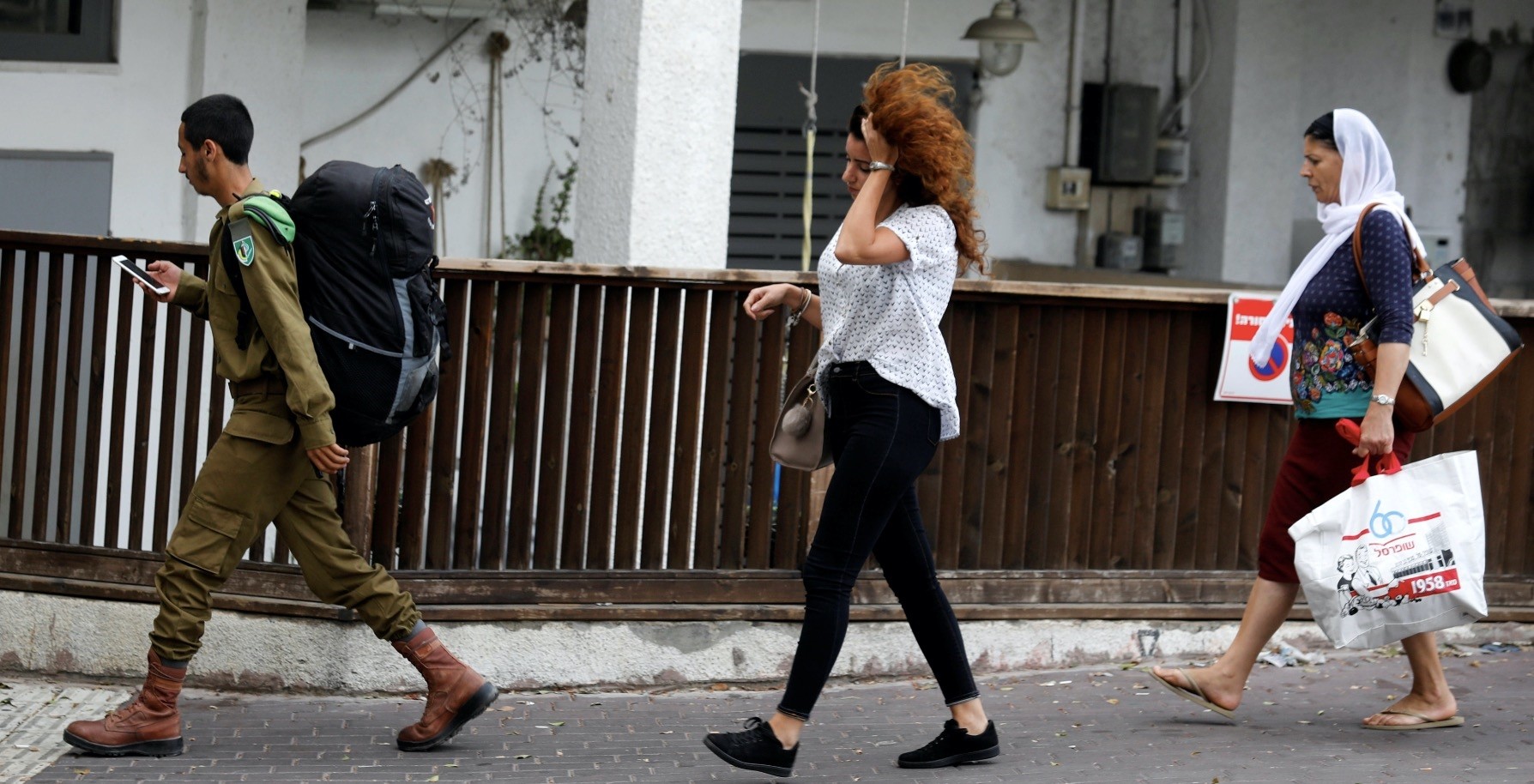 An Israeli soldier from the Druze minority walks past others in the Druze town of Daliat al-Karmel, northern Israel, Aug. 2.
by Compiled from Wire Services Aug 04, 2018 12:00 am

Israel's new "nation-state" law has provoked anger among members of its most integrated minority, the Druze, prompting Prime Minister Benjamin Netanyahu to seek corrective legislation. Israel's Druze minority is outraged over a recently passed law that declared Israel as the exclusive homeland of the Jewish people.

The law, which downgrades Arabic from an official language on a par with Hebrew and deems only Jewish settlement as a national priority, has prompted announcements by several Druze that they would no longer serve in uniform. A third Druze officer resigned from the Israeli army on Wednesday in protest, Israel's public broadcaster Kan reported, despite a call from Army Chief of Staff Gadi Eisenkot "to keep controversial political issues out of the military." At a separate event in northern Israel, a Druze man had to be forcibly removed by police after he confronted and heckled one of the law's main proponents, lawmaker Avi Dichter of Netanyahu's Likud party who had started giving a speech.

Israel's Arab minority – 20 percent of the population – has also slammed the law, but the Druze community's concerns have garnered more sympathy from the right-wing governing coalition. The Druze, numbering around 120,000 in Israel, have had special status since the 1950s, when they were drafted into the military, unlike Israel's Muslim and Christian populations.

Netanyahu has defended the law, which declares that only Jews have the right of self-determination in the country, from fierce criticism at home and abroad. But his conservative government appears to have been blindsided by the response from the Druze community, even though Parliament passed the law on July 19 after years of heated debate in the Knesset. In a further effort to calm tensions, Netanyahu convened a meeting with Druze community leaders in Tel Aviv late on Thursday, but it was cut short because one of the participants, a retired senior military officer, had harshly criticized the legislation, Israeli media reported.

Druze leaders are divided over whether the proposals will calm the tensions. A large rally by the Druze and their supporters is planned at a main Tel Aviv plaza for the weekend.

Tourism Minister Yariv Levin, one of the committee members, said legislation would be presented when parliament returns for its winter session in mid-October."To my delight, the Druze community has accepted the outline. We have agreed to work on the details and bring a set proposal to a vote," he told the Ynet web site, as reported by Reuters. This would enshrine the Druze's special status within Israeli society, recognize their service to the state and boost funding for their towns, villages and community institutions. Education Minister Naftali Bennett of the ultra-nationalist Jewish Home party also praised the Druze.

"The Druze community does not have to prove to anybody its loyalty to the state of Israel or the strength of the bond between us. Seventy years of statehood prove this beyond any doubt," he wrote on Facebook.

Druze opposition lawmaker Salah Saed of the Zionist Union said he was not sure the crisis had been averted. "I have read the new proposal, and I can live with it, but the problem is that I don't believe the prime minister," Saed said, fearing Israel could face early elections before the legislation is finalized. Elections are set for November 2019. "[Netanyahu] is stringing us along. ... We will not play into the hands of this government," Saed added.