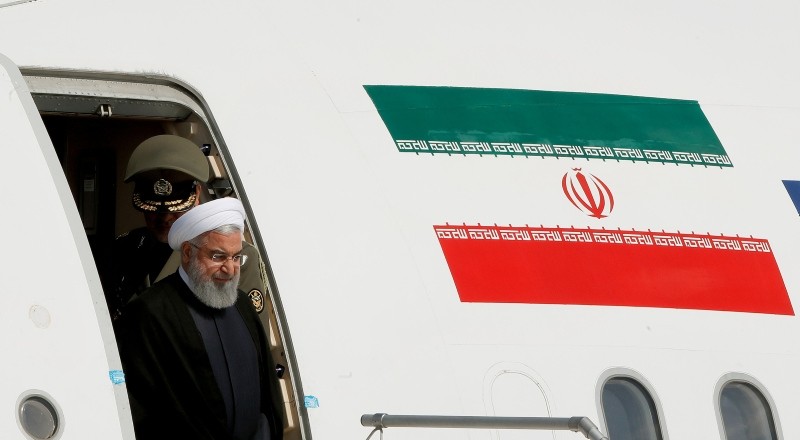 Iranian President Hassan Rouhani disembarks from a plane upon his arrival at the airport in Zurich, Switzerland, July 2, 2018. (REUTERS Photo)
by Compiled from Wire Services Aug 06, 2018 12:00 am

Iranian President Hassan Rouhani dismissed a U.S. call for talks on Tuesday, the eve of the imposition of new sanctions that follows Washington's decision to pull out of an agreement over Iran's nuclear programme.

The United States is due to impose new sanctions against Iran on Tuesday intended to cripple its economy, implementing President Donald Trump's decision to break with European allies and exit the 2015 agreement.

Washington has said the only way Iran could avert the sanctions would be to agree to new negotiations over its missile and nuclear programs.

"We are always in favor of diplomacy and talks ... But talks need honesty," Rouhani said in a speech broadcast live on state television.

"If you're an enemy and you stab the other person with a knife and then you say you want negotiations, then the first thing you have to do is remove the knife."

Rouhani also said the country will stay true to a 2015 deal and noted that Iran has the support of the other five parties to the deal - Britain, China, France, Germany and Russia - which will help keep the deal alive.

"Despite the sanctions, we will prove that we stick to our word and honour international deals," Hassan Rowhani said in an interview on state broadcaster IRIB, calling the renewed sanctions part of a "psychological war" being waged by America.

Under the 2015 agreement, Iran agreed to curbs on its nuclear program in return for the lifting of economic sanctions. The Trump administration argues that the curbs did not go far enough and it wants to force Iran back to the negotiating table.

Iran says that by abandoning the agreement Washington has shown it cannot negotiate in good faith. Last Month, Trump said that he would be willing to meet Rouhani without preconditions to discuss how to improve relations.

Senior Iranian officials and military commanders have rejected Trump's offer of talks as worthless and "a dream", saying his words contradicted his action of reimposing sanctions.