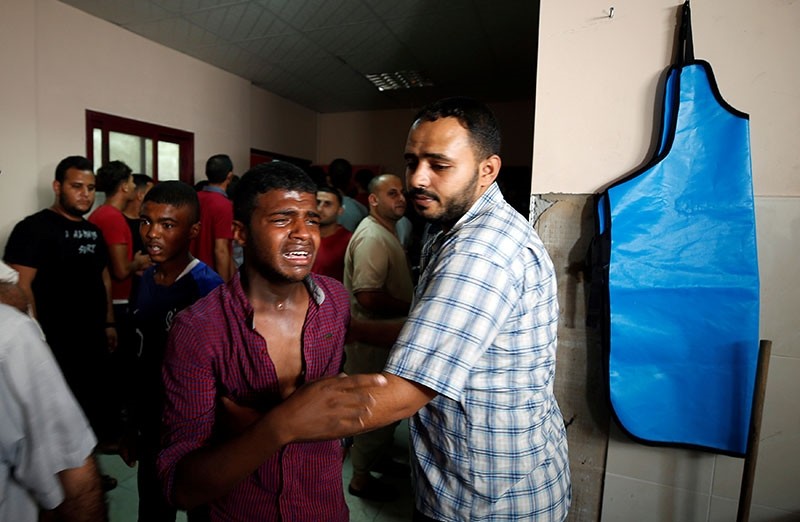 A relative of a Palestinian who was killed in Israeli tank shelling, reacts at a hospital in the northern Gaza Strip, August 7, 2018. (Reuters Photo)
by Anadolu Agency Aug 07, 2018 12:00 am

At least two Palestinians were killed on Tuesday when the Israeli army shelled a site affiliated with Hamas in the northern Gaza Strip, the Palestinian Health Ministry said in a statement.

Asharaf al-Qidra, spokesman for Palestinian Ministry of Health said that, so far, the bodies of two Palestinians have arrived in Gaza's Indonesia Hospital.

Ambulances carried a number of injured from the site of the attack in the town of Beit Lahia, eyewitnesses told Anadolu Agency.

The Israeli army said in a statement that "terrorists" had fired shots towards its soldiers "near the northern Gaza Strip from a Hamas post."

The statement added that an Israeli army-affiliated tank then "targeted the post from which the shots were fired."

No injuries to Israeli army troops were reported, the Israeli statement said.

Ezzeddine al-Qassam Brigades, the military wing of Hamas, for its part, said that the two Palestinians were Abdulhafeth Silawi 23, and Ahmad Murjan 23 from the Jabalia camp in the northern Gaza strip and they belong to the brigades.