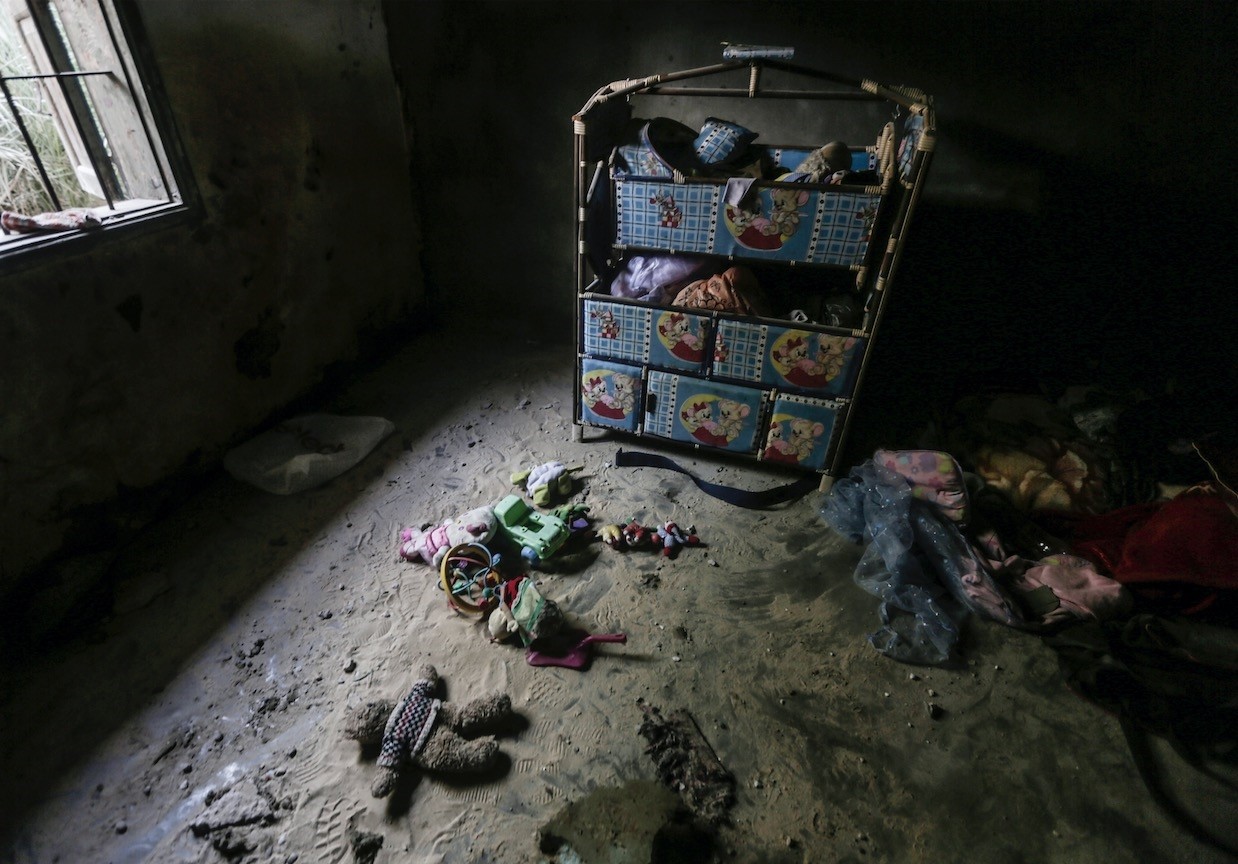 The photograph shows the damage that Israeli airstrikes did to the house of the Khammash family in Deir Al Balah town in the central Gaza Strip on Thursday.
by Compiled from Wire Services Aug 09, 2018 12:00 am

The people of Gaza have been victims of another Israeli attack. The 23-year-old pregnant Palestinian mother, Enas Khammash, and her 18-month daughter Bayan were among those killed

Israel carried out a major wave of strikes across the Gaza Strip overnight, leaving three Palestinians including Enas Khammash, 23, and her 18-month-old daughter Bayan dead in another severe flare-up of violence, officials said Thursday.

According to the Health Ministry in the Hamas-controlled enclave, Kammash and her daughter were killed in an airstrike in Jafarawi in central Gaza, the ministry said, while her husband was injured. The ministry said Khammash was also pregnant and at least 12 others were injured. It was the third severe flare-up of violence since July and came despite attempts by U.N. officials and Egypt to secure a long-term truce between Israel and Hamas.

The three flare-ups, which follow months of tensions due to protests and clashes along the Gaza border, have raised fears of a fourth war between the two sides since 2008. Israel's military said it targeted more than 140 Hamas "military sites." It said Israel was targeted by around 150 rockets from late Wednesday into Thursday. Twenty-five of them were intercepted by air defense systems, according to the army.

The Palestinian government has issued a statement calling for immediate international intervention to stop Israel's aggression against the blockaded enclave.

"The Israeli government and the U.S. administration are responsible for the escalations in the Gaza Strip and for the continuation of the 11-year-long blockade [of Gaza]," government spokesman Yousuf al-Mahmoud said in the statement.

"The grave threats facing the Palestinian cause require [inter-Palestinian] reconciliation and the immediate restoration of national unity by fully empowering the government in the Gaza Strip as called for by the Egypt-brokered agreement," he said.

Meanwhile, Hamas spokesman Abdel-Latif Kanou said in a statement, "Increasingly frequent artillery barrages into Gaza and the targeting of civilians is intentional."

"The [Israeli] occupation will bear the consequences of its actions and pay the highest price for its crimes," he added. "The Palestinian resistance has been forced to adopt a defensive posture and is doing its duty by repelling this aggression against our people."

The Ezzeddin al-Qassam Brigades, Hamas's armed wing, claimed responsibility for the rocket attacks, which came after two of its fighters were killed Tuesday by Israeli strikes inside Gaza.

Nickolay Mladenov, the U.N. envoy for the Middle East conflict who has been seeking to negotiate a long-term truce between Israel and Hamas, said he was "deeply alarmed" and called on all sides to "step back from the brink."

"For months I have been warning that the humanitarian, security and political crisis in Gaza risks a devastating conflict that nobody wants," he said in a statement. "Our collective efforts have prevented the situation from exploding until now. If the current escalation is not contained immediately, the situation can rapidly deteriorate with devastating consequences for all people."

Earlier the same day, the Israeli army shelled a Hamas position in Gaza in retaliation for an alleged Palestinian attack on Israeli military equipment deployed near the buffer zone.