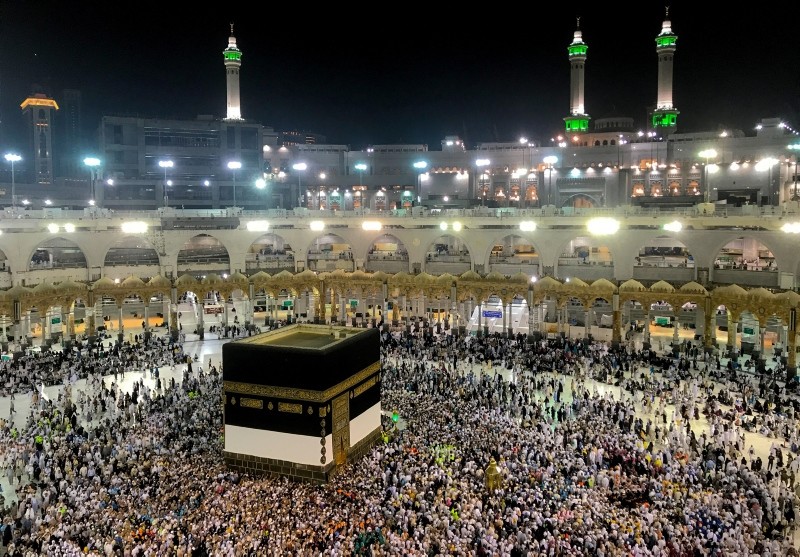 As Saudi Arabia prepares to host more than three million Muslims in Islam's holy city of Mecca for their sacred Hajj duty, security measures including crowd-management features have been finalized and presented to international media.

This year, this massive crowd will be moving from the giant tent camp in Mina Valley to Mount Arafat, from Arafat to Muzdalifa, then from Muzdalifa back to Mina and eventually to the Grand Mosque of Mecca. This year the Hajj will take place between Aug. 19 and 24.

Invited by the Ministry of Media, foreign journalists were able observe firsthand the huge efforts put on by Saudi authorities to prevent any possible unwanted incident, ranging from terrorist attacks to stampedes, from marring this year's Hajj.

Located inside the Grand Mosque of Mecca complex, the Crowd Management Operation Room is filled with giant screens showing the mass movements of the pilgrims and accompanying security units under the watch of thousands of cameras.

The room is of central importance to the Hajj, Ahmadi told AA, adding that the entire Hajj area has very well-trained units to cope with all kinds of extraordinary situations and protect participants from all potential dangers. "The units have been deployed in several positions in the Kaaba and other holy sites. They share all developments and changes with the [control] room on a 24-hour basis and act according to their directives," he said.

Ahmadi said that it is Allah's blessing that a grave incident had not taken place in the Al-Haram Mosque, or Great Mosque of Mecca; fully equipped units working with great devotion and a finely tuned action plan lay behind this success.

The commander of the special forces deployed for the security of the Masjid Al-Haram, Maj. Gen. Abdullah bin Mohammed Al-Aseemi, said that his forces perform the duty of ensuring safety of all sites in the complex and keep a watchful eye over all entrances.

About 1.7 million people from around the world perform the tawaf ritual around the Kabaa, and each one is monitored and calculated through electronic methods. When the Mataf – the area around the Kabaa – is fully occupied, the crowd is shifted to the ground and the first floor, where a designated track is available for the disabled and elderly people. In order to ensure a peaceful transfer from the Mataf and to avoid possible panic, separate internal and external doors in the Mataf are also present.

Al-Aseemi pointed out that in case of a sudden increase in the number of pilgrims, his team distributes the pilgrims through the internal and external doors in a balanced manner, for their safety. All of these arrangements are implemented through the electronic system. He further added that his teams also assist the elderly, as well as escorting other pilgrims.

Aseemi also pointed out to the key role played by the expansion project in terms of accommodating the large number of worshippers here.

The Jamarat Bridge, where the pilgrims carry out the stoning of the walls representing Satan, was one of the deadliest places in the Hajj due to stampedes. When dealing with a large number of people in the Jamarat at the same time, Aseemi says that the control center keeps constant track of the number of pilgrims present on the bridge, which now consists of five floors. One of these five floors is allocated for disabled people, where their data is automatically viewed and their presence is observed through onscreen graphs in the control center, in order to protect them from any possible dismay.

Major Youssef Meshal al-Subayni from the Command Control Center in Mecca said that every group of worshippers is accompanied by officers from the moment of their arrival to the Holy Land until their departure. He said that these officers support guidance in terms of complaints or the provision of warnings, adding that even if a pilgrim needs a blanket, it is immediately provided.

He also explained that the center contains a data collection department, which offers a report on how to avoid errors on a day-to-day basis.

The National Center for Security Operations (911), also working on a 24-hour basis, is responsible for attending to complaints and reports received from the holy sites and also classifying these complaints. The Director of the Center, Col. Walid Salem Abu Shanab, said that the center receives around 45,000 reports every day, out of which some 10 percent are for crime reports; the rest of the reports include traffic accidents or airport delays. There are four major halls in the center – the first hears the complaints of males, the second for females, the third is for forwarding these reports and complaints to related agencies and fourth is for crisis management.

At the 911 headquarters, phone operators can handle calls in numerous languages and dialects. Saudi women with a high level of professional expertise also work in the center on a 24-hour basis.

The National Center for Security Operations provides security services based on information, data, and reports received from the security agencies. Along with this, it plays the role of consolidating the efforts of these different institutions, and if required, it also fulfils the responsibility of coordinating between the security agencies and government departments or private institutions. The Center also monitors emergency situations to understand the need of intervention.

Abu Shanab also said that the system under which the center operates is considered an extremely powerful electronic system in terms of receiving information on a global level; as soon as information is reported, the information itself and the location of the person reporting is detected. The data received is immediately forwarded within moments to the relevant organization. It is worth mentioning that all pertinent institutions are available in the center, whether it concerns electricity, health, the Red Crescent, or Hajj and Umrah.

There is also a comprehensive administrative department specializing in Hajj at the center. This department is responsible of administering Mecca, Mina, Arafat and Muzdalifa during Hajj through a camera system and also carries out the supervision of Umrah arrangements during the holy month of Ramadan.

Abu Shanab emphasized the fact that the Interior Minister is available 24-hours a day in person at the Center for the monitoring of the process of receiving information and complaints during the Hajj season.