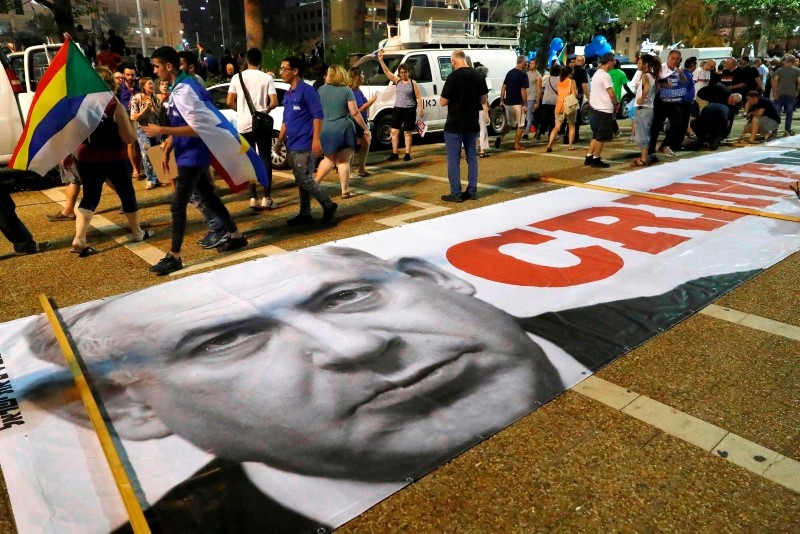 A banner with a political message and a picture of Israeli Prime Minister Benjamin Netanyahu is spread on the ground as protesters rally against the 'Jewish Nation-State Law' in Tel Aviv on August 4, 2018. (AFP Photo)
by Compiled from Wire Services Aug 10, 2018 12:00 am

Almost two thirds of Israelis are unhappy with Prime Minister Benjamin Netanyahu's policies vis-à-vis the Gaza Strip, according to a recent opinion poll.

The poll, results of which were published Friday by Israeli daily Maariv, shows that as many as 64 percent of Israelis are "dissatisfied" with Netanyahu's approach to the blockaded territory.

According to the survey, which was conducted by Panels Politics, a Tel Aviv-based consulting firm, 29 percent of respondents said they were "satisfied" with the prime minister's Gaza policy, while another 7 percent declined to give an opinion.

The poll also revealed a split among Israelis over recent calls for another large-scale military assault on the Hamas-run strip, with 48 percent saying they would support such an operation.

Forty-one percent of respondents voiced opposition to the notion of another major assault, while 11 percent declined to register their opinion.

According to Maariv, the survey included a random sampling of 512 Israelis with an error rate of 4.3 percent.

Calm returned to Gaza and neighbouring areas of Israel Friday after a deadly flare-up between Palestinians and the Israeli military, but fresh protests could test the embryonic truce.

Thursday had seen extensive Israeli raids in retaliation for the launching of more than 180 rockets and mortar rounds by Hamas and its allies on Wednesday night.

Three Palestinians were killed in the Israeli strikes, including a mother and her baby, while seven Israelis were wounded by Palestinian rocket fire as hundreds took refuge in bomb shelters.

It was one of the most serious flare-ups since the 2014 Gaza war and followed months of escalating tensions.

Late on Thursday, an Israeli air raid flattened a five-story building which hosted a cultural center in Gaza City but which the army said was used by Hamas security forces.