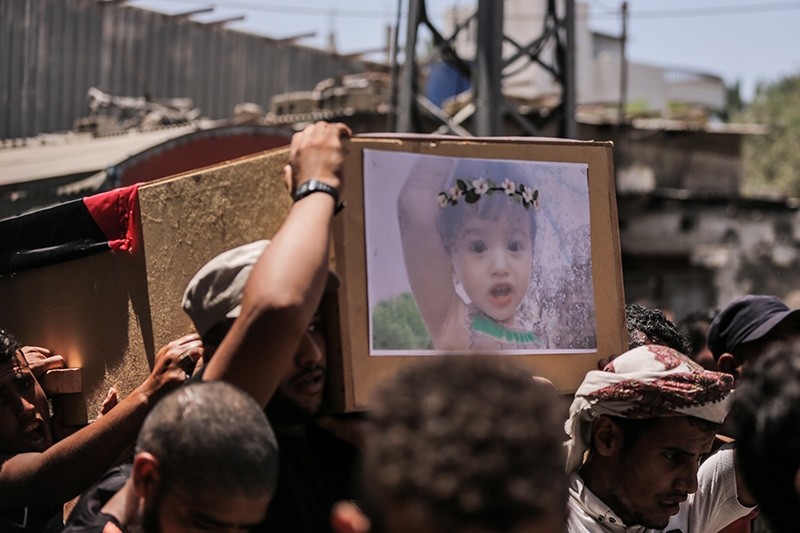 Palestinians carry a coffin of 23-year-old Enas Abu Khammash and her eighteen-month daughter during their funeral in Deir al Balah town in the central Gaza Strip, Aug. 9, 2018. (EPA Photo)
by Daily Sabah Aug 10, 2018 12:00 am

BBC News on Thursday bowed to pressure from Israel to reword the title of an article on the killing of a pregnant Palestinian woman and her infant daughter by Israeli airstrikes on the Gaza Strip.

The British public service broadcaster had published an article titled, "Israeli air strikes 'kill pregnant woman and baby,'" referring to the 23-year-old Palestinian and her 18-month-old daughter who were slain in overnight strikes.

Not long after, Israel's Foreign Ministry spokesman Emmanuel Nahshon tweeted a "formal complaint" over the title, writing: "This title is a deliberate misrepresentation of reality ( that's the polite equivalent of " this is a LIE" if you don't get it)."

.@BBCWorld this is a formal complaint by @IsraelMFA .This title is a deliberate misrepresentation of reality ( that's the polite equivalent of " this is a LIE", if you don't get it). Israelis were targeted by Hamas and IDF acts to protect them.Change it IMMEDIATELY!!! @IsraelMFA pic.twitter.com/pqjXuopXgO

BBC caved into the bullying, editing the title to: "Gaza air strikes 'kill woman and child' after rockets hit Israel."

A BBC spokesperson explained the change by stating, "Although the original headline was not factually incorrect, we updated it to add more context to the story."

Israel carried out a major wave of strikes across the Gaza Strip overnight, leaving three Palestinians including pregnant mother Enas Khammash and her 18-month-old daughter Bayan dead in another severe flare-up of violence. Khammash's husband and 12 others were also injured in the attack.

"Bayan was sleeping with her mother and father. The rocket hit their house and smashed it, you can see the damage," said Abdullah Khammash, 31, a cousin of the woman and child killed.

In a statement, the Israeli army claimed to have struck at least 140 targets across the Gaza Strip in recent days, going on to assert that Gaza-based resistance groups had fired 80 rockets into southern Israel -- 25 of which were intercepted -- over the same period.